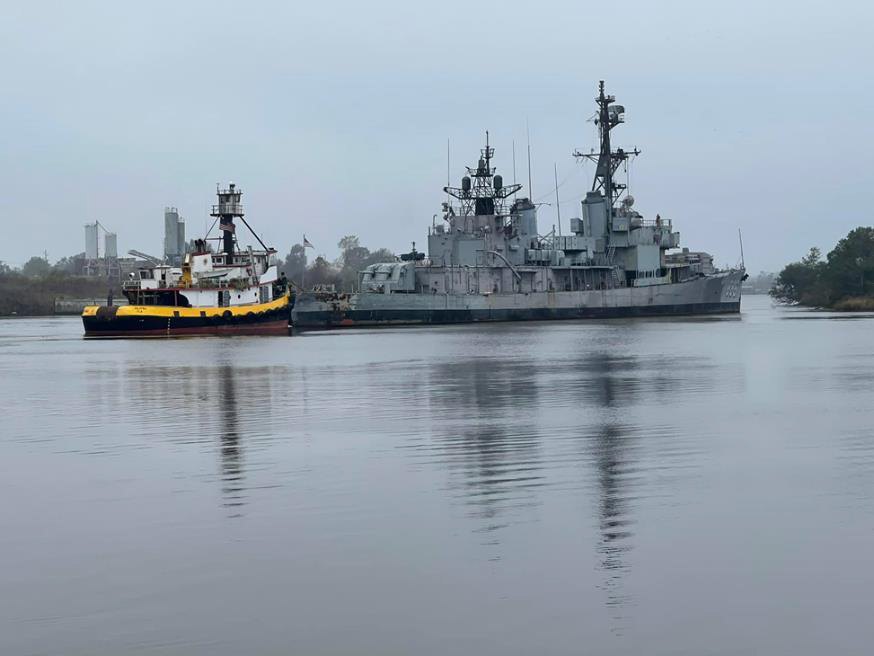 Courtesy photo The Orleck Museum Ship being pulled away from her original home on the Calcasieu River in Lake Charles, Louisiana.

Jacksonville, Florida – The Jacksonville Historic Naval Ship Association (JHNSA), parent owner of the future Jacksonville Naval Museum, has started the towing of the USS Orleck Naval Museum to drydock. The JHNSA took advantage of an opening in the drydock schedule. This is a critical step in the process of verifying the ship is able to continue to serve as a museum ship and is within the financial means of the JHNSA. This will also help satisfy the development agreement requirement of having evidence the ship is sound to serve as a museum ship in Jacksonville.

The USS Orleck departed Lake Charles, Louisiana on Wednesday, December 15, 2021. The Orleck arrived at Port Arthur, Texas on Thursday, December 16. Smith Maritime Incorporated, of Green Cove Springs, is the company provided the tow. The cost of this first tow is $105,000. While in Port Arthur, the ship will be put into drydock at the Gulf Copper and Manufacturing Corporation for inspection, hull strengthening, and preservation. The drydocking took place on Friday, December 17. The preservation will be cleaning of the hull and painting of the exterior of the ship from top to bottom. This work is expected to take 30 days, with the dry dock working days taking place Monday through Saturday and closed for holidays. This will position the Orleck’s tow for Jacksonville in mid-January with an arrival in late-January. The tow to Jacksonville is expected to take approximately 10 to 12 days.

The costs to JHNSA to bring the Orleck to Jacksonville has gone up considerably since the last estimate done in March of 2020. With $250,000 of new repairs needed from last year’s Hurricane Laura, cost increases for materials, fuel and labor – the project costs in the shipyard now stands at an estimated $1.8 million plus $65,000 for paint. This is up from previous estimates of $1.3 million for the shipyards and $56,000 for paint from 18 months ago. The JHNSA is grateful to have recently just received $100,000 donation in October from an out of state Navy Veteran who supports strongly JHNSA’s mission to create a naval museum and help save the historic USS Orleck. Since January of 2020, JHNSA has spent approximately $164,000 on the Orleck for inspections, ship insurance, towing down payment, and other needs.

In dry docking the Orleck will receive an inspection of the hull to ensure it is capable of continued to service as a museum ship. It is expected the JHNSA will know the status of the inspection by Tuesday, 21 December. Should the hull be found beyond the JHNSA financial means for restoration, the decision will then be made by the Orleck Association with concurrence of the JHNSA to salvage the ship for scrap.

In Jacksonville, the ship will be moored stern in, starboard side to the 600’ long “Pier 1”. This is adjacent to the Berkman Marina along East Bay Street in the old Shipyards area of the Sports and Entertainment District in downtown, Jacksonville. The arrival date in Jacksonville has not been set and will be notified by future press releases. Once moored the JHNSA will continue to prepare the museum ship for opening as the Jacksonville Naval Museum.  The “pier-side” preparation work is expected to be two to four weeks in length but may be extended as needed. Prior to the ship’s arrival, work will be done to prepare the pier. A separate modular building with ticketing, gift shop, and restrooms will be put on hold by request of the Downtown Investment Authority (DIA). The DIA has asked JHNSA to wait until plans are worked out for the Shipyards area.

The Jacksonville Naval Museum will feature the “US Navy Cold War Experience”, which is represented by the ex-USS Orleck. The Orleck, a WWII era Gearing Class destroyer, was heavily modified under the Fleet Rehabilitation and Maintenance (FRAM II) program in the early 1960’s. The Orleck embodies the Korean War, Vietnam War, and Cold War periods in US Navy history having served in all three. The steam powered, twin propeller, 4 boiler Orleck is much smaller than today’s modern-day gas turbine powered destroyers with a length of only 390 feet, 41’ wide beam, an “air draft” of 109’ at the top mast with a current empty displacement of approximately 2,350 tons. Having such a long and prolific service history the Orleck is the most decorated post-World War II ship ever built and was awarded 18 battle stars. After the Orleck’s US Naval service, she was transferred to the Turkish Navy and renamed the Yüctepe (D 345). She continued to serve until being transferred back to the United States in August of 2000 to become a museum ship.

The Jacksonville Naval Museum will honor past generations of Veterans and inspire future Patriots through STEM plus history education opportunities. The museum will serve as a gathering place for Naval Associations, crew reunions, and military conventions while supporting Veterans as a local resource and networking center. Future initiatives may include a Tall Ships Festival or Navy Fleet Week; increasing tourism to downtown Jacksonville.