What Made Orange Great : Jack Tar Orange House was luxury on the river 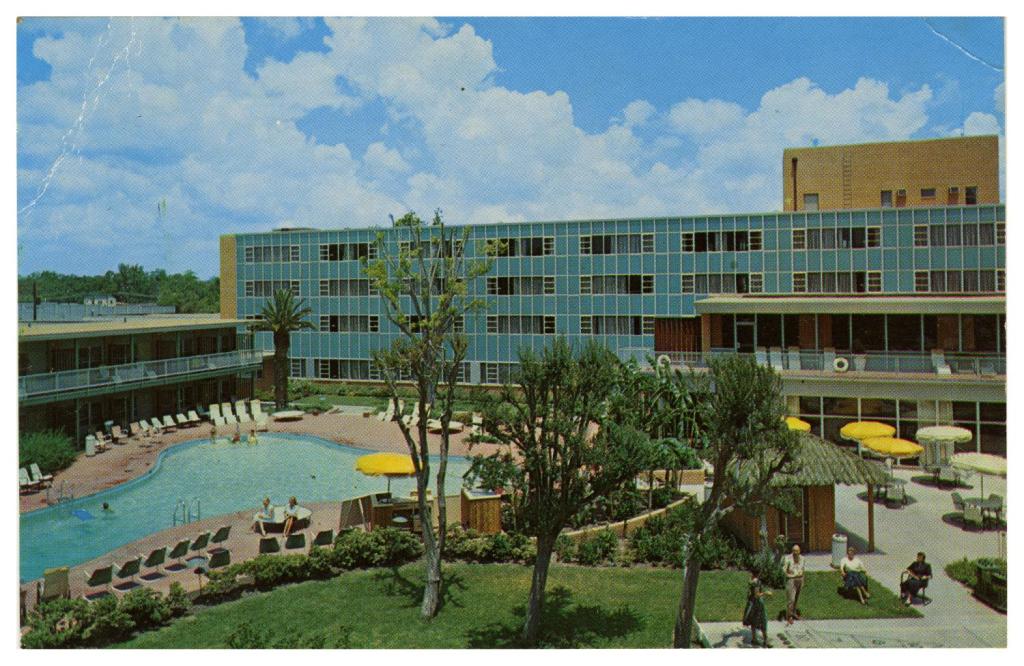 From the headwaters of the Sabine River north of Longview to the Gulf of Mexico, Orange has the history of once being the most prosperous town on the river. Orange produced millionaires in the era when timber was king, Orange produced ships of all types from wooden sailing vessels to warships and even Staten Island Ferries, and Orange produced many petrochemical products. Sadly those times were “boom times” and Orange has slipped into a shadow of what it once was.

During those prosperous times Orange had possessed something worthy of any city in the nation. Orange had been the home of two opulent hotels. First was the Holland Hotel that had been the envy of larger cities. The Holland was touted as one of the finest hotels in the South. After the Holland’s glory days ended another hotel appeared in Orange, it was the Jack Tar Orange House.

The first Jack Tar had been built as a tourist court in Galveston, Texas in 1940. It was built by W.L. Moody, Jr., owner of National Affiliated Hotels, and his son W.L. Moody III. After a few years of partnership, the younger Moody bought out his father. He wanted to build a regional chain of hotels and compete with his father. The first facility he built was a tourist court in Hot Springs, Arkansas. He later rebuilt the Galveston tourist court into a hotel. At the peak there were 14 hotels bearing the Jack Tar name.

“Jack Tar” or “Tar” was a slang term for sailors in the British navy. The rigging of the ships was coated with tar for waterproofing, canvas was tarred for the same reason, some sailors coated various types of clothing with tar to waterproof them, and it is even written that tar was used on some sailors hair to keep it from blowing when they were aloft in the rigging. There is a theory that the bib on a sailor’s blouse was put there to keep tarred hair from soiling the blouse.

Some of the Jack Tar hotels had a sign that depicted a large sailing vessel and there were often nautical themes in some of the hotels restaurants and rooms.

In 1954, discussion began about building a new hotel in Orange. By mid 1955 community leaders began to work on fundraising to buy property and to find a hotel chain that would work with them on the project. The selected site would be across Division Street from the Holland Hotel. On the property was the Thompson home, one of Orange’s finest old homes on the river.

After all the financial details were worked out and the Thompson home was demolished, work began on the Jack Tar Orange House. The hotel would be one of the newest resort designs.

There would be the main building that would have the guest rooms, ballroom, a private club, shops, barber shop, and a restaurant that would become noted for its prime rib. The slogan of the hotel would be, “Prepare to be Pampered.” Behind the main building would be a terraced area with shaded tables, a unique kidney shaped swimming pool and cabana rooms surrounding the terrace and pool area.

Taking advantage of the river, there was a floating dock with facilities to fuel and tie up boats for guests wanting to arrive by boat.

The jewel in the crown of Orange opened in the summer of 1957, complete with searchlights on a trailer in front of the hotel. The lights swung back and forth. Anyone in sight of them may not have known exactly what was happening, but it had to be something special.

Eventually the old Holland Hotel was torn down and the site used for a parking lot for the Orange House.

Over the years many social club events, dances, banquets, wedding receptions, and parties were held at the hotel. The restaurant became one of the finest eating establishments in the area. There was also the Sugar and Spice coffee shop off of the lobby that was a popular eating spot for those who worked and shopped downtown. The Yacht Club upstairs was a private club with dinner and dancing.

The famous Aqua Demons and Debs waterskiing team used the hotel as their headquarters and for years held an annual summer water show on the river next to the hotel. On the front of the hotel there was a bar, a barber shop, beauty shop, and a women’s clothing store. Inside in the lobby was a Western Union full service office.

The world and the economy changed and after a time, downtown hotels lost their popularity, and the Orange House became less and less profitable. The new Interstate 10 bypassed Orange and less traffic came through town. Eventually the annual water show on the river faded away. There was not as much to attract visitors to downtown where the hotel was.

The Jack Tar chain was sold to the Allegro hotel chain in 1997. The Orange House eventually closed and sat vacant. There was an attempt to convert the hotel into a retirement community, but that failed also and in 2006 the hotel became vacant.

The hotel deteriorated; storms blew out windows and caused leaks in the roof. Vandals did some damage. The cabana rooms air conditioners were stolen. The once opulent hotel became an eyesore.

Plans were made to build Riverfront Park and utilize the hotel property so in 2011 the hotel was demolished and construction began on the park.

Now there is a stage with an amphitheater, a large grassy area where people can attend concerts.  This is a few yards away from where the Yacht Club once was located and tuxedoed bands played for people to dance on a hardwood floor. Food vending trailers have taken the place of prime rib on china plates.

One thing that has not changed is that people still go to that site on the river and have a good time.