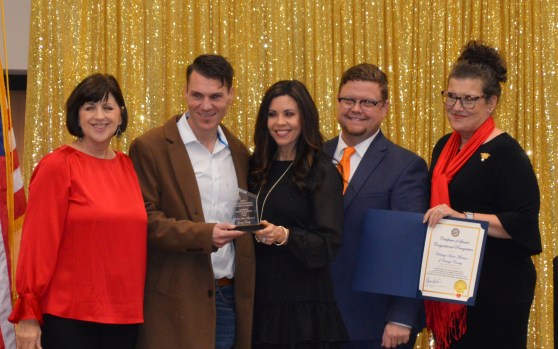 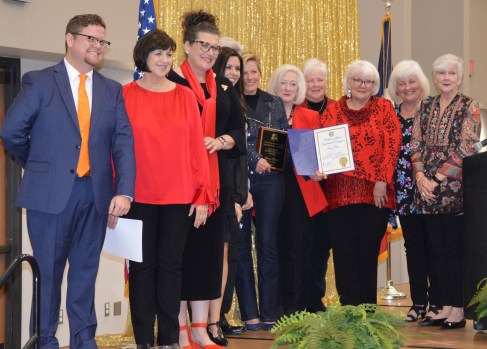 Dawn Burleigh/Orange Leader Reverend “Uncle” Larry David was honored with the Lifetime Achievement Award which was accepted by members of his family during the Monday night banquet held by the chamber.

Dawn Burleigh/Orange Leader Paul and Kim Dickerson, owners, of The Orange Stationer were honored with Business Community Service Award at the chamber Banquet on Monday. 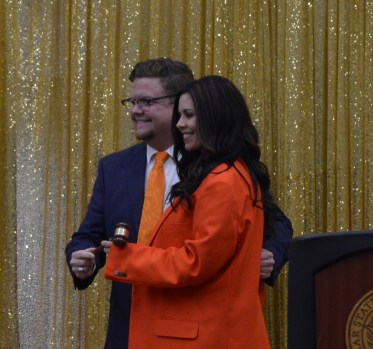 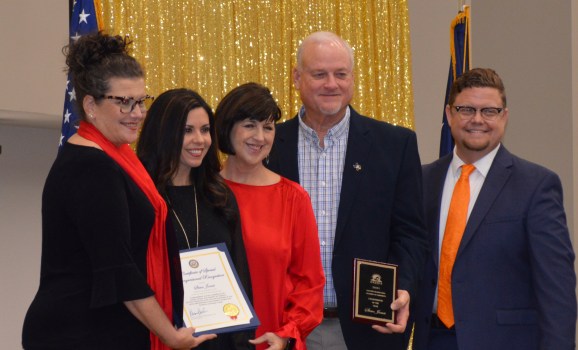 Dawn Burleigh/Orange Leader Board Chairperson of the Year is presented to “Uncle” Steve Jones for all he has done to help the chamber and the community.

It was a full house at the Greater Orange Area Chamber of Commerce annual banquet on Monday night at the Shahan Events Center at Lamar State College Orange.

It was an event which was postponed in 2020 due to COVID and a scaled down version was held in early 2021. However, Monday night’s event showed people were ready to move forward.

Outgoing Chairman Chris Kovatch spoke of the accomplishments of the chamber despite the challenges due to the global pandemic.

“We have delivered over 180 oranges and are winding down on the business ones,” Kovatch said. He also asked for recognition for Brad Childs who was part of delivering every single one.

“’We are starting with the residential oranges now.”

Recently the chamber was able to resume Student of the Month and Business of the Month. The chamber also held the first Tim Schossow Golf Tournament. The annual chamber golf tournament was renamed this year to honor all Schossow has done for the chamber and the community. He passed in November 2020 at the age of 67. He served on several boards including, the Greater Orange Area Chamber of Commerce, Orange County Appraisal District, Orange Gun Club, Ducks Unlimited, and the American Red Cross where he served for 17 years. He also was a past board member of United Way and a member of the Orange Lions Club.

2021 also saw the return of the Gumbo Cook-off which was held as part of the City of Orange’s first Orangetoberfest.

Kovatch also spoke on the impact of the Bassmaster tournament on the community.

“The Orange tournament is the one all others are compared to,” Kovatch said. “This year we again had the highest attendance.”

Kovatch also added the membership dues to the chamber are an investment in the community.

He then passed the gavel to Incoming 2022 Chairman Kristen Placette.

“What a year,” Placette said.

She added how she received the call concerning making the Bassmaster Tournament happen in six weeks. Which the chamber accomplished and as, Kovatch mentioned, had a record attendance of over 40,000.

Placette’s theme for the coming year is “Feels Like Home”.

“I want to encourage you to select someone on your team to mentor, encourage them to volunteer. Invite them to your club, to church,” Placette said. “Encourage them to plug into the community so Orange County feels like home to them.”

President of The Heritage House Museum of Orange County Adam Conrad accepted an award for Non-Profit of the Year as the museum was named for the honor.

The museum found ways to continue moving forward despite not being open due to storm damage from Hurricane Harvey followed by the pandemic. In December 2020, a drive through visit to Santa was held with students from the Vidor Theater group performing as toys coming to life to the delight of children in all of us.

It also held an inaugural Storm Expo this year focusing on educating the community in preparing for hurricane season.

Heritage House Museum of Orange County, located at 905 W. Division St. in Orange, was originally the Jimmy Ochiltree Sims home. Roy Wingate, co-chairman of the Bicentennial Commission, asked city officials to donate the house for use as a permanent museum after learning the home was to be demolished.

The structure was moved from its original location at 809 Front Street and restored to its earlier appearance.  The exterior of the home is painted gray with maroon trim just as it was in 1919.  When major modification was made the long leaf pine woodwork and original lighting fixtures inside were restored, and reproduction period wallpaper and curtains cover the walls and windows of the original two-story six room structure. The house is listed as a Recorded Historic Texas Landmark by the Texas Historical Commission.  The rooms reflect the lifestyles of the upper middle-class family in the early twentieth century in Orange, Texas, according to its official website.

Heritage House, through the support of citizens, civic groups and others within the county, continues towards restoration of historic artifacts of Orange’s past.

The museum represents a community working together to preserve the history of the area.

Lifetime Achievement Award was given to a man known as Uncle Larry David. Butch Campbell explained the term Uncle showed we are all family.

“He showed selfless service,” Butch Campbell said. “Selfless service is defined as the lack of the pursuit of one’s own interests for the betterment of others.”

Reverend David was also known by many as “The Hamburger Man” at the Lions Club Carnival, David was involved in the community in many aspects over the years. In 2016, over 7,300 burgers were made at the event.

David served as director of the YMCA, in the Knights of Columbus, with the United Way as the chair and Commercial Division Chairman. He was a past director for the Red Cross and chairman. He also served as Stark Foundation board member and chairman.

Another passion for David, a 1963 graduate of St. Mary’s High School, over the years has been his Catholic faith. David has a BBA for technology from Lamar State College and went on to receive a diploma in Pastoral Theology from St. Thomas University.

He was a deacon at St. Anthony Cathedral Basilica in Beaumont.

He served as Chamber of Commerce director in the late 1970s and has been an ambassador since 1971. He was the Gumbo Cookoff chairman from 1979-80. He has taken part in the Orange Community Action Committee. He’s also thrived with the Lions Club and has been a past president and that’s to just name some of his involvement in the community.

David, a past president of the Heritage House Museum, stayed “jolly” for 40 years, playing Santa Claus during the Christmas holidays.

A member of his family said, “We are deeply touched for recognizing his love for this community.”

“Thank you for sharing ‘Uncle’ Larry with us,” Butch Campbell said.

Citizen of the Year was given to Charlotte Alford who currently works at The Heritage House but also was a driving force for the Campfire program in Orange County giving up summer after summer for the troops to attend summer camp.

“She was the face of scouting for 27 years,” Campbell said. “She encouraged others to be the best of themselves.”

Business of the Year was awarded to The Orange Stationer. Throughout the pandemic, the owners Kim and Paul Dickerson, found ways to help businesses stay open an operate during trying times when many were not sure what was coming next.

“Thank you from both our hearts,” Kim Dickerson said. “We love this community so much.”

Board Chairman of the Year was presented to a man who prefers to avoid the limelight, ‘Uncle” Steve Jones.

“I don’t do it for this,” Jones said referring to the award. “You call, I will come. I enjoy everything that we do.”