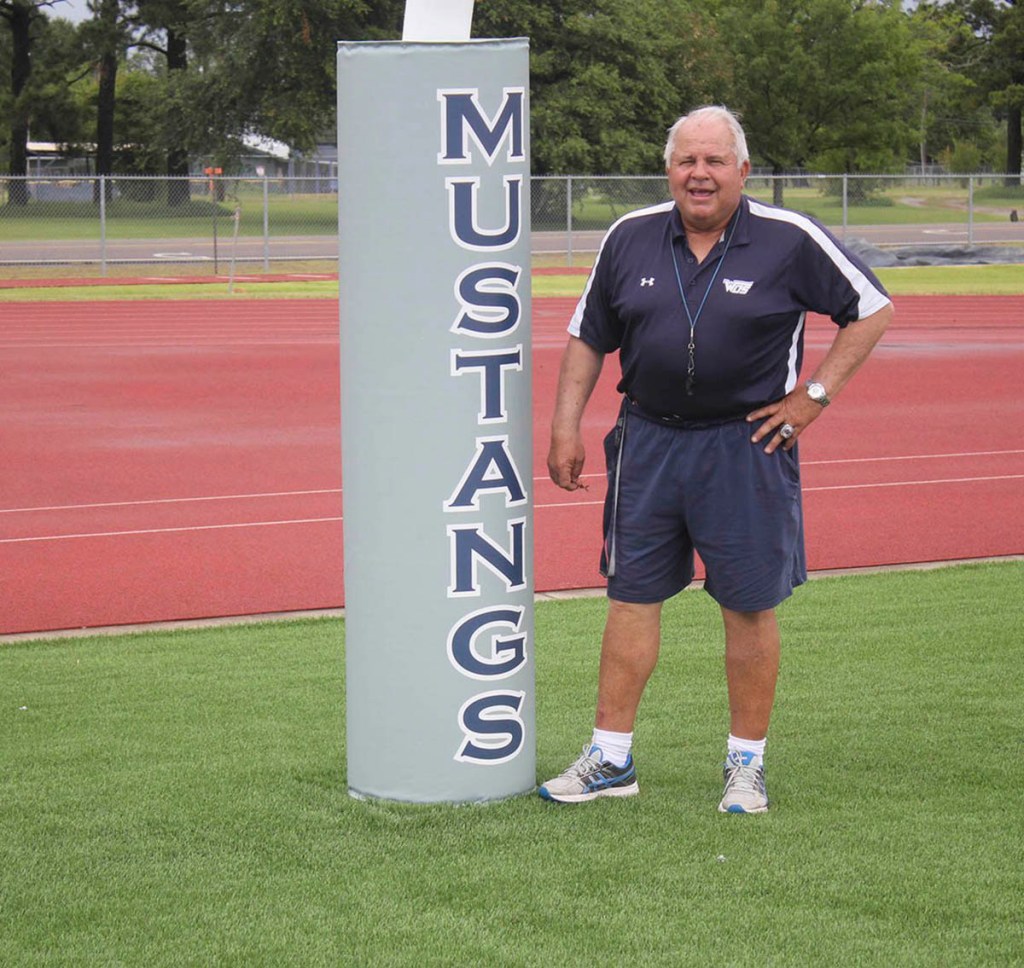 WEST ORANGE – In West Orange-Stark lore, he will always simply be known as “Coach T.”

Now the man simply wants to be Frances Thompson’s main squeeze all of the time and be “Paw Paw T” to his grandchildren.

After 51 years in the coaching profession, West Orange-Stark Athletic Director and head football coach Cornel Thompson turned in his resignation to the district Monday.

Other than a couple years in Kirbyville, one in Palestine and two in Huntsville, Thompson spent the other 46 years turning kids into men at WO-S.

He spent 35 of those years as a top-notch linebacker coach and Defensive Coordinator before he took over the head post in 2011. He also spent time, with nice success, as both the head baseball coach at Stark High and at WO-S.

“It’s time to put up the whistle, but like I’ve always said, ‘Once a Mustang, always a Mustang’”, said Thompson. “But it’s time for me to move on and enjoy the rest of my life. Frances and I have been married 33 years and I’m so ready to be with her all of the time now. She has been a trooper and a warrior and has been right there by my side. She’s my prettiest assistant, she’s watched so much film over the years and I’ve drug her to so many clinics all over the country. It’s time for me to devote my entire energy to her and my family.”

Thompson has enjoyed the family support system he has had over the years.

“For so many years my kids sacrificed because of all the hours I put into coaching but they have always been there supporting me all the way,” said Thompson. “I was fortunate to coach my two sons Marcus and Michael and my stepson Chad and I have a tremendous stepdaughter in Nikki. Sometimes I wish I could have gone back in time, I would have spent so much more time with them than what I did. Now, I get a golden opportunity to do just that. I’m really looking forward to spoiling my grandkids and be one happy Paw-Paw.”

Thompson basically knew he was getting out of the game when the season started when he had to miss the Nederland game due to a health scare.

“It’s been a tough couple years, with the COVID situation and then I got sick after taking one of the vaccines and that really scared me a lot,” said Thompson. “That made me reflect on a lot of things. I was grateful that I got through that and now I just want to spend all of my time on this Earth with my wonderful family.”

One thing for certain, there will be many opposing teams and players that will be glad to see that ‘Paw-Paw’ head off to his mini-ranch in Orangefield to raise his Longhorns.

The Mustangs advanced to the 4A Region III Finals 10 out of Thompson’s 11 years at the helm.

“Let’s just say I have been blessed to have been able to coach some of the finest kids and some of the best coaching staffs ever assembled,” said Thompson. “Like I have said before, ‘You can’t win the Kentucky Derby with a mule.’ We’ve had some tremendous talent walk through this fieldhouse. Most of them bought into the system we started here with Coach (Steve) McCarthy and Dan Ray (Hooks). The kids bought into our offseason, bought in on how we practice. We always made a point to them that nobody else was going to outwork the Mustangs.”

Coach Thompson was proud to be able to have coached former Mustangs that played in the National Football League that includes the likes of Kevin Smith, Earl Thomas, Deionte Thompson, Chris Cole, Greg Hill and Ernest Anderson.

Thompson is going to miss those days in the fieldhouse and on the field with assistants that will always be in his life.

“The friendships I have gained over the years, and I’ve been so fortunate to work with so many wonderful coaches over the past 51 years, is something I will cherish forever,” said Thompson. “All of those guys will always feel like family and I love all of them. I’m so going to miss Thereze (Sichko), nobody works harder as an Athletic Secretary than her, she’s a ‘rock’ around here. There will be plenty of smiles, hugs and plenty of tears around here for the next few weeks, but they are going to be happy ones.”

Thompson turned in his resignation Monday at the WOCCISD Office and the District has posted the Athletic Director/Head Football Coach job on their website already.

Thompson wants to be a part of the hiring process as well and said he would do what ever he could to help the next man up.

“There will be a lot of applicants for the job, I’m sure of it,” said Thompson. “I told Superintendent (Rickie) Harris that I would be a part of the process for sure. From what I understand, they want to get a 12 to 15-person panel to get together and pick the best candidates as far as the applicants and search goes.”

Under Thompson’s guidance, the Mustangs went a perfect 53-0 in district play, which is mind-boggling. In those 53 wins, they outscored the opposition 2,161 (40.8 points a game) to 392 (7.4 points a game). The Mustangs accumulated 18 shutouts and held district opponents to seven points or less in 15 other games.

“Wow, I really didn’t realize those numbers,” said Thompson. “That’s a credit to a great bunch of kids and a great coaching staff. I don’t deserve all that credit, it’s a tribute to the kids’ and the coaching staffs’ work ethic and commitment to the program.”

The Mustangs also notched a phenomenal 41-9 playoff record for a .820 winning percentage during Thompson’s reign. Imagine, that’s and extra five more regular seasons (50 games) that the Mustangs played in the last 11 years, in the playoffs alone. In those 50 games, the Mustangs outscored their playoff opponents 1,874 (37.5 points a game) to 655 (13.1 points a game). He saw 19 Mustangs nab All-State accolades since 2011.

“No question, we’ve had a great run since the two schools merged back in 1977 and the people, coaches, teachers and kids I’ve been fortunate enough to be able to come across will always have a special place in my heart,” said Thompson. “I would love to thank so many people right now but that list would just go on forever. Coaching is not a job that’s as easy as most people think. I’ve been blessed to have done it for 51 years, not many people can say that, what a great ride it was for sure.”