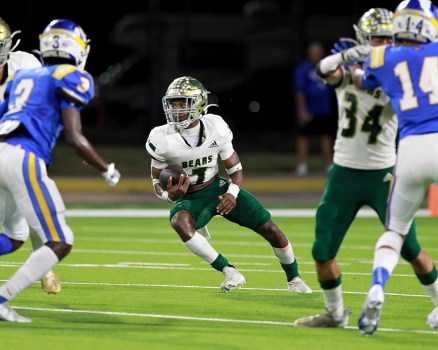 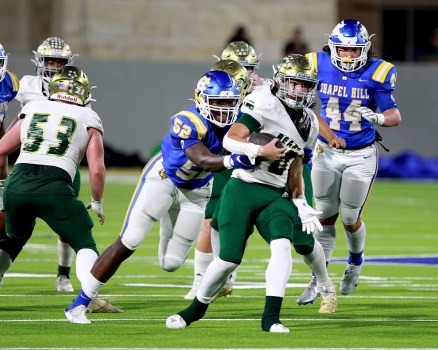 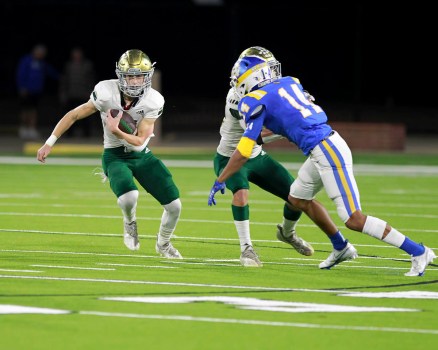 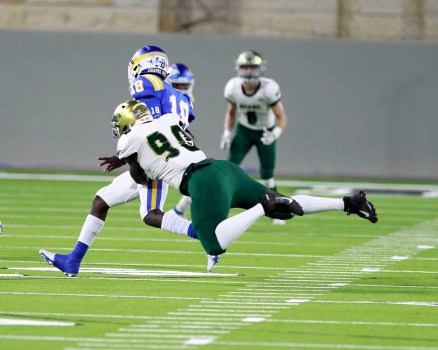 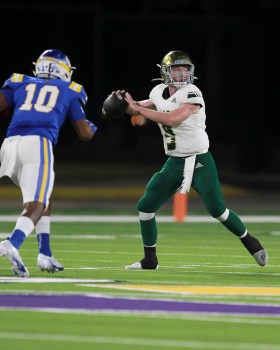 CYPRESS -Little Cypress-Mauriceville’s amazing season came to an end Friday night as they fell to the Tyler Chapel Hill Bulldogs 31-14 at Cy Fair’s Berry Stadium in the Class 4A Region III Division I Finals.

It was a tough night for the Bears (11-3) and their offense as they looked out-of-character against the Bulldogs (11-3). LC-M’s usual starting quarterback Ashton Landry was playing through an ankle injury he sustained last week – he took a limited number of snaps under center against their regional opponent.

The Bears kept battling though and fought to the end as they wrapped up a tremendous campaign under the direction of first-year head coach Eric Peevey. It marked the first time since 1997 since the Bears advanced to the Regional Finals. The improvement from last year’s 1-7 season to 11-3 was simply amazing and this Bear team really set the tone for what looks like a promising future for the LC-M program.

LC-M received the game’s opening kickoff but were met with a strong opening statement by the Bulldogs defense. Following a punt, Chapel Hill started their first drive from their own 20. Quarterback Demetrius Brisbon rushed five times for 59 yards before throwing a three-yard touchdown pass to Ilonzo McGregor in the back of the end zone. The Bulldogs jumped out to an early 7-0 lead.

Chapel Hill’s defense forced another quick three-and-out by the Bears on the next drive. The Bulldogs needed just six plays to find the end zone, driving downfield before Brisbon ran through the line for a one-yard touchdown rush. Chapel Hill’s lead increased to 14-0 as the first quarter ended.

The Bears finally moved the chains to open the second quarter. The Bears operated from the wildcat formation as running back Da’Marrion Morris lined up under center. He and quarterback Dean Reynolds alternated carries on the 56-yard drive, but the Bears came up empty handed after turning the ball over on downs.

While the LC-M defense stopped the Bulldogs in their tracks after the turnover, the Bears didn’t have possession for long. Reynolds lost a fumble which Samari Willis recovered and returned 58 yards for a Chapel Hill touchdown. Following the scoop-and-score, the Bulldogs held a commanding 21-0 lead.

LC-M did have a chance to score before the half was over – Reynolds completed a 38-yard pass to Keaton Rives, bringing the Bears inside their opponent’s 10. Morris rushed twice, nearly breaking into the end zone both times. He was ruled down just inches shy of the goal line, leaving LCM with a 21-point deficit to climb back from after halftime.

Just two quarters from elimination, Little Cypress-Mauriceville looked like a different team in the second half. Their defense forced a fumble to open the third quarter, and Dwight Davis recovered for the Bears. Their offense fought tooth-and-nail to move the ball, and a 21-yard sideline rush from Carson Peet brought them deep into the Bulldogs’ territory. Reynolds then tossed a pass to Morris, who weaved his way to the end zone and put the Bears on the board with an 18-yard touchdown reception.

The Bears’ defense held the Bulldogs in check on the next drive, forcing them to settle for a field goal on fourth down. Chapel Hill’s kicker, Adolfo Tamayo, shanked the attempt and it sailed right of the uprights, leaving the scoreboard 21-7.

Reynolds and Davis then led LCM on a long 16-play, 80-yard drive downfield. Morris capped it off with a one-yard touchdown rush, bringing the Bears within one score, 21-14.

With roughly seven minutes left to play, the Bears chose to attempt an onside kick. If the ball hadn’t taken an unfortunate bounce out of bounds, LCM could have found themselves in position to tie the game.

Instead, they faced a determined Bulldogs offense. The defense gave everything they had and forced a fourth-and-one, but Brisbon managed to slip past several LCM defenders for a 33-yard touchdown run. Chapel Hill pushed their lead to 28-14 with five minutes left.

LC-M made one last effort to mount a comeback. Reynolds threw a 19-yard pass to Rives but was then sacked twice in the backfield. Facing fourth-and-17, the Bears took a final shot downfield to no avail, turning the ball over on downs.

Taking over after the turnover, The Bulldogs ran time off the clock before kicking a field goal with one minute left, putting the finishing touch on their 31-14 victory.