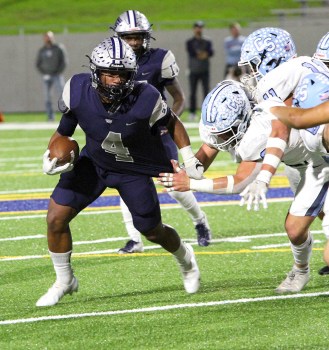 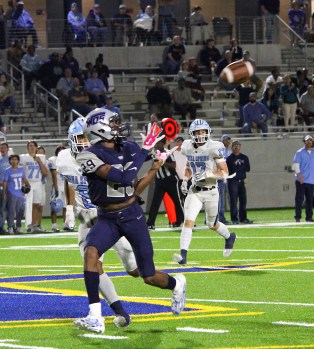 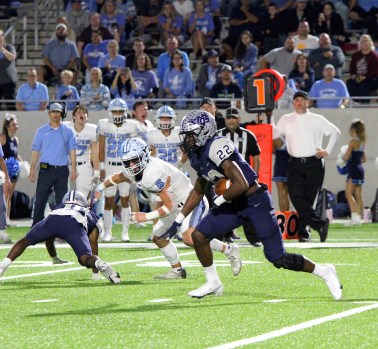 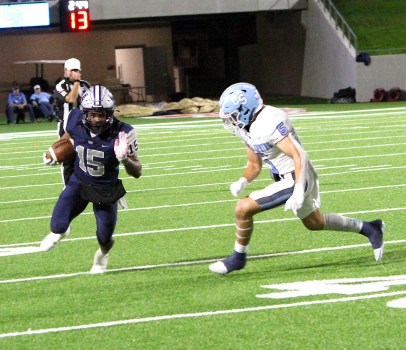 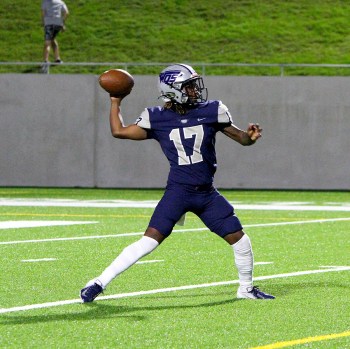 The Cougars (14-0) continue to roll on after beating top-ranked Carthage last week and the No. 4-ranked Mustangs Friday.

Bowden shredded the Mustang defense for 272 yards rushing and three touchdowns on 27 carries. The Cougars rolled up 456 yards of total offense. China Spring running back Kyle Barton contributed to the attack with 102 yards on 19 carries and hauled in a 44-yard pass that set up a touchdown. Bowden completed 3-of-5 passes for 62 yards.

The Mustangs (11-2) suffered a major blow with a little over a minute remaining in the first quarter when all-time leading rusher Elijah Gales suffered a severe arm injury. Gales had 39 yards on eight carries before he got hurt and scored the Mustangs’ first touchdown.

It was still a tremendous season for the Mustangs as they reached the Regional Finals for the 10th time in 11 years for long-time head coach Cornel Thompson.

The Mustangs forced the Cougars into three turnovers in the first half but still found themselves down 10-7 at intermission.

The Cougars gained 200 total yards in the first half, 197 of it coming via the ground attack. Bowden had 131 yards on 14 carries in the half while Barton had 48 yards on 11 totes.

The Cougars moved from their own 41 to the Mustang 21 on their first series of the night, but the Mustangs responded when they belted Kyle Barton, forcing a fumble as WO-S defensive back Dontrey McClain pounced on the loose ball at the Mustang 26.

Gales ripped off a 19-yard run on fourth-and-1 from the Mustang 48 that got down to the Cougar 33.

Two plays later, Robinson connected with receiver Nicholas Crosson down the left sideline for a beautiful 30-yard strike down to the Cougar 3. On the next play, Gales bolted off left tackle for a three-yard touchdown. Cristian Quiteno Polio booted the extra-point, giving WO-S a 7-0 edge with 3:55 left in the first quarter.

Barton coughed it up on a pitch at the Cougar 41 as Mustang defensive lineman Andrew Wilson pounced on the loose leather to snag China Spring’s second turnover with 2:48 in the first quarter.

The China Spring defense rose up and held the Mustangs to a three-and-out.

The Mustangs snagged their third turnover in the half when Jamaal Shaw picked off a Bowden pass at the Mustang 31 and returned it all the way back to the Cougar 37 but the WO-S offense failed to capitalize as the Cougars got on the scoreboard on their next series.

Bowden tried a run off left tackle, got bottled up on the play, but became an escape artist as he twisted his way out of the pile with a nice spin move and scooted 72 yards down the left sideline for a touchdown. Kicker Thomas Barr booted the extra-point, tying it up at 7-7 with 8:35 left in the half.

Quiteno Polio, also a great punter for the Mustangs as well, pinned the Cougars all the way back to their own 4 after a 59-yard punt with 7:09 in the half.

The Cougars, however, answered with a 16-play, 77-yard drive that led to points and it also enabled them to run out the rest of the clock. Fifteen of the plays came on the ground with Bowden and Barton.

Bowden had nine carries for 39 yards and Barton had six totes for 38 on the series. The Mustang defense held firm late and Barr managed to put the Cougars up 10-7 with a 36-yard field goal as time expired in the half.

The Cougars zipped 90 yards in four plays late in the third quarter to snag a 17-7 lead. The big play came when Bowden saw an opening up the middle and sprinted 71 yards for a touchdown as the Cougars led 17-7 with 1:37 in the third.

The Mustangs countered quickly though when Robinson threw a perfect strike over the middle to receiver Darren Anderson for a 70-yard touchdown bomb, trimming it to 17-14 with 0:46 in the third.

China Spring, however, had an answer on the next series.

Bowden found Barton wide open on the right side that went for a 44-yard completion to the Mustang 2. Two plays later fullback Dawson Exline barreled his way off left tackle for a one-yard touchdown, pushing the Cougar lead back to 10 at 24-14 with 10:38 remaining.

Bowden wasn’t through getting loose as he led a five-play, 71-yard scoring drive by capping it off with a 44-yard keeper for a touchdown off the right side, making it 31-14 with 5:40 left.