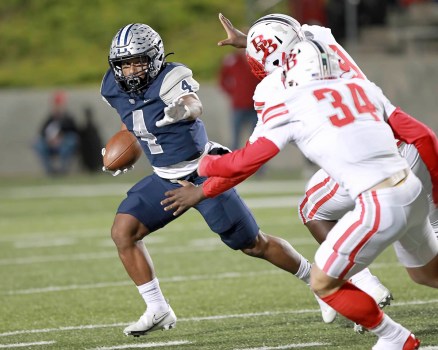 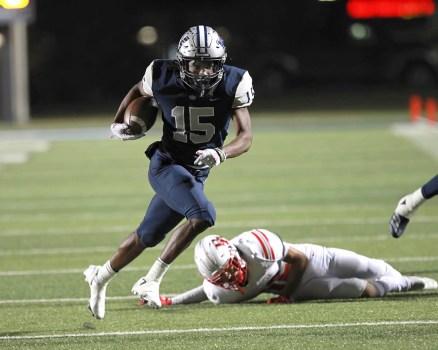 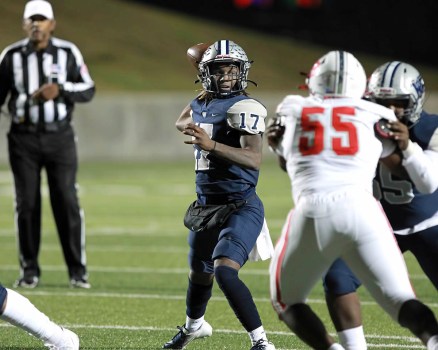 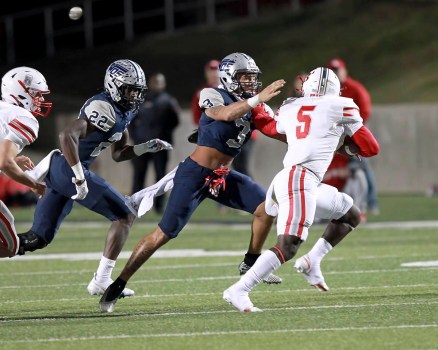 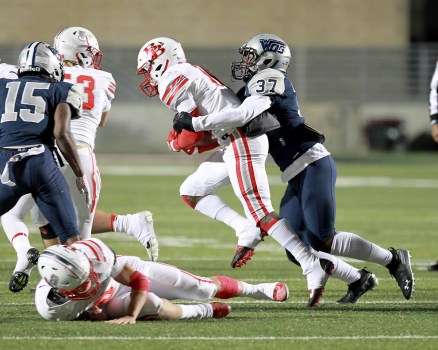 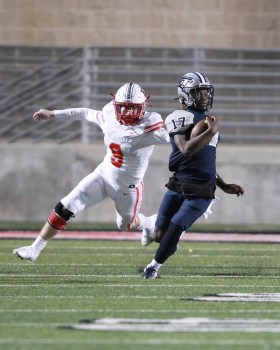 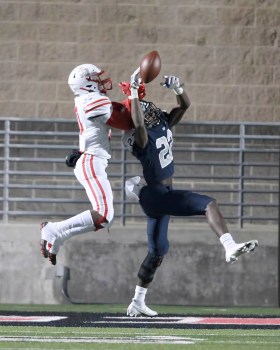 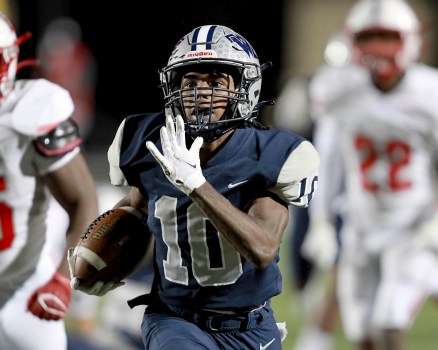 NEW CANEY – There is no doubt about it, the West Orange-Stark Mustangs remain to be kryptonite for the Bellville Brahmas.

For the fourth straight time, the Mustangs handled the Brahmas in the Class 4A Region III Division II playoffs as WO-S rolled to a 36-17 Regional Semifinal win at Randall Reed Stadium Friday night.

The Mustangs (11-1) held the previously undefeated Brahmas (12-1) to 51 total yards in the second half and outscored them 17-0 after intermission to pull away for the victory.

The marks the 10th time in 11 years that the Mustangs have advanced to at least the 4A Region III Division II Finals under the guidance of long-time head coach Cornel Thompson.

The Mustangs will move on the face the China Spring Cougars in the Regional Finals. China Spring (13-0) ended top-ranked Carthage’s 41-game winning streak with a 27-17 victory over the Bulldogs Friday night.

The Mustangs will be looking for a little revenge after it was China Springs that knocked them out of the playoffs last season 35-22 in the area round.

The Brahmas came in averaging 51 points a game but the Mustangs slowed down their vaunted rushing attack, holding them to 249 total yards.

Bellville finished with just 106 yards on 34 rushes. Bellville quarterback Reid McCann did complete a few long passes, mostly in the first half, as he finished 5-of-13 for 143 yards and was picked off twice. The Mustangs limited standout Bellville back Richard Reese to 85 yards on 24 tough carries. He had over 2,100 yards entering the game. Bellville’s 1,400-yard back Robert Briggs was limited to 16 yards on six carries.

It was the Mustangs that had their running game churning, led by senior standout tailback Elijah Gales. Gales gutted the Brahmas for 191 yards on 22 carries. Fellow back Jailen Brown had a solid overall game, finishing with 60 yards on eight totes and caught three critical passes for 32 yards. Mustang quarterback Elijah Robinson was solid as well, making big plays with his legs and arms when it counted the most. He completed 6-of-10 passes for 73 yards. The Mustangs finished with 360 total yards.

WO-S has now outscored Bellville 151-45 in their four playoff meetings.

It was an action-packed first half with the Mustangs going into intermission with a 19-17 edge.

After both teams exchanged fumbles Bellville took its second possession and marched 61 yards on 13 plays with Reese carrying nine times for 60 yards. The Brahmas got all the way down to the Mustang 4 but the Mustang defense held firm and Bellville settled for a 21-yard field goal by Fernando Grajales to go up 3-0 with 3:11 in the first quarter.

The Mustangs countered quickly, getting good field position at the Bellville 48 on the next series. Gales ripped off a 13-yard dart to the 35 and then he capped it by taking a sweep around the right side and darted 35 yards for the score. Gales had 101 yards on 10 carries in the half. Cristian Quiteno Polio booted the extra-point as the Mustangs snared a 7-3 edge with 2:32 left in the first quarter.

WO-S had some clutch plays on their next march as they ate up 69 yards on 13 plays to hit paydirt again, chewing 5:43 off the clock.

Dakarion Judge made a great catch along the left sideline off a throw by Robinson on third-and-11 from to Mustang 30, that set up shop at the 45 for a 15-yard gain.

Robinson had a nice 12-yard scoot to the Bellville 33 and he connected with Jailen Brown on a 11-yard pass to the 11.

The Mustangs got to the 1 but Robinson was sacked for an 11-yard loss back at the 12. However, Robinson bounced right back, connecting with Brown on another 11-yard toss to get to the 1 again. On fourth-and-goal from the 1, Robinson scored off right tackle, giving the Mustangs a 13-3 edge with 7:09 in the half as the extra-point got blocked.

Bellville, however, answered right back in dramatic fashion when McCann hooked up with back Briggs on a deep route. Briggs found an opening in the Mustang coverage, hauled it in and scored on a 67-yard bomb, trimming it to 13-10 with 5:30 in the half.

The Mustangs had a prompt answer though as they marched 51 yards in just four plays on their next possession. Gales broke loose on a 21-yard dart to the Bellville 30 and scored again three plays later when he bolted through the heart of the Brahmas’ defense for a 20-yard touchdown jaunt right up the middle. The Mustangs missed the extra-point but led 19-10 with 4:00 in the half.

Bellville wasn’t going away as they had another big pass play to set up a score right before the half.

McCann found receiver Blake Linseisen open along the left side for a 43-yard connection that went all the way to the Mustang 15. Reese, capped off the eight-play, 68-yard drive five plays later when he scored from three yards out off right tackle, cutting the Mustang lead to 19-17 with 0:23 in the half.

The Brahmas outgained the Mustangs 198-148 in the half.

Robinson completed 3-of-4 passes for 37 yards in the half for the Mustangs.

The Mustangs navigated 83 yards on nine plays on their first series of the second half. Robinson had a run of 12 and Gales went for 16 to get to the Mustang 40. On the next play,  Judge took an end-around 35 yards around the left side to the Bellville 25.

On third-and-12 from the 27, Robinson connected with Brown on a 10-yard pass to the 17, making it fourth-and-2. The Mustangs went for it and Gales got just enough, getting three yards to the 14.

Two plays later Brown cruised around the left side for an eight-yard touchdown gallop, Quiteno Polio nailed the extra-point, giving the Mustangs a 26-17 edge with 6:30 left in the third.

The Mustangs put three more on the board after a seven-play, 44-yard drive. The Mustangs got a big 33-yard run by Gales on the series. The Mustangs got all the way down to the Bellville 2, but a bad snap on third down pushed the Mustangs back to the 11 and WO-S settled for a 28-yard field goal by Quiteno Polio with 1:09 in the third, making it 29-17.

The Mustang defense got in on the scoring act when defensive lineman Andrew Wilson picked off a McCann pass and barreled his way into the end zone for a 14-yard interception return for a touchdown, pushing the lead to 36-17 with 5 minutes left.