Battlin’ Bears end the ‘flight’ of the Ricebirds, 24-21, move on to Regional Finals 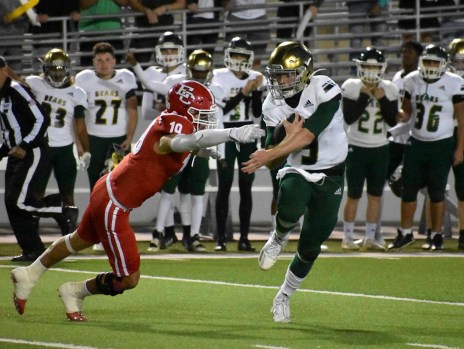 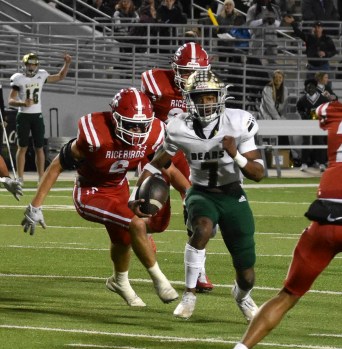 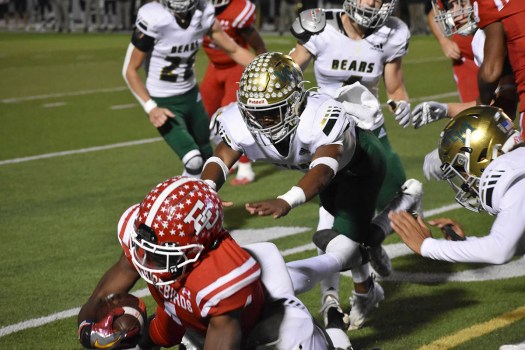 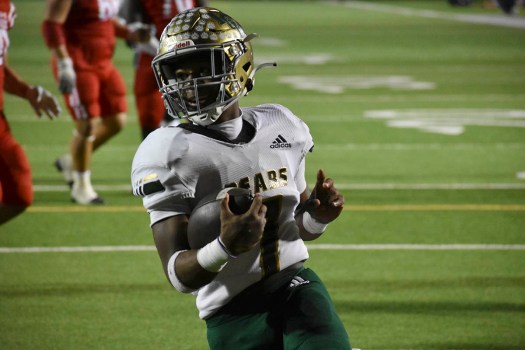 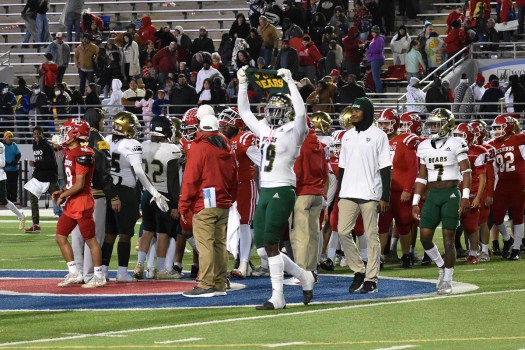 CONROE – For the first time since 1997 the Little Cypress-Mauriceville Battlin’ Bears find themselves in the Regional Finals after they stunned the El Campo Ricebirds 24-21 in the Class 4A Region III Division I Regional Semifinals at Woodforest Bank Stadium Friday night.

LC-M (11-2) entered Friday’s contest as underdogs, facing an 11-1 Ricebirds squad at a neutral site in Shenandoah. While the Ricebirds averaged over 56 points a game this season, LC-M’s defense held up strong and was the key to keeping their playoff hopes alive while the Ricebirds finish up 11-2.

LC-M received over 300 yards rushing from running back De’Marion Morris and quarterback Ashton Landry. Morris zipped for 185 yards on 17 carries and Landry cruised through the El Campo defense for 131 more on 19 totes as the LC-M offensive front wall continues to open up tremendous running lanes throughout the postseason.

Standout junior Ricebird running back Rueben Owens, who had nearly 2,800 yards rushing coming in, was solid, finishing with 176 yards and three touchdowns on 26 carries. Good numbers, but he had over 300 yards rushing in each of the Ricebirds first two playoff games, so the Bear defense did a pretty good job not letting him run rampant.

The Bears’ tenacity on defense was evident on the game’s first sequence, forcing a turnover on downs at the LC-M 40. After just three plays, quarterback Ashton Landry broke free for a 45-yard rushing touchdown to put Little Cypress-Mauriceville on the board, 7-0. Landry shredded the Ricebird defense for 131 yards on 19 carries.

While El Campo’s offense sputtered out on their first drive, they did find the end zone on their second possession. The Ricebirds’ talented running back duo powered their way downfield before Rueben Owens punched in a one-yard touchdown rush to tie the game at 7-7.

Both teams traded punts to end the first quarter, but LC-M started building momentum with 6:29 left in the second quarter. The Bears took over with great field position from their 45. The offense grinded out some small chunk gains before Landry scrambled for a 29-yard touchdown – his second of the night. Little Cypress-Mauriceville held a 14-7 lead at halftime.

The second half opened with a failed drive by the Bears offense that resulted in a punt. However, the LC-M defense flexed their muscles again and forced a Ricebirds three-and-out.

Taking possession from their own 26, Landry helped engineer one of the game’s most crucial drives. He completed an eight-yard pass to Gianni Huffman, then found a wide-open Dean Reynolds for a 33-yard completion. Landry then rushed five times for 30 yards, setting up a 26-yard field goal attempt. Justin Rainey booted it through the uprights, extending the Bears’ lead to 17-7.

Trailing by two scores entering the fourth quarter, El Campo finally showed flashes of the elite rushing attack that had propelled them this far into the playoffs. Owens rushed four times for 53 yards and a touchdown to keep the Ricebirds within striking distance. The scoreboard read 17-14, LC-M, with just under eight minutes to go.

Things took a bleak turn for the Bears when Landry took a shot to the leg and limped off the field. Dean Reynolds took over at quarterback.

Despite the QB change, Little Cypress-Mauriceville kept the chains moving. De’Marion Morris hauled in a 30-yard pass before rushing for 23 yards on the next play. Morris capped off the drive with a 13-yard rushing touchdown, extending the LCM lead 24-14.

With time running out in the fourth, the Ricebirds punched back with a nine-yard scoring drive. Owens found the end zone on a three-yard rushing touchdown to bring El Campo within three points, 24-21.

Just under three minutes remained on the clock as the teams prepared for the next kickoff. With their season on the line, El Campo attempted an onside kick which rolled out of bounds, giving LC-M control of the ball. Facing a third-and-seven, Morris barreled up the middle for 36 yards and effectively iced the game.

Reynolds took a knee in the backfield to seal LCM’s 24-21 victory.