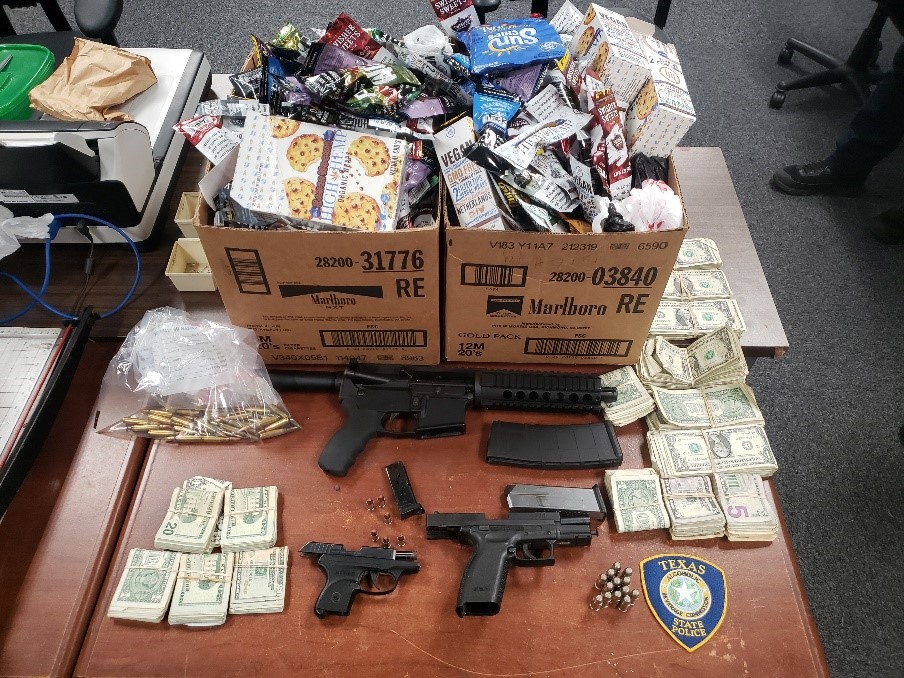 Agents from the Texas Alcoholic Beverage seized marijuana, weapons and cash during an inspection at a Spring liquor store Nov. 17. The inspection resulted in the arrest of a Harris County man on charges of possession of marijuana and unlawful possession of a firearm. TABC photo

HARRIS COUNTY — An inspection of a liquor store by the Texas Alcoholic Beverage Commission has resulted in the felony arrest of a Harris County man along with the seizure of several pounds of marijuana and firearms.

TABC agents made the arrest while inspecting D&K Spring Liquor at 23311 Aldine Westfield Road in Spring on Nov. 17. Arrested was 37-year-old Damian Shimfarr, who was charged with unlawful possession of a firearm and possession of marijuana. Shimfarr was taken to the Harris County Jail and later released after posting bond.

The drugs and firearms were discovered by TABC agents along with approximately $6,000 in cash. Among the firearms were two handguns and an AR-15-style rifle.

“Drugs, guns and cash fuel organized crime, and TABC will not tolerate crime at businesses we regulate,” TABC Executive Director Bentley Nettles said. “We will follow this arrest with a full investigation to hold accountable anyone who’s using a licensed business as a hub for illegal activity.”

TABC is continuing the investigation and will explore possible administrative action against the business.

Anyone with information about illegal activity within a TABC-licensed business can file a report on the TABC website, by emailing complaints@tabc.texas.gov or by calling 888-THE-TABC.