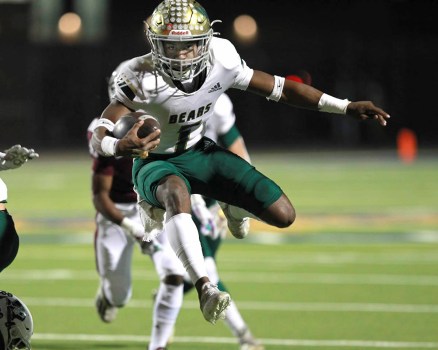 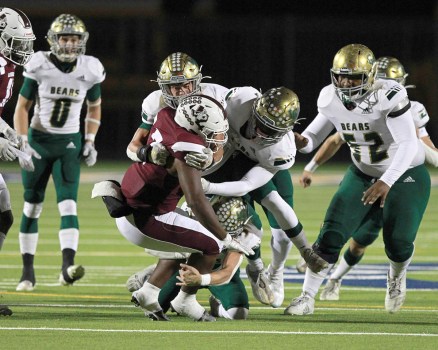 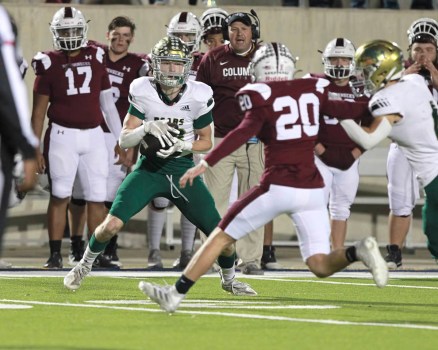 CHANNELVIEW – The Little Cypress-Mauriceville Battlin’ Bears dominated in the second round of the Class 4A Region III Division I playoffs, beating the West Columbia Roughnecks 42-21 in the area round at Channelview’s Maddry Stadium.

It was another huge win for the Bears (10-2) and first-year head coach Eric Peevey. The big win marked the first time since 1997 since the Battlin’ Bear program has notched 10 victories in a season.

The Bears will move on to face the El Campo Ricebirds (11-1) in the regional semifinals next week. The two will battle next Friday at 7 p.m. at Woodforest Bank Stadium in Conroe. El Campo knocked off 2020 state finalist Lindale 56-42 in the area round Thursday night.

The Roughnecks (6-5) simply had no answer for the Bear rushing attack. Getting some nice holes provided by the offensive front, Bear standout running back De’Marion Morris zipped his way through the West Columbia defense for 221 yards and three touchdowns on 24 carries while quarterback Ashton Landry reached the 100-yard mark and three touchdowns on 15 totes.

Columbia jumped out to an early lead on the first play from scrimmage. Jordan Woodard took a handoff and rumbled 71 yards to the house, putting the Roughnecks ahead 7-0 just 17 seconds into the game. It would be their only lead of the game.

LC-M took over from their own 44. After nine plays, Morris bounced a run to the outside and found the end zone for a 24-yard touchdown. LCM tied it up 7-7 with 8:38 in the first quarter.

LC-M’s defense recovered from their early mistake, forcing a quick three-and-out. The Bears’ rushing attack then moved the ball at will, driving 93 yards downfield before Morris punched in a one-yard attempt for a touchdown. LCM moved ahead 14-7 to begin the second quarter.

Shortly after, the Roughnecks would find themselves inside the LCM 25. The offense ran a flea flicker, resulting in a 22-yard pass from Woodard to Kade Reynolds. Woodard then rushed for a one-yard touchdown on the next play, tying the game at 14-14.

The Bears’ offense stayed hot on the next possession. Landry scored on a two-yard rush, giving Little Cypress-Mauriceville a 21-14 lead with four minutes to go until halftime.

The Columbia offense sputtered out again, punting the ball away. LCM then extended their lead when Morris broke loose for a 32-yard house call. Heading into halftime, the Bears held a commanding 28-14 lead.

The Bears got whatever they wanted on offense for most of the night. At the half, Morris already had 126 yards plus three scores on 16 carries. Landry had 60 yards and a touchdown of his own on 10 rushing attempts at halftime.

Little Cypress-Mauriceville received the ball to open the second half. The Bears continued to carve up the opponent’s defense, and LCM went up 35-14 after Landry reached the end zone on a six-yard QB keeper.

After stopping the opposing offense several possessions in a row, the LCM defense looked great. The unit’s strong night continued when Morris picked off a pass near the end of the third quarter.

The Bears scored their sixth touchdown of the night at the start of the fourth quarter. Landry scrambled 18 yards for his third TD, effectively sealing the game for the Bears. With the game practically finished, the Bears subbed out several starters to keep them healthy for next week’s game.

The final points of the night came too little, too late for the Roughnecks. With one minute left in the game, Jabari Mack turned on the jets for a 56-yard touchdown rush. But of course, it wasn’t near enough to make any difference.

The Bears looked practically unstoppable, finishing with over 450 yards of total offense.