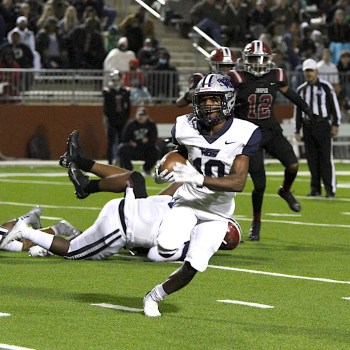 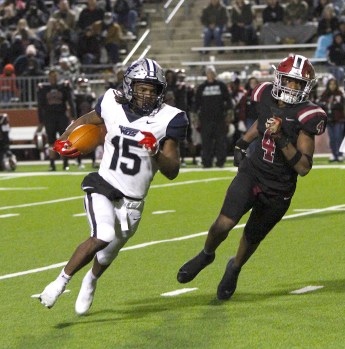 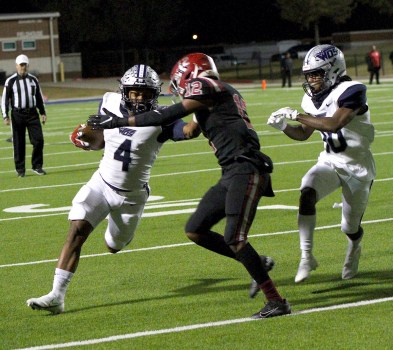 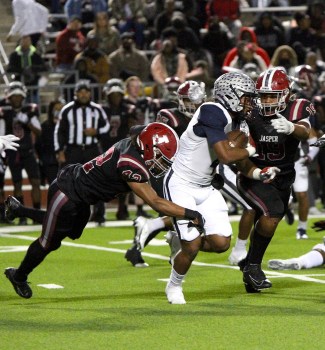 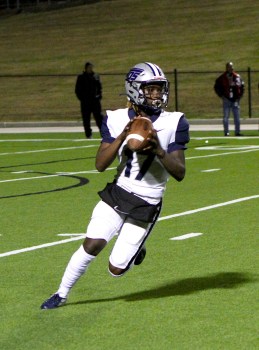 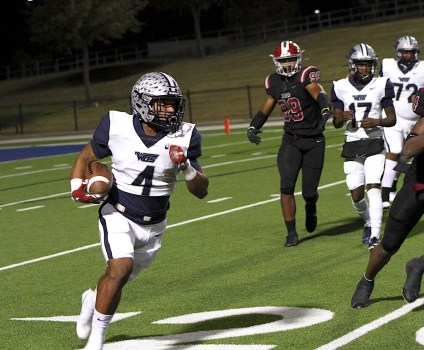 BEAUMONT – It was a typical good old-fashioned slobber-knocker between the West Orange-Stark Mustangs and the Jasper Bulldogs Friday night but it was the Bulldogs that took the most punishment.

The Mustangs put together enough offense to score 13 points in the third quarter as they walked away with a 20-7 Class 4A Region III Division II area round playoff win at Beaumont ISD Memorial Stadium.

The Mustangs (10-1) limited the Bulldogs (6-5) to just 143 yards of total offense and Jasper got their only score on a 61-yard touchdown pass in the first quarter. The Bulldogs just had 39 total yards in the second half.

The Mustangs finished with 260 total yards, 164 coming in the second half.

The Mustangs will now move on to the 4A Region III Division II regional semifinals when they will take on Bellville. Bellville (12-0) defeated Rusk 41-20 Friday night.

Mustang running back Elijah Gales ran for 83 yards on 24 tough carries. Dakarion Judge had 45 yards on two carries, including a 33-yard touchdown gallop on an end-around. He also had a big interception. Mustang quarterback Keyshawn Robinson completed 4-of-11 passes for 79 yards.

Jasper quarterback Zikeice Simmons completed 5-of-14 passes for 98 yards. Receiver Jermario Thomas hauled in three receptions for 76 yards and a touchdown. The Mustang defene, led by another superb performance by Carmello Jones, limited the Bulldog ground game to just 26 yards on 25 carries.

It was a defensive slugfest in the first half as the teams went in at intermission tied at 7-7.

Neither team got it going on the offensive side in the first 24 minutes as Jasper had 104 total yards and the Mustangs had 97.

The Bulldogs zipped 87 yards in seven plays to hit paydirt on their first series of the night.

On third-and-9 from their own 14, Simmons tossed a lateral to receiver Jermario Thomas, who completed a wide receiver option pass to Kenyan Vidito for 19 yards and a first down to the 33.

Four plays later on 2-and-14 from the 39, Simmons teamed up with Thomas on a 61-yard touchdown strike down the left side as Thomas outjumped a Mustang defender and sprinted to the end zone. Kicker Ayden Garcia booted the extra-point to give the Bulldogs a 7-0 edge with 6:50 left in the first quarter.

The Mustangs managed to move from their own 36 to the Jasper 18 early in the second quarter with the big play being a perfectly executed 29-yard screen pass from Robinson to Jailen Brown that got to the Bulldog 24. The Mustangs got to the 18 but got called for a false start, making it fourth-and-9 from the 23. Robinson was then picked off by Thomas at the Mustang 5 with 11:24 in the half.

After holding the Bulldogs to a quick three-and-out, the Mustangs chewed up some clock to get on the board as they manufactured 40 yards in 11 plays to tie things up.

Gales hauled in another perfectly called screen pass that went 15 yards to the Bulldog 21. The most important play call was on fourth-and-11 from the 22 when receiver Dakarion Judge took an end-around 12 yards around the left end to get a first down at the 10. Gales and Robinson combined for nine yards on three carries and Gales, running out of the Wildcat formation, scored on a hard-earned one-yard touchdown blast off left tackle. Cristian Quiteno Polio nailed the extra-point to tie it up at 7-7 with 4:18 in the half.

Gales had 31 yards on 15 carries and had two catches for 15 yards in the half for the Mustangs. Robinson completed 3-of-9 passes for 44 yards.

Simmons was 3-for-7 for 77 yards for the Bulldogs with Thomas hauling in two receptions for 67 yards. Jasper’s run game netted just eight yards on 13 carries in the half with Simmons leading the way with six yards on seven totes.

Thomas brought the second half kickoff back 50 yards to the Mustang 45 but the Mustangs ended up stuffing Simmons on a fourth-and-1 keeper from the WO-S 36.

The Mustangs had another big defensive stop when Judge picked off a wide receiver option pass from Thomas at the WO-S 31 and he returned it to the 50.

Gales had a nice 12-yard dart to the Bulldog 38 and another five-yard dart to the 33 and then Judge turned on the afterburners on a 33-yard end around from his receiver spot around the left side as no Bulldog was going to catch him as he sprinted 33 yards for the score, giving the Mustangs a 14-7 edge with 6:25 in the third.

After holding the Bulldogs to another three-and-out the Mustangs took over at the 50 and found the end zone again in just five plays. On second-and-10 from the Bulldog 40, Robinson teamed up with receiver Jadon Jones on a sparkling 35-yard dart along the left side to the Jasper 5. On the next play, Robinson capped it off with a five-yard keeper up the middle. The extra-point kick was no good as the Mustangs led 20-7 with 2:41 in the third.

The Bulldogs drove to the Mustang 19 early in the fourth quarter but the Mustangs forced an incomplete pass on fourth down with 10:53 left.