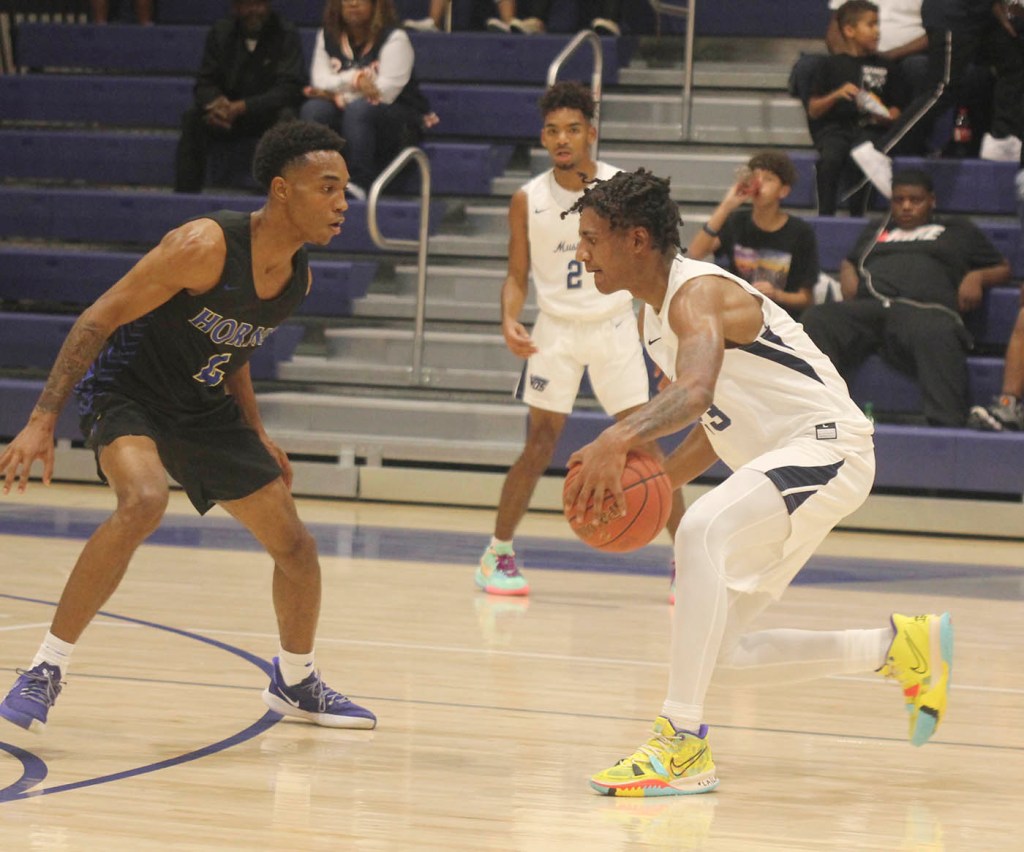 WEST ORANGE – It was a whirlwind of a game for the West Orange-Stark Mustangs as they almost pulled off an amazing comeback against the Hamshire-Fannett Longhorns Tuesday night at Mustang Gym in their season opener, but they fell just short 73-71.

The Mustangs (0-1) dug themselves an early 19-4 hole against the Longhorns (0-1) and trailed 43-25 at the half before making a furious comeback attempt in the last 16 minutes and almost pulled one off for first-year head coach Chris Castille, who was proud of the Mustangs as they never gave up against a very talented Hamshire-Fannett squad.

Trailing 70-62, the Mustangs received back-to-back three-point bombs from Trinton Garrett to trim it to 70-68 with just under a minute left. Jailan Ardoin sank two free-throws for the Horns to eventually make it 72-69. Mustang guard Adrian Crochett cut it to 72-71 with a layup with 3.65 seconds remaining. The Longhorns got a free-throw from Ardoin after he missed the first attempt to grab the 73-71 edge. Garrett got off a desperation three-point attempt for the Mustangs just over the half-court line as time expired, it was lined right, it just fell short.

Ardoin had a huge outing for the Longhorns, finishing with a game-high 32 points. Garrett had 12 points for WO-S as he canned four three-pointers on the night.

The Mustangs were slow out of the gate as Ardoin and Coleman combined for 14 points for the Longhorns and WO-S committed eight of its turnovers in the quarter.

The Longhorns outscored WO-S 24-21 in the second quarter as both teams were hot.

The Mustangs starting chipping away in the third period, outscoring H-F 18-13 to pull to within 56-43 heading to the fourth. Pappillion flexed his skills inside with seven points in the period while Ardoin had eight for the Longhorns.

WO-S had the Longhorns in panic mode in the fourth, creating havoc with their full-court pressure and forcing H_F into eight turnovers in the quarter. Pappillion and Holifield also did some damage inside in the quarter, combining for 13 points. That set up Garrett’s back-to-back three-pointers late when the Mustangs made the one final push that just came up a bit short.

The Mustangs will look to bounce back Saturday when they host Shepherd.