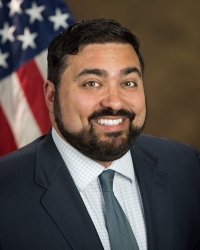 “The opportunity to serve the American people as Acting United States Attorney was both an awesome responsibility and a tremendous privilege,” said Mr. Ganjei.  “I was incredibly fortunate to have such a skilled team of prosecutors and staff by my side, and I could not have asked for more dedicated and professional law enforcement partners.  I am tremendously proud of the work we have done and all that we have accomplished.  Together, we made a real difference in the lives of the people of East Texas.”

During his tenure, Mr. Ganjei prioritized the prosecution of large-scale drug trafficking organizations, particularly international drug cartels, and oversaw one of the most prolific extradition practices in the nation.  Mr. Ganjei’s team successfully extradited, convicted, and obtained a life sentence against a high-ranking member of the Los Zetas cartel who participated in the massacre of an entire Mexican village in 2011; obtained a life sentence against a Guatemalan drug lord who supplied cocaine to cartels and guerilla fighters in Central and South America; and successfully prosecuted an international soccer star for his coordination of bulk drug shipments between Colombia and the United States.

Mr. Ganjei also prioritized the investigation and prosecution of complex frauds and white collar crime and increased the office’s staffing and resources devoted to such cases.  Under Mr. Ganjei’s leadership, the Eastern District of Texas obtained a 408-month sentence in a multi-million dollar fraud and money laundering scheme that victimized senior citizens and charities; obtained convictions against multiple individuals in connection with a kickback conspiracy related to genetic testing; obtained a sentence of 84 months for a doctor engaged in health care fraud; successfully prosecuted an engineer who fraudulently sought $13 million in Paycheck Protection Program (PPP) loans; secured a 97-month sentence against a defendant who defrauded an elderly East Texas victim of $4.8 million; successfully prosecuted a wedding planner for fraudulently obtaining more than $3.3 million in PPP loans, and investigated and indicted two defendants for the alleged fraudulent filing of hundreds of Economic Injury Disaster Loan (EIDL) applications.

Mr. Ganjei’s team also obtained bribery convictions against a former Richardson, Texas mayor and her land developer husband; disrupted and prosecuted an enormous international black market operation alleged to have trafficked over $100 million in stolen merchandise; convicted a Texas lawyer who swindled his Colombian drug trafficking clients by claiming he had successfully bribed judges and prosecutors; disrupted and prosecuted an alleged multi-scheme fraud conspiracy charged with stealing $17 million through romance scams and business email compromise; successfully prosecuted a Honduran national who solicited the murder-for-hire of family members; obtained a 30-year sentence against a North Texas pastor for the sexual exploitation of children; and obtained RICO convictions against numerous members of a violent white supremacist prison gang.

Prior to serving as Acting United States Attorney, Mr. Ganjei was a career prosecutor who handled all manner of federal crimes, having joined the Department of Justice in 2008.  Most recently, Mr. Ganjei investigated and prosecuted fraud, public corruption, and other complex white collar matters.  Mr. Ganjei also prosecuted organized crime, narcotics, and human trafficking cases.  Before joining the Department, Mr. Ganjei clerked for the Honorable Richard Allen Griffin of the Sixth Circuit Court of Appeals and the Honorable Ralph R. Erickson of the Eighth Circuit Court of Appeals (previously of the United States District Court for the District of North Dakota).  Mr. Ganjei has additionally taught on the subjects of civil, criminal, and constitutional law, at both the collegiate and law school level.

Leadership responsibilities will be handed off to Brit Featherston, who presently serves as the district’s Executive Assistant United States Attorney.