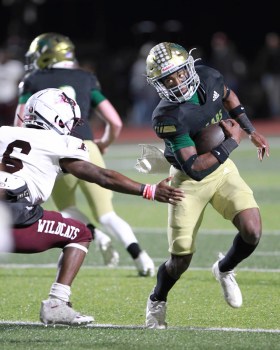 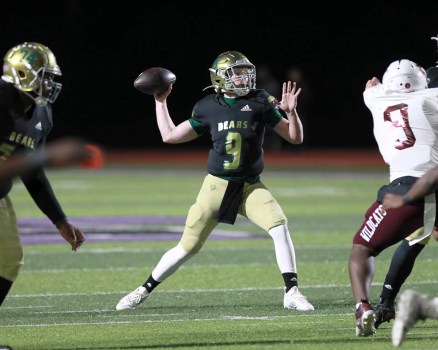 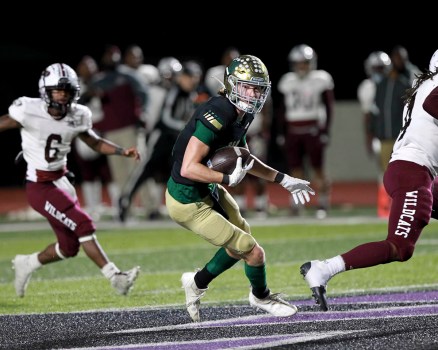 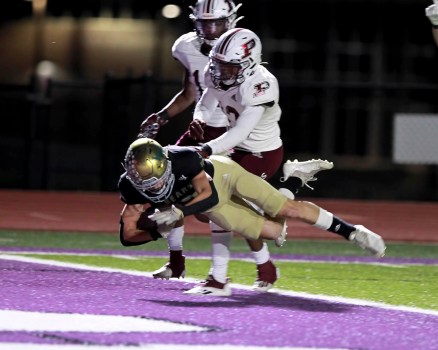 WILLIS – Piling up over 500 yards of total offense, the Little Cypress-Mauriceville Battlin’ Bears rallied to beat the Palestine Wildcats 34-24 in the Class 4A Region III Division I bidistrict playoffs at Willis High School Friday night.

Down 17-12 at the half, the Bears (9-2) outscored the Wildcats (5-6) 22-7 in the second half and dominated Palestine in the fourth quarter to pull away to give first-year head coach Eric Peevey’s his first playoff win in leading the LC-M charges.

Bear quarterback Ashton Landry and tailback Da’Marion Morris had big outings for the Bears as they racked up 530 total yards. The Bear offensive line played a huge role in dominating the wall up front.

Palestine finished with 343 total yards, most of it coming in the first half.

The game was a close contest from start to finish. LCM won the coin toss and deferred, giving Palestine the ball for the opening possession. The Wildcats jumped out to an early lead after a flea flicker turned into a 54-yard touchdown, hauled in by D’Myzean Martin. Palestine took a 7-0 lead just a minute and a half into the first quarter.

LC-M’s offense – especially Morris – looked good on their first drive of the game, but were eventually stopped on a fourth-and-15 at the Palestine 20. The Wildcats then drove downfield, eventually settling for a 20-yard field goal, extending their lead to 10-0.

With 4:29 remaining in the first quarter, Landry hit Keaton Rives on a beautiful pass across the middle for 40 yards. The Bears then advanced into the red zone, but again faced a fourth down situation. Desperate to put points on the board, Landry took a shot into the end zone but it was batted down by a Palestine defender.

The Bears’ defense started to wake up as the second quarter began, forcing a three-and-out inside Palestine’s 20. A 55-yard punt gave LCM the ball back at their own 35. This time, the eight-play drive was successful as Landry put the Bears on the scoreboard with a five-yard touchdown rush. However, the PAT was blocked, and LCM still trailed 10-6.

Palestine immediately fired back when Jermny Walker broke loose for a 50-yard rush. Four players later, Jerrod Walker punched in a QB keeper at the goal line for another Wildcat touchdown. They pushed ahead 17-6 with three minutes until halftime.

LC-M took over from their own 25. The Bears opened with a trick play as Dean Reynolds threw a 20-yard pass to Morris. They would then rush three times before Dwight Davis rushed for a 23-yard score. A passing attempt on a 2-point conversion was swatted away but LCM pulled closer, trailing 17-12 heading into halftime.

The Bears received the ball after the half. Landry rushed for nearly 60 yards on the drive but coughed up a fumble inside the Palestine 5. The missed opportunity stung, but Morris would intercept a pass to give LC-M the ball back.

Landry made up for his previous mistake by calmly leading a masterful drive downfield. He scrambled for 24 yards, then connected with Dean Reynolds on a 17-yard pass. Landry would go on to score on a fourth down rush from the goal line, and Morris crossed the plane to convert the two-point attempt. The Bears took their first lead of the game, 20-17, with less than a minute to go in the third quarter.

The Wildcats wouldn’t go down without a fight though. Palestine caught a lucky break when a roughing the kicker flag went their way, bringing the ball into LC-M territory. TaJ’hawn Wilson ran for 17 yards and Walker found the end zone on a nine-yard touchdown rush. After the PAT, Palestine retook the lead, 24-20.

Trailing with eight minutes left in the game, LCM slowly worked their way into Wildcat territory with chunk rushing gains. With the game on the line, Landry hit Rives in stride for a 43-yard house call on a fourth-and-10 play that will go down as one of the best plays in LC-M’s football history. The Bears moved back ahead, 27-24.

Palestine got the ball with four minutes remaining. The LCM defense toughened up when it mattered most, forcing the Wildcats to go for it on fourth-and-12. LCM’s Cameron Judge landed a big hit on the quarterback in the backfield, forcing a crucial incompletion for a turnover-on-downs.

With 2:47 left on the clock, the Bears’ night wasn’t quite done. The offense took over from the Wildcats’ 40, and after just two plays Landry rumbled to the end zone for a 37-yard touchdown run. The PAT was booted through, extending the LCM lead to 34-24.

The Little Cypress-Mauriceville defense again came up clutch, holding their opponent to just 12 yards and a turnover-on-downs on the game’s final drive. The LCM offense came back out and knelt to run the clock down, sealing the playoff victory.

LC-M will face the winner of West Columbia and Houston North Forest in the next round of the 4A-DI playoffs. Those two teams play Saturday.