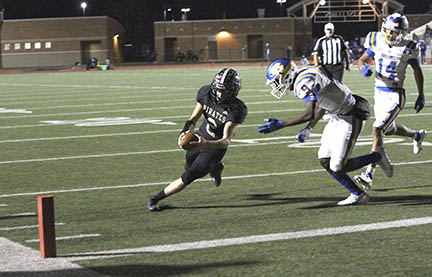 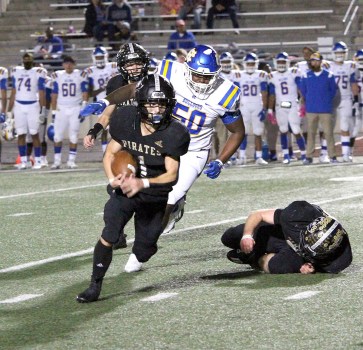 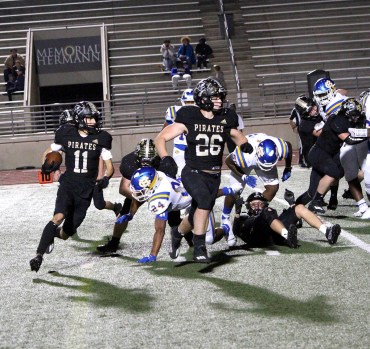 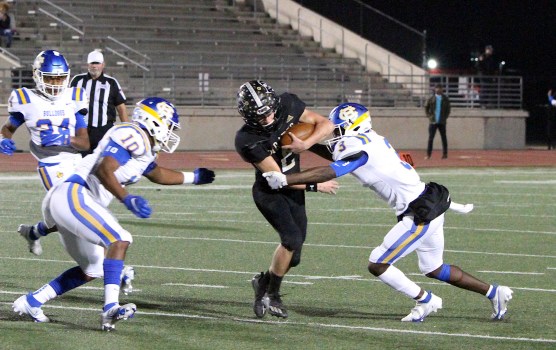 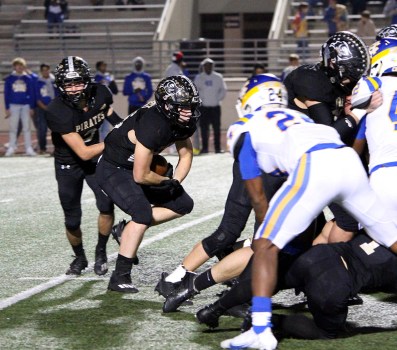 HUMBLE – They battled hard and made a nice run in the second half but the Vidor Pirates could not contain the legs of freshman Tyler Chapel Hill quarterback Demetrius Brisbon as they fell to the Bulldogs 25-20 in a Class 4A Region III Division I bidistrict playoff battle at Humble’s Turner Stadium Friday night.

Brisbon rushed for 247 yards and two touchdowns on 18 carries and passed for another as the Bulldogs (8-3) advanced to the area round.

The Pirates (8-2) were down 13-0 at the half but rallied back strongly in the final 24 minutes and had a chance at the end before the Bulldogs sealed it. The Pirates were missing long-time head coach Jeff Mathews, who missed the game due to coming up ill as they were making the trip up to Humble.

The Bulldogs finished with 358 total yards. They rushed for 319 yards on 36 carries. Brisbon completed just 2-of-8 passes for 39 yards.

The Pirates racked up 296 yards. They rushed for 243 yards on 60 carries. Quarterback Elisha Simmons completed 2-of-9 passes for 53 yards and rushed for 43 yards on 14 carries.

Pirate back Christopher Dilley zipped for 117 yards on 16 carries and caught a Simmons pass for 39 more. Layne Wilhelm had 43 yards on 14 carries while Ricky Gall had 29 yards on 10 carries.

Brisbon rushed for 153 yards and a touchdown and tossed a 25-yard touchdown pass as the Bulldogs took a 13-0 lead at the half.

The Bulldogs struck on their second series of the game, motoring 99 yards in five plays.

Brisbon capped it with a 68-yard touchdown gallop up the middle as he outsprinted the Pirate secondary to the end zone. The two-point conversion failed as the Bulldogs led 6-0 with 7:20 in the first quarter.

Chapel Hill struck again in the second quarter, zipping 61 yards on six plays to hit paydirt. Brisbon had a big 24-yard scamper on the series and he eventually found receiver Tyson Berry on a 25-yard touchdown strike over the middle of the end zone. Adolfo Tamayo booted the extra-point as the Bulldogs grabbed a 13-0 edge with 4:07 in the half.

Simmons led the Pirates in the first half with 37 yards on 10 carries. Dilley had 27 yards on four totes while Gall had 20 yards on seven carries.

The Pirates got on the board in the third quarter as they marched 59 yards in five plays. Dilley broke loose on a 33-yard dart around the left side to the Bulldog 26 and went seen more yards to the 19. Wilhelm carried twice for 15 yards and Simmons capped it with a four-yard keeper off right tackle. The Pirates missed the extra-point but pulled to within 13-6with 9:11 in the third.

The Bulldogs answered right back with a eight-play. 67-yard scoring drive. Brisbon carried four times for 28 yards. Berry went 26 yards on an end around from his receiver spot and back Samari Willis capped it with a 14-yard touchdown run down the left sideline. The Bulldogs missed the extra-point but went back up 19-6 with 3:57 in the third.

The Pirates got right back in it quickly after Bulldog Solomon Macfoy muffed a punt at the Chapel Hill 40 where the Pirates took over with 1:57 in the third.

The Pirates chewed up the 40 yards in nine plays. Dilley had a huge nine-yard run on the series on fourth-and-3 from the 11to the 2 and Simmons finished it off with a four-yard keeper off the right edge. The extra-point failed but the Pirates trimmed it to 19-12 with 9:10 remaining.

However, the Brisbon answered with his legs again for the Bulldogs on the next series when on third-and-13 from the Bulldog 30, he took off, fell some running room and zipped 70 yards down the left sideline for the touchdown. A bad snap forced the Bulldogs to fail on the point-after but they went up 25-12 with 7:41 remaining.

The Pirates retaliated with a huge 11-play, 68-yard scoring drive. Dilley went nine yards on fourth-and-3 to get to the Pirate 48. The huge play came when Simmons found a wide-open Dilley on the right side and the swift back sprinted all the way to the Bulldog 11 for a 39-yard gain. Three plays later Bryce Dubose took a pitch around the right side five yards for the touchdown. Simmons promptly ran in the two-point conversion, drawing the Pirates to within 25-20 with four minutes remaining.

The Pirates got the ball back at their own 40 with 2:03 left. Dilley had a nice gain of 6 that got to the Bulldog 40 and Chapel Hill was called for a personal foul to move it to the 25. The Bulldogs were able to hang on to the tight win when Samari Willis picked off a Simmons pass at the 11 with 1:06 left.