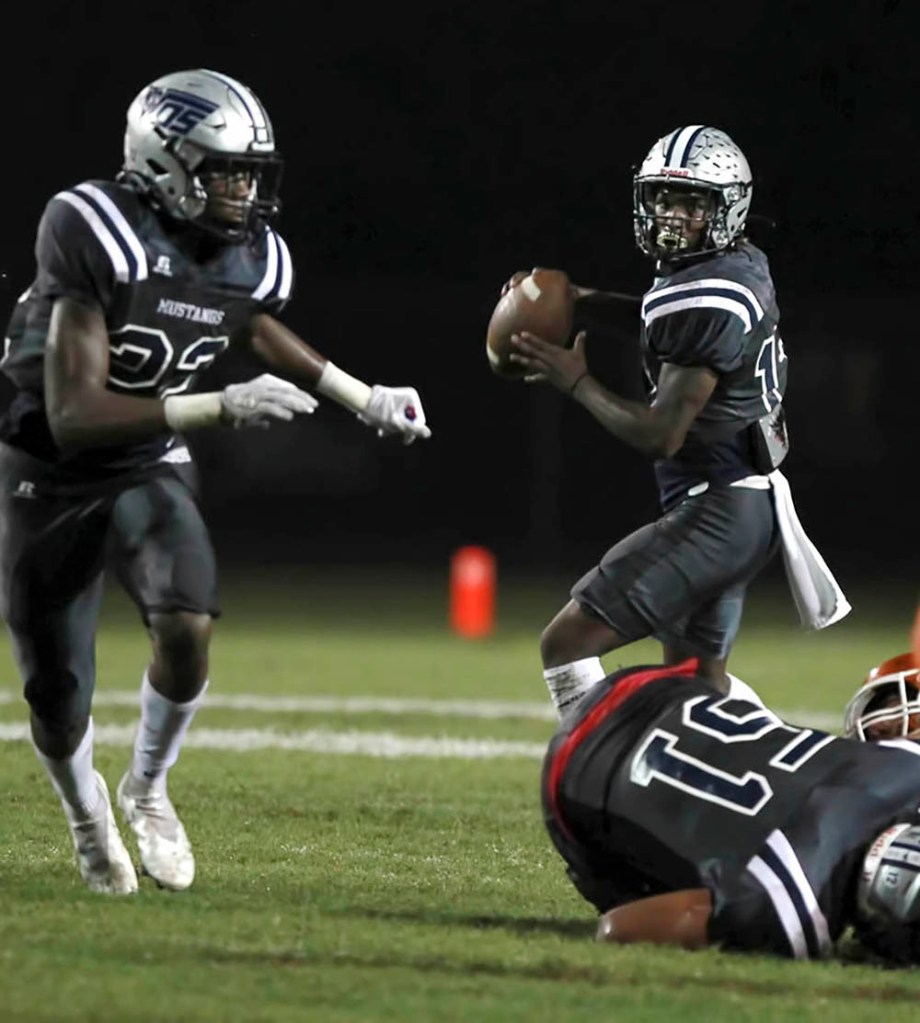 NEW CANEY – Living in LaMarque territory, especially in the first half, the West Orange-Stark Mustangs cruised to a 49-0 Class 4A Region III Division II bidistrict playoff victory over the Cougars at Randall Reed Stadium Thursday night.

WO-S (9-1) controlled the Cougars (5-5) in every phase of the game and zipped to a 35-0 cushion by halftime and the two teams eventually agreed to have a running clock nearly midway in the third quarter.

The Mustangs will move on to the area round where they will face old rival Jasper (6-4). Jasper held off Waco Connally (4-6) 23-20 Thursday night.

The District 11-4A Division II champion Mustangs held the woeful Cougars to 45 yards of total offense and three first downs as LaMarque had 25 yards rushing on 29 carries and had 20 yards passing.

The Mustangs totaled 250 yards and could have had way more if it wasn’t for the running clock as Coach Cornel Thompson played most of the roster in the rout.

LaMarque limped into the postseason as the fourth-place squad out of 12-4A. The Cougars were outscored 127-0 in their last three games as they lost their last two district contests to Bellville (35-0) and Sealy (43-0).

Cougar quarterback Armand Robinson was 3-for-9, passing for 20 yards and was held to three yards rushing on 12 carries. Dabrion Nelson led the Cougar rushing game with 15 yards on eight carries.

The Mustangs limited the Cougars to just 29 total yards and two first downs in the first half and gained 184 yards of their own with almost every drive starting in Cougar territory.

The Mustangs drove from their own 48 to the Cougar 35 but LaMarque forced a fumble by Robinson at the Cougar 35.

The Cougars, however, went backwards quickly. On fourth-and-11 from the 33 the Mustangs put on a heavy punt rush as the Cougars never got the punt off and the Mustangs tackled them for a three-yard loss.

It took the Mustangs just three plays to score from 30 yards away. Gales broke loose for a 20-yard scamper to the 10. After a procedure call pushed them back to the 15, Gales, who had 76 yards on eight totes in the half, broke off left tackle two plays later and bolted his way to a 15-yard touchdown gallop. Kicker Cristian Quiteno Polio booted the extra-point, making it 7-0 with 6:40 left in the first quarter.

After the defensive smothered the Cougars on another three-and-out, the Mustangs zipped 52 yards in just four plays to hit paydirt again.

The big play came when Gales took a pitch to Robinson and tossed a 35-yard halfback option pass to receiver Darren Anderson that got to the Cougar 5. Gales racked up his second touchdown of the night by zipping through the Cougar defense from five yards out, pushing it to 14-0 with 2:23 in the first quarter.

Shaw picked off a pass at the WO-S 49 with 6:53 left in the half but the Cougar defense stood firm, forcing a punt.

However, the next time he picked off a pass, Shaw made it count for six points. Shaw stepped in front of a Robinson pass at the Cougar 30 and zipped all the way to the end zone, making it 21-0 with 4:12 left in the half.

Utilizing a short field, the Mustangs found the end zone again, going just 31 yards in two plays. Swift receiver Dakarion Judge capped it when he hauled in a Robinson pass, made a nice move at the 4 and scored on a 24-yard touchdown strike, pushing it to 28-0 with 2:10 in the half.

The Mustangs tacked on some more after yet another three-and-out on defense as they took over at the Cougar 36 with 0:40 in the half. Gales broke loose for a 11-yard gain to the 25 and Judge and Robinson teamed up yet again when Robinson found Judge on a 25-yard touchdown toss, extending the lead to 35-0 with 0:24 in the half. Robinson was 3-for-4 for 55 yards in the half with Anderson hauling in two passes for 49 yards.

LaMarque’s Robinson completed 3-of-8 passes for just 20 yards and the two picks, thanks to Shaw, in the first half. He had minus three yards rushing on seven carries. Brandon Jones led the Cougars with nine yards on four carries while Rian Anderson had two receptions for 16 yards.

To start the second half, the Mustangs held the Cougars to a quick three-and-out. Gales brought a punt back 21 yards to the Cougar 15 and Jailen Brown zipped his way to a nine-yard touchdown jaunt, making it 42-0 with 9:35 left in the third quarter.

Not longer after that, the two teams agreed on a running clock.

The Mustangs scored again early in the fourth quarter when running back Isaiah Thomas capped off a 10-play, 49-yard drive with a two-yard touchdown run. Thomas had four carries for 36 yards on the series.