What Made Orange Great: The Heritage House is the last of its kind 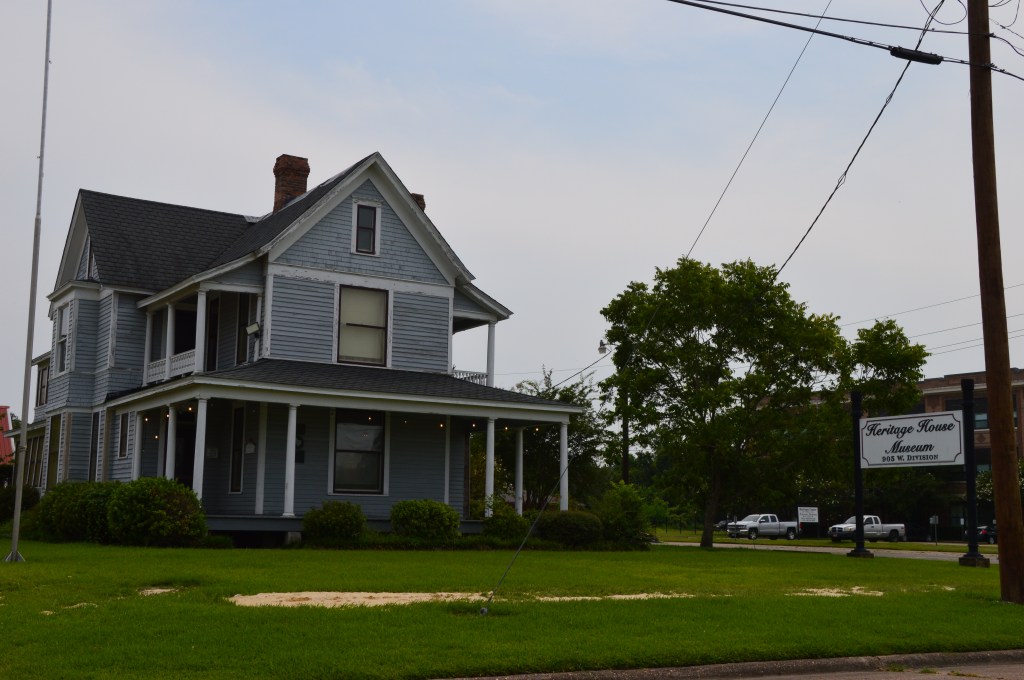 Dawn Burleigh/Orange Leader Heritage House Museum will soon open again after repairs from Hurricane Harvey are coming to an end.

Originally located at 809 Front Street was the home of Jimmy Ochiltree Sims. He was born February 5, 1874, his father was James Oscar Sims who had moved to Orange f rom Central Texas. James Sims had married Jennie Ochiltree, the daughter of Colonel Hugh Ochiltree, a prominent member of Orange society.

Jimmy Sims began working at the First National Bank at age 15 as a runner, or collections clerk.

On April 22, 1899, he married Mary Alberta Spooner. After their wedding, they lived in a small house behind the Presbyterian Church on Water Street.

His career at First National Bank would last 72 years. He would rise to bookkeeper, teller, vice president and finally Chairman of the Board.

He became a member of the Madison Masonic Lodge and the Presbyterian Church. He was on the board of the Pinehurst Country Club, and in 1912 served as treasurer of the Orange Rive Milling Company. One of his social activities was playing clarinet with the Orange Community Band.

Because of his position with the bank, he was a member of many social and business boards. Sims died at age 87, four years after retiring from First National Bank.

When Sims decided to build his home, he planned it very carefully. He wanted a simple, attractive, well designed home that could be easily added to when necessary. He wanted his home to reflect his stature both in business and society. The location he chose was two blocks from his place of employment, it was near his church and one block from the courthouse. The courthouse was the center of activity at that time. The house was also near the school his children attended.

The location was adjacent to the prestigious homes that were located along Green Avenue and away from the labor-class homes that lined the river.

The home was built of prime lumber. Sadly, the name of the contractor has been lost to history. The architecture of the two story home with an attic is plain and simple. It reflects the upper-middle class stature of the owner. The house is without the ornate embellishment  and gingerbread that is characteristic of the mansions that once lined Green Avenue.

The horizontal siding lines and balustraded porches with simple  decorative shingles along the sides are indicative of the period and status of the family.

The structure is the only one of its type being preserved in Orange. Almost all buildings of historical significance in Orange have been razed to permit commercial development along the main streets of Orange and the Historical Plaza area.

The original two storied wood framed home consists of six rooms, three on the first floor, three on the second floor and a finished attic. The cement asbestos shingled roof is gabled and the home was built of native pine and rested on a foundation of piers and beams.

Originally, there was a two-storied cistern made of wood that furnished water to the home. It was located at the rear of the home. There was a dark painted white trimmed outhouse located on a back corner of the lot.

In 1919, a remodel was done. A kitchen  pantry, bathroom, sun porch and open carport were added. There was also a two story detached garage with attic built.

A second floor addition included a bedroom with a fireplace, bathroom, sunporch, and an extension of the attic.

The cistern was removed, and indoor sanitary plumbing was installed.

The house was repainted silver grey with maroon doors and white trim. Shortly after the 1919 remodel a lawn tennis court was installed, one of only a very few in Orange.

The home contains five fireplaces with mantles made of wood and brick. The corner fireplace in the dining room is made of paint sculptured brick.

The house plan is rectangular with the upper rooms connected by a long hallway. Each upstairs porch connects to a porch either on the front or side of the house. The stairwell is centrally located with  elegant pine railings and posts.

Doors and window facings, baseboards, and moldings are made of highly varnished longleaf pine wood. Seven foot doors separate the dining and living rooms. Dutch doors lead from each of he front bedrooms to porches on the east and west sides of the house. The floors are end grained pine and hardwood finished. Both sun porches are lined with inland swinging French doors and ceiling fans installed for comfort. A wide porch encircles the parlor and serves as the front entry.

When Sims died in 1961 ownership of the property passed to his heirs. In 1977, the property was acquired by the City of Orange.

By contract, the property ownership was passed to the Heritage House Association of Orange County, Inc. Because of rerouting of city streets, it became necessary for the house to be moved to a new location, 905 Division Street. The house was restored to the configuration of the 1919 remodel. It is called simply the “Heritage House.”

The Heritage House is used as a historical museum for Orange County with special emphasis on teaching the area’s youth about Orange’s past history, culture, and architecture.