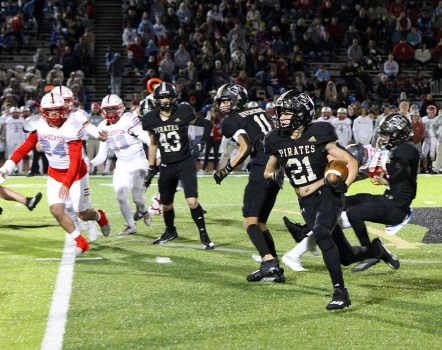 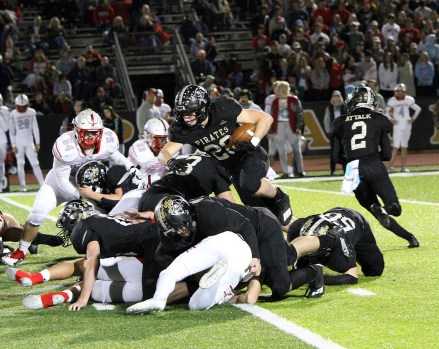 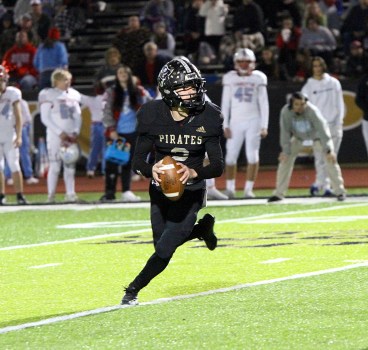 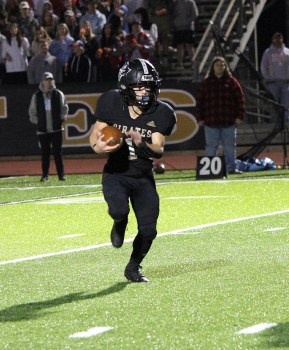 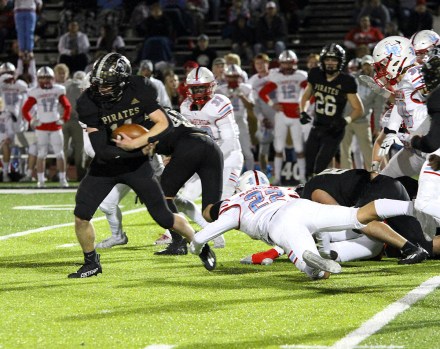 VIDOR – What a comeback in Pirate Country as the Vidor Pirates rallied from a 27-7 deficit to thwart the Lumberton Raiders 28-27 Friday night to claim the No. 1 playoff seed out of District 10-4A Division I.

Vidor’s offense was led by two guys rushing the ball. Quarterback Elisha Simmons and running back Layne Wilhelm were the leading rushers for the Pirates (8-1, 4-1). Simmons would rush 13 times for 98 yards, along with Wilhelm rushing 16 times for 91 yards. They were able to control the clock and keep up with the high powered Raider passing offense.

The Lumberton (6-4, 3-2) offense had a great game, but came up short when it mattered towards the end of the game. Lucas Powell would be the center of the Raider’s offense all night long, he finished 17-of-29- for 314 yards, including a big 78-yard pass to his main receiver on the night, Brady Fusielier. Fusielier would get five catches for 160 yards receiving on the night. His speed and crisp routes let him find space over the top of the Pirates’ defense. The Pirates secondary stepped up after halftime, and that was the biggest factor in deciding who won this game.

The atmosphere was electric in Vidor all game long. The crowd showed up in force on both sides and the Pirate players showed their passion for this win on the field. Momentum went back and forth, making for an exciting roller coaster of a game all night long.

The Pirates ended up outgaining the Raider 410-332, with 341 yards coming off their vaunted Slot-T offense.

The Raiders got on the board on the first drive of the game. Powell would get the passing game early with a couple of good passes, including a touchdown pass to cap off the drive. Powell would find Cade Harmon for a good 11 yards. The running game couldn’t quite get off the ground so the pass game took flight. Powell found Fusilier for a big 34-yard touchdown pass. After the PAT the Raiders took a 7-0 lead with eight minutes left in the first quarter.

The Pirates got on the board, thanks to an explosive play from Simmons. The Pirates, as usual, would spread the ball to around five different backs on the series. Marching down the field, they would peck away at the Raider defense. Simmons took a QB keeper around the outside, tip-toe the sideline and burst away for a 33-yard touchdown run. After the PAT the Pirates tied the game at 7-7 with 10 minutes left till halftime.

Powell lets loose with the passes on the next series, exclusively using them to get down the field this time. It would only take four passes, two to Fusilier for 11 and 28. The 28-yard pass would go the distance for a touchdown, racing past the Pirate defense. The PAT went wide as the Raiders took a 13-7 lead with 9:40 left in the second quarter.

Powell continued to let it loose with the ball, finding multiple big plays for another touchdown. After getting bad field positioning, the Raiders didn’t let that affect them. Powell’s passing made the positioning null and void. Powell would find Trey Kersh a couple times, for an 11-yard pass and a big 43- yard touchdown pass. Kersh spedpast the Pirates for the long score. The PAT went through, making the score 20-7 Raiders with two minutes left in the half.

The Raiders came out of halftime with a one-play drive to extend their lead even further. Powell dropped back and ffound Fusilier on the first play of the drive. Fusilier reached up and snagged the ball away from the defender, broke another tackle and sprinted for the end zone for a 78-yard score. After the PAT the Raiders led 27-7 with nine minutes left in the third quarter.

The Pirates answered with a quick touchdown of their own. The Pirates run game would start to march down the field, getting five or six yards a run. Seth Nunez got a misdirection run to the left, making the defense hesitate and go a good 11 yards and put them in the red zone. Simmons would punch it in from the 1ne after pushing the ball to the 1. The PAT would go through, making the score 27-14 Raiders, with five minutes left in the third quarter.

The Pirates brought it to a one-score game to start the fourth quarter. Simmons and Wilhelm would get the majority of the carries on the march, chipping at the defense like they do every drive. This time they were able to use the air game to help in a crucial first down. Simmons connected with Brayden Root for a big 11-yard first down. The Pirates would punch it in thanks to Wilhelm with a one-yard TD dart. The PAT would go in, and the Raiders lead was only 27-21 with eight minutes left in the fourth quarter.

The Piratessnared the lead and never relinquished it midway through the fourth quarter, thanks to their efficient run game. Wilhelm got the majority of the carries this drive. The Pirates chipped away for a few plays, before Wilhelm broke free up the middle. He would broke a big 33 yard run, tricking the defense with misdirection again and cruised into the end zone. After the PAT the Pirates led 28-27 with five minutes left to play.

The Pirates wheldup defensively down the stretch and halted the potent Raiders offense after they got going in the third quarter. The Pirates now look to take this momentum to the playoffs. The crowd was just as excited as the players on the field, making for a Friday Night Classic from Vidor.