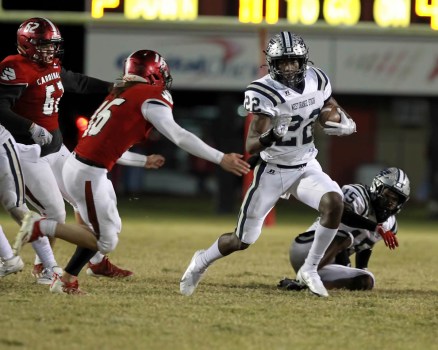 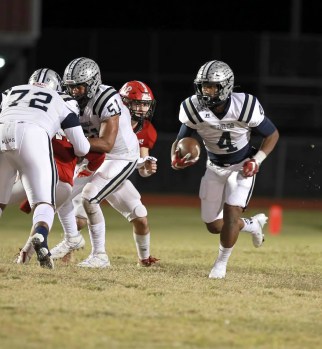 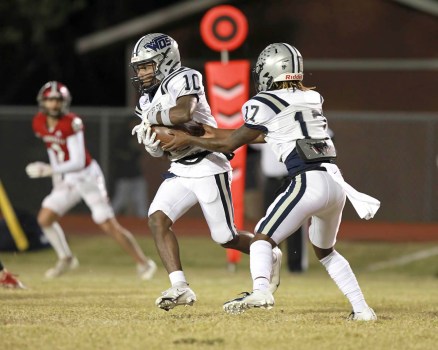 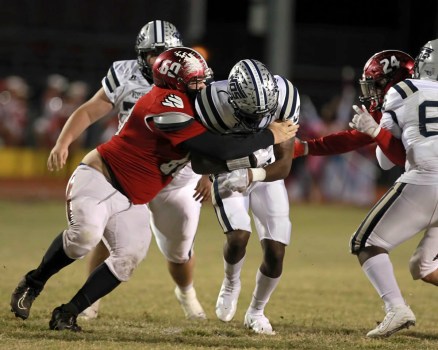 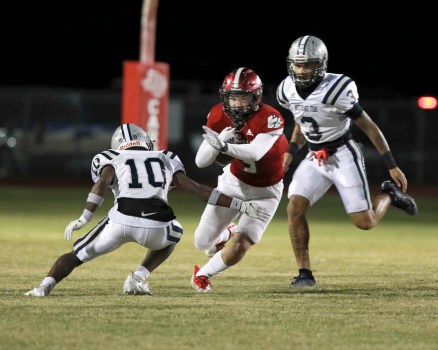 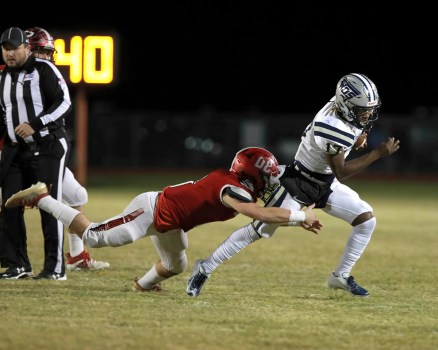 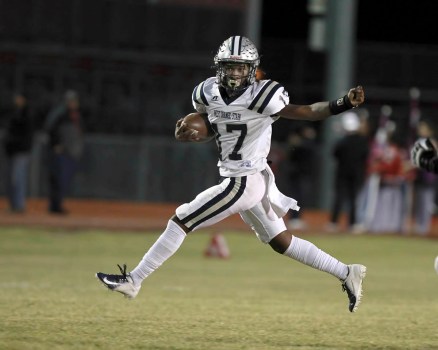 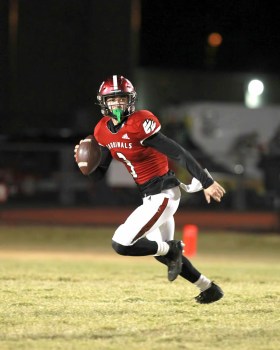 BRIDGE CITY – Taking advantage of a slew of Bridge City mistakes and limiting the Cardinals to a minus 30 yards of total offense, the West Orange-Stark Mustangs cruised to a 42-0 District 11-4A Division II victory Friday night at Larry Ward Stadium.

The district champion Mustangs (8-1, 6-0) have now won 61 straight district games under the direction of long-time coach Cornel Thompson as they wrapped up another perfect district campaign. The Mustangs have also never dropped a game to the Cardinals in the long history of the series.

WO_S will now head into the Class 4A Region III Division II bidistrict playoffs next week and will meet LaMarque, the fourth-place team out of 12-4A, at Randall Reed Stadium in New Caney Thursday.

The Mustang defense limited the Cardinals (4-6, 2-4) to minus 33 yards rushing on 33 carries and limited Cardinal quarterback Ethan Oceguera to 5-of-12 passing for just three yards. Cardinal back Kyler Garlaska had 38 yards on 22 tough carries.

WO-S was able to utilize almost everyone on its roster, including using three different quarterback.

The Cardinal defense played pretty well for the most part as the Mustangs finished with 259 total yards.

Senior standout running back Elijah Gales scored three touchdowns in the first half before resting the rest of the night. He had 62 yards on seven rushes and two scores and caught three passes for 26 yards and a TD. Fellow back Jamaal Shaw scooted for 69 yards on just three carries and scored. Mustang starting quarterback Keyshawn Robinson completed 9-of-15 passes for 59 yards.

The Mustangs racked up three touchdowns taking advantage of Cardinal miscues and they held Bridge City to a minus 32 yards as they went into halftime with a 21-0 lead.

Mustang defensive back Dontrey McCalin picked off a Oceguera pass at the Mustang 37 and returned it to the Cardinal 35 with 9:57 left in the first quarter.

Gales scored four plays later when he scooted up the middle untouched from 26 yards out on fourth-and-1. Cristian Quiteno Polio booted the extra-point to put WO-S up 7-0 with 7:56 in the first.

The Mustangs got great field position again when they tipped a Cardinal punt that went seven yards as they set up shop at the Cardinal 31 with 5:24 in the first quarter. WO-S scored five plays later when Robinson connected with Gales on a short pass to the right side, Gales shook off a Cardinal defender and went 20 yards for the score, pushing it to 14-0 with 2:01 in the first quarter.

WO-S cashed in on another Cardinal miscue in the second quarter. A bad punt snap sailed over BC punter Justin Abate’s head and went all the way back to the Cardinal 2 for a 34-yard loss.

Two plays later Gales, who had 62 yards on seven carries in the first half, scored his third touchdown with a two-yard run up the middle, making it 21-0 with 4:39 in the half.

The Mustangs had 133 yards in the first half. Robinson completed 6-of-11 passes for 35 yards.

The Cardinals had minus 35 yards rushing on 17 carries with the 34-yard loss on the punt snap being a tough one. But they had a minus one yard on their other 16 official carries. Kyler Garlaska had 15 yards on 10 carries. Oceguera was 3-for-5 and had three yards passing.

After a failed onside kick attempt by the Cardinals to start the second half, Shaw took a handoff on the Mustangs’ first play and outsprinted the Cardinal defense for a 52-yard touchdown scamper, pushing it to 28-0 with 11:44 in the third.

The Mustangs cashed in on another Cardinal blunder with 5:26 remaining when they tipped a Cardinal punt and Carlton Simien Jr. caught it in mid-air and went 18 yards for a touchdown, making it 35-0.

The Mustangs utilized a short field late in the game to go 25 yards in three plays. Backup quarterback Chris Jones carried twice for 24 yards and running back Isaiah capped it with a one-yard touchdown, pushing it to 42-0 with 2:23 left.