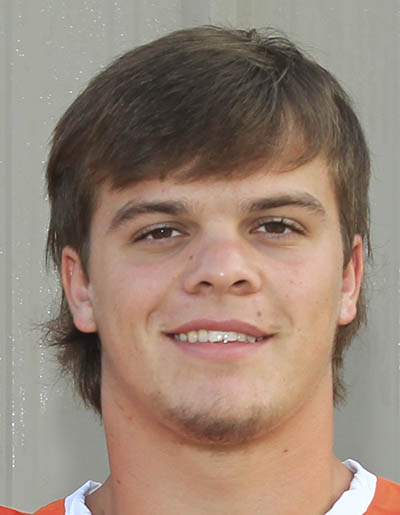 The Bobcats’ backfield was equally impressive on their next drive. Gavin Perry-Koci led the way this time with three rushes for 40 yards, bringing Orangefield into the red zone. Brayden Babineaux capped off the 10-play drive by punching in a three-yard touchdown rush, extending the Orangefield lead to 14-0.

The Hawks (1-8, 0-6) finally gained a first down on their third series but fumbled the ball on the next play. Lineman Kolbie Sowell recovered it for the Bobcats at their own 49.

Orangefield ran a flea flicker to start the drive, and Dischler threw a 38-yard pass to Morgan Sampson. Three plays later, Hunter Ashworth ran the ball in for a two-yard score. The Bobcats remained ahead 21-0 with 9:38 left to play in the second quarter.

After a very slow start, the Hardin-Jefferson offense began to show signs of life. Quarterback Brady Trotter connected with Keith Andrus for 12 yards, then found Jacob Weldon on the sideline for another 29 yards. Weldon then put the Hawks on the board with a seven-yard touchdown rush, bringing the score to 21-7.

Orangefield got the ball back with five minutes to go before halftime. Due to several penalty calls, the Bobcats faced an improbable first-and-33 but would somehow manage to convert and move the chains. Cade Smith lofted a 30-yard pass to Sampson, setting the Bobcats up for a 29-yard field goal attempt. However, Orangefield faked the field goal and Babineaux tossed a 9-yard touchdown pass to Sampson as time expired. The ‘Cats missed the extra point, leaving them ahead 27-7 at the half.

Hardin-Jefferson attempted an onside kick to open the third quarter but failed to recover. The Hawks’ defense came out of the half with a renewed energy, forcing the Bobcats to punt for the first time.

Taking over from their own 31, HJ attempted to mount a comeback. After a short drive downfield Weldon would break free from his defender and haul in a 35-yard dime from Trotter for an easy touchdown. The Hawks inched closer, 27-13.

The Hardin-Jefferson defense shut down their opponent’s rushing attack again on the following drive. Luke McCullough blocked the Bobcats’ punt, downing it at the HJ 33. The Hawks only managed 21 yards of offense before Jackson Humplik intercepted a pass to give Orangefield the ball back.

The rest of the third quarter, and much of the fourth, were mostly uneventful for both teams. Neither offense could gain much ground, leaving the punters busy. With 4:57 left in the fourth quarter, the Hawks appeared poised to strike back. Hardin-Jefferson’s offense moved the ball 63 yards downfield and into the red zone. Facing a crucial fourth-and-seven, Trotter dropped back to pass but threw an interception into the waiting hands of Dischler, eliminating all hope of a Hawks’ comeback.

Orangefield ran the remaining 1:25 from the clock to secure the 27-13 victory.