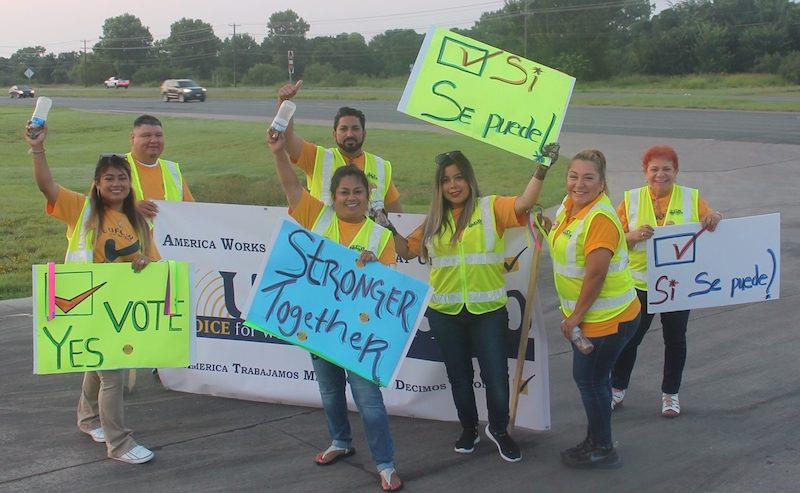 Photo courtesy of ufcw.org Under the Protecting the Right to Organize (PRO) Act, employers would be required to notify all new employees of their rights under the National Labor Rights Act, and post those rights where employees congregate.

HOUSTON — Even before last year’s election, President Joe Biden expressed his support for unions. Now it is up to Congress to decide if laws protecting union workers will be included in the long-awaited reconciliation bill.
The Protecting the Right to Organize Act (PRO Act) was approved by the House but blocked in the Senate. Some elements are nonetheless included in the reconciliation bill.
Robin Johnson, representative for state legislation for the Communications Workers of America (CWA) Local 6215 in Texas, said the Act would ensure a greater level of fairness.
“As Texans, no matter our race, where we come from or what jobs we have, we deserve the right to have a voice at work,” Johnson asserted. “We can improve the lives of Texans by coming together and demanding better. Forming a union is what coming together looks like in the workplace.”
As written, the PRO Act would set penalties for employers who retaliate against workers who organize. The U.S. Chamber of Commerce argued the bill would undermine workers’ rights, ensnare employers in unrelated labor disputes and disrupt the economy.
Dan Mauer, director of government affairs for the CWA, disagreed with the Chamber’s assessment, saying the expansion of employees’ power could be good for business growth.
“It’s been harder and harder for workers to organize,” Mauer explained. “If we want to rebuild the labor movement and in turn rebuild the middle class, we’ve got to make sure that those issues get corrected.”
Sara Walling, senior campaign lead for the CWA, believes it is time legislation better protected those people most vulnerable to discrimination and employer abuse, including the LGBTQ-plus community.
“When workers who are LGBTQ, or women workers, or Black and brown workers have a voice at the table, they’re much more likely to have their concerns heard and met,” Walling contended.
Walling added the PRO Act could invigorate the labor movement, where currently only 6% of private-sector workers are in unions, the lowest level in a century.