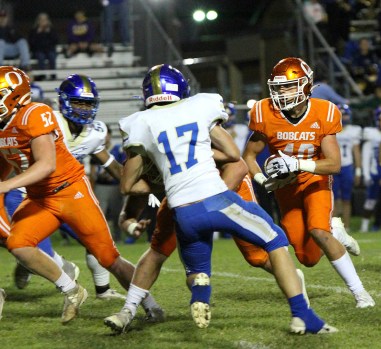 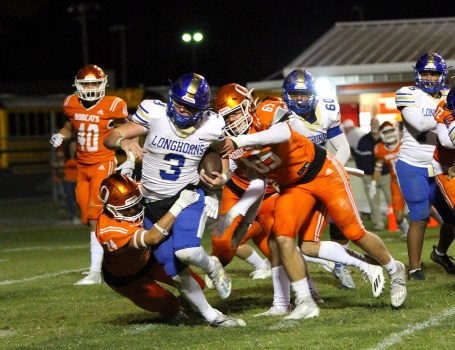 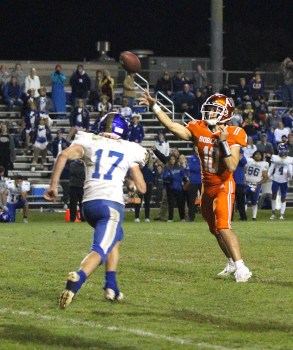 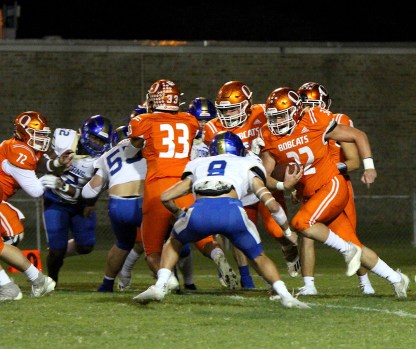 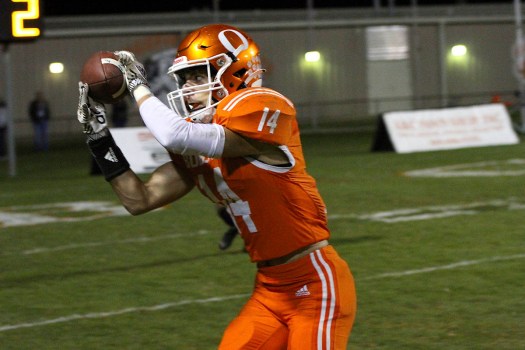 ORANGEFIELD – The Hamshire-Fannett Longhorns thwarted Orangefield from earning the No. 2 playoff seed out of District 11-4A Division II for now by downing the Bobcats 35-28 on Orangefield’s home turf Friday night in a hard-fought battle.

The crowd was treated to a heated back and forth game from these two teams, as both left everything on the field for a chance to win this game but it was the visitors that walked away with the victory.

For the Bobcats (6-3, 3-2), running Cameron Dischler showed up big. Dischler zipped for 191 yards this game, including a big 66-yard touchdown run, and another 36-yard run. His ability to stretch the field and break wimpy tackles was a big reason he succeeds in the Bobcat Slot-T. Not to mention the offensive line putting in work each play to open up holes for him.

Offensively for the Longhorns (6-3, 3-2), quarterback Kheagian Hackaman had a great game under center. He used his legs early and often against the Bobcats, his bigger stature and speed let him run like a runningback out of the backfield. He would rack up 81 rushing yards on the night, and go for 201 yards in the air. He was the focus of this Longhorn offense, and showed why they trust him with the ball so much.

This game came right down to the wire, and both teams delivered. The only thing the Longhorns had over the Bobcats were the special teams. The Bobcats would get bad snaps on a few punting attempts, as a result the Longhorns got the ball in enemy territory, not needing much to turn it into points. If those punt plays went a different way, it could have been a different story.

The Longhorns scored with 1:31 remaining and then held off a late Bobcat surge that ended inside the Longhorn 7 as H-F finished with a solid defensive stand.

The Bobcats finished with 383 yards while the Longhorns had 374.

Now the Bobcats find themselves in a tie for third with Hamshire-Fannett, a half game back of second-place Silsbee (5-4, 4-2). Silsbee defeated Hardin-Jefferson (1-7, 0-5) 49-28 Friday and will have its bye week next week.

An Orangefield win over Hardin-Jefferson on the road and a Hamshire-Fannett win over Liberty (4-5, 1-4) at home next week, would force a three-way tie for second with Silsbee.

The Bobcats get on the board first, thanks to their efficient run game. Starting on their own 15, the Bobcats made their way down the field methodically. Dischler and fullback Hunter Ashworth were the main workhorses of this drive. Dischler would break open with a big 18-yard run on the second play. Ashworth would mix in with a good handful of up the middle runs for some gritty yards. Dischler would eventually punch it in from the one for the score. The Bobcats made the PAT and went up 7-0 with just under four minutes left in the first quarter. Ashworth had 48 yards on 11 carries.

The Longhorns struck back thanks to a botched punt attempt from the Bobcats. After a bad snap on the punt, the Longhorns got the ball on the Bobcats 28. Heckaman would take it around the outside and get through a few tacklers for the big 28-yard run for the score. The PAT would go through, evening the score at 7-7 with 8:46 left in the second quarter.

Heckaman finds the end zone again, this time his arm was able to help him down the field. Hackaman would run the ball six different times on the march, for a few yards each time. Hckaman found D’onte Zeno for a big 26-yard pass, after having plenty of time in the pocket. Hackaman finished off the drive with a rush around the outside for the score. The Longhorns made the PAT and took the lead, 14-7 with 3:30 left in the first half to play.

The Bobcats responded on the next drive with a big one-play drive to tie the game up for the second time. Bobcats would start their drive on their own 34 after the kickoff. Dischler would get the first call, and bounce the run around the outside for more room. Dischler would speed past and stiff-arm his way for a 66-yard run and touchdown. The PAT went through and the Bobcats tied the game at 14-14 with just over three minutes left in the first half.

The Bobcats came out from halftime with a fire under them, as they scored a quick touchdown to take the lead back. After a good kickoff return put them at their own 48, the Bobcats had great position to drive down the field. Dischler would break another big run, this time for 36 as he weaved through the Longhorn defense. Ashworth would punch it in a couple of plays later from four yards out for the score. The PAT went wide, making the score 20-14 Bobcats, with 9:12 left in the third quarter.

The Longhorns fired back with another touchdown thanks to a big play and great positioning on the kickoff. After starting on their own 48, the Longhorns made quick work of the drive. Jordan Denson would get a handoff up the middle, found a big hole and took off for a big 48-yard play, and put the Longhorns on the Bobcat 2. Heckaman would punch it in from two yards out for the Longhorns score. The PAT would go in, and the Longhorns took a one-point lead, 21-20 with 6:40 left in the third quarter.

The back and forth continued with another touchdown from the Bobcats, Dischler adding to his great game already. Dischler would get the bulk of the carries, but quarterback Brayden Parker put them in the red zone with a big pass to Dischler for 20 yards. Dischler punched it in from there for the score. Dischler walked in the 2-point conversion to make the score 28-21 with 11:56 left in the fourth quarter.

The Longhorns zipped the ball right back down the field and answered the Bobcat score with their own. Heckaman used his arm more this drive, finding Traevon Ford for a few big passes. Starting on their own 32, Heckaman hit Ford for 18 and 24-yard passes, over the Bobcat defense. Running Back Tyler Spencer punched it in from three yards out to finish off the drive. The PAT went through to tie the game at 28-28 with just over six minutes left in the fourth quarter.

The Longhorns stopped the Bobcats and took a late lead in the fourth quarter. The Longhorns would hit some more big passes onwhat would be the game-winning drive, to get out of some bad long yardage situations. D’onte Zeno got a backwards pass and let it loose to Ford way down the field for 15 yards to get a crucial first down, followed by Heckaman finding Austin Baker for 29 yards and a touchdown for the Longhorns. The PAT went through, making the score 35-28 with 1:31 left in the fourth quarter. Ford finished with six catches for 98 yards.

The Bobcats drove down the field with less than two minutes left to play. Parker would put his arm on show to attempt a wild comeback drive. Parker hit Morgan Sampson a couple times, the longest going for 19 yards. The Bobcats made their way all the way to the Longhorn 7, but would come up just short. The Longhorns defense stiffened up and held the wall at the goal line. Parker completed 7-of-12 passes for 103 yards.