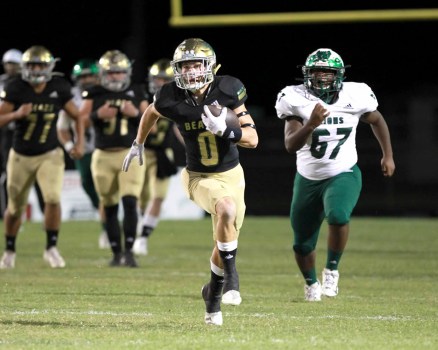 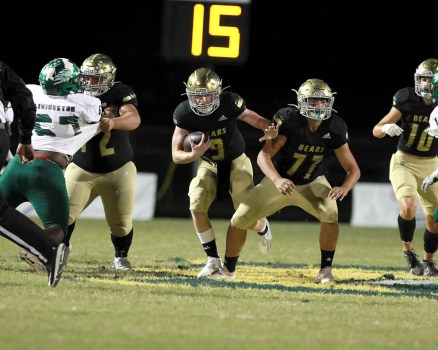 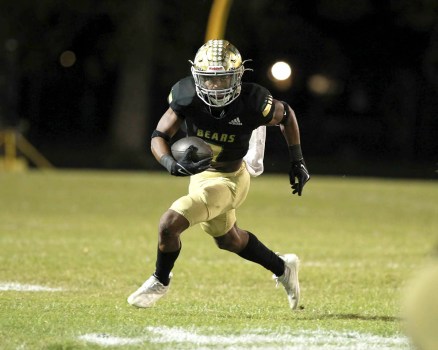 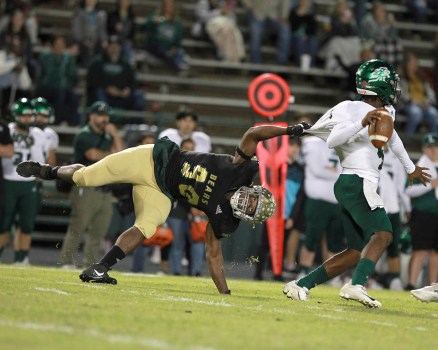 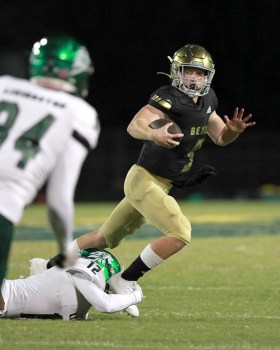 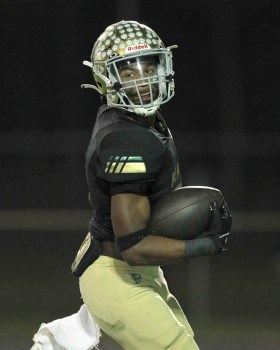 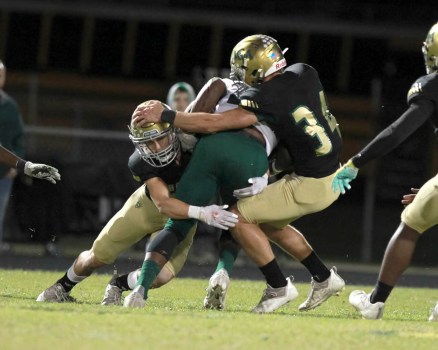 LITTLE CYPRESS – Little Cypress-Mauriceville still has their eyes set on a possible District 10-4A Division I title as they took down the Livingston lions 33-15 on Senior Night at Battlin’ Bear Stadium Friday night.

The game was much closer than the final score indicated as the Lions (5-4, 1-3) made a late threat to try and go ahead only to see the Bears (7-2, 3-1) close it out with two plays near the end of the game.

The Bears were leading 21-15 and forced a Lions’ incompletion on fourth down from the LC-M 39 with 1:52 remaining. Bear quarterback sealed the deal with a 61-yard touchdown gallop and on the last play of the game, D’Marion Morris picked off Livingston quarterback Jontavian McNeal and returned it 86 yards for a score to end it.

It was a night to remember for Landry and Morris. Morris found the end zone three times and Landry twice. Landry went over the 1,000-yard mark for the year in the passing department. He was 7-of-15 for 103 yards and now has 1,048 on the season. Morris zipped for 78 yards on 13 carries with two rushing TDs to go with his pick-six and now has 1,031 yards on the ground. Landry finished with 128 yards on 17 totes and has rushed for 778 yards. Morris also hauled in three passes for 35 yards. Carson Peet had three catches for 66 yards for the Bears, who outgained the Lions 309-282 on the night.

The Bears visit Splendora in their regular season finale while Lumberton visits Vidor. If LC-M defeats Splendora and Lumberton beats Vidor, then LC-M would represent the district as the top seed in the playoffs due to their 33-31 win over Lumberton.

The Bears jumped out 14-0 with 11:24 left in the first half but the Lions fought back to get within 14-9 by intermission.

After holding the Lions to a quick three-and-out, the Bears struck nicely with a big eight-play, 80-yard scoring march on their first series of the night.

The big play of the series came when Landry hit Carson Peet in stride over the middle on a short pass and Peet sprinted 45 yards down the left side to the Lion 35.

Landry connected with Morris on a beautifully executed screen pass along the right side that would go 12 yards to the Lion 2. Morris capped it off with a two-yard touchdown dart up the middle. Justin Rainey booted the extra-point, giving the Bears a 7-0 lead with 7:18 left in the first quarter.

After holding the Lions to another three-and-out, the Bears took over at their own 46 and moved the leather 54 yards in six plays to hit paydirt again.

Landry had a big 10-yard keeper and found Morris on a 13-yard pass on a third-and-12 play that got to the Lion 29. On the next play, Morris showed his speed, finding a hole in the middle and outracing the Lions secondary for a 29-yard touchdown jaunt, making it 14-0 with 11:24 in the half. The score was nice, because the Bears saw a 36-yard touchdown pass from Landry to tight end Dean Reynolds get called back due to an illegal receiver down field call.

The Lions countered nicely though on the next series as McNeal engineered a 13-play, 69-yard scoring drive. He completed four passes for 40 yards and had a huge 11-yard run to the Bear 7 on a third-and-9 play.

The Bear defense was holding tough but McNeal was able to get into the end zone on fourth-and-goal from the 1 as he scored off the right side. The Lions went for the two-point conversion but Lynn Johnson was stuffed as the Bears held a 14-6 lead with 3:40 in the half.

The Lions cashed in three points late in the half thinks to a Bear turnover.

Livingston linebacker Willie Fagan picked off a Landry pass that was tipped to him at the Bear 35 and returned it to the Bear 8 with 2:01 in the half.

On third-and-goal from the 4, McNeal found running back Brayden White over the middle of the end zone but the touchdown was called back after a false start. The Lions suffered another false start and settled for a Eric Vasquez 27-yard field goal, trimming it to 14-9 with 0:08 in the half.

Landry completed 4-of-9 passes for 80 yards with Morris hauling in three receptions for 35 yards and Peet with his one big haul-in for 45. Morris rushed for 45 yards on seven totes.

McNeal was 4-for-5 for 40 yards for Livingston and he had 23 yards on nine carries while Lynn Johnson had 20 yards on seven carries.

The Bears marched from their own 30 to the Lion 27 on their first series of the second half, running the ball well, but Landry was picked off by Fagan again in the Lion end zone with 7:10 in the third.

The next time they had it, the Bears navigated 77 yards on seven plays, 75 of it coming on the ground.

Landry carried four times for 41 yards on the march, including a 24-yard touchdown scamper around the right side, making it 21-9 with 1:36 in the third. Morris had two totes for 19 yards on the series, including a 15-yard jaunt.

The Lions got right back into it with a quick six-play, 54-yard drive midway through the third quarter. The big play was a 44-yard pass from McNeal to a wide open Noah Hargraves that went all the way to the Bear 3. Two plays later McNeal took it in from a yard out. The two-point conversion run failed but the Lions trimmed it to 21-15 with 6:07 remaining.

The Lions got the ball at their own 34 with 4:24 left. McNeal had a 11-yard run and the Lions got 15 more yards on a facemask by the Bears to set up shop at the Bear 40. McNeal hit Kendrick Williams with a 11-yard pass to the Bear 29. However, Amir Washington sacked McNeal for a six-yard loss. The Lions were then called for a chop block, moving it back to the 50. Johnson had an 11-yad run back to the Bear 39 but McNeal tossed an incompletion on fourth-and-20.

Morris added to the Livingston misery when he took a desperation McNeal pass 86 yards to the house to cap it.

The Lions return home to face Huffman next week.