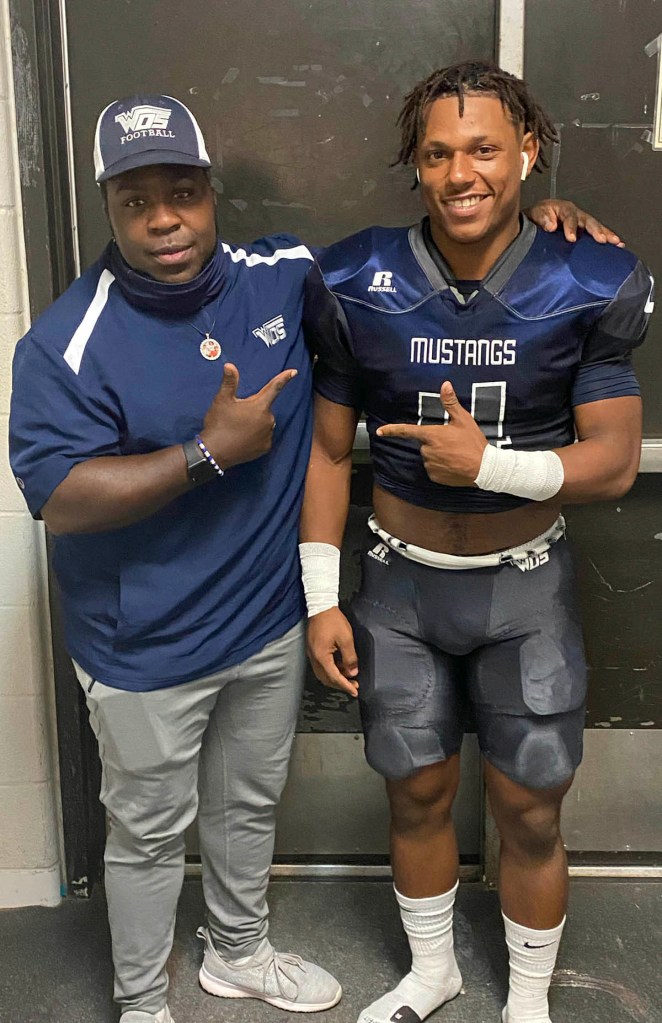 Van Wade WO_S running back Elijah Gales has fun with Mustang running back coach Depauldrick Garrett after the game Friday. Gales set the new career rushing mark at WO-S in the win over Liberty. Gales now has 3,258 yards, surpassing Coach Garrett's mark of 3,257.

WEST ORANGE – It was quite a celebration at Hooks Stadium Friday night as the Mustangs nailed down their 12th straight district title and the Mustang faithful was able to catch standout senior tailback Elijah Gales set the all-time career rushing mark in as they buried the Liberty Panthers 73-7 in District 11-4A Division II play.

Gales needed 143 yards to set the all-time rushing mark and he finished with exactly that as he rolled up 143 yards on 20 carries and scored four touchdowns. Gales now has 3,258 career yards. He passed Mustang running backs coach Depauldrick Garrett, who bruised his way to 3,257 career yards.

The Mustangs scored in a variety of ways to roll over the Panthers.

WO-S outgained Liberty 367-125 and the Mustangs created points from their defense and special teams.

WO-S quarterback Keyshawn Robinson completed 7-of-10 passes for 110 yards and a score.

Liberty quarterback Kaden Nolan completed 5-of-16 passes for 104 yards and was picked off twice. Panther receiver Gavin Fontenot had three catches for 107 yards while running back Jolan Curtis had 62 yards on 23 carries. The Panthers finished with just 21 yards rushing on 35 carries.

Things went downhill quick for the Panthers in the second quarter as the Mustangs outscored them 30-0 en route to a 38-0 halftime advantage.

The Mustangs zipped 78 yards in eight plays on the first series of the night.

Gales carried four times for 40 yards on the march and Robinson connected with Darren Anderson on a 37-yard screen pass along the right side for a touchdown. Gales ran in the two-point conversion to give the Mustangs the 8-0 edge with 8:44 in the first quarter.

Gales fumbled a punt return attempt at the Liberty 49 with 6:07 in the first quarter. The Panthers managed to get the ball to the Mustang 29 but Liberty kicker Brayan Montes was short on a 46-yard field goal attempt.

The Mustangs exploded in the second quarter. It got started when Jalen Lewis blocked a Panther punt to give the Mustangs a first down at the Liberty 22.

The Mustangs had a couple setbacks with two holding calls but bounced back nicely. Robinson connected with Dontrey McClain on a 23-yard pass that got down to the 14. Two plays later Gales bolted straight up the gut for an 11-yard touchdown dart. Cristian Quiteno Polio booted the extra-point to make it 15-0 with 7:20 in the half.

Liberty receiver Alex Valtierra fumbled the ball over to the Mustangs at the Panther 36 after a five-yard reception with 7:10 in the half.

The Mustangs scored four plays later. Robinson had a superb 20-yard dash to the 1 and Gales capped it with a one-yard score, pushing it to 22-0 with 5:56 in the half.

The misery continued when swift Mustang defensive back Dakarion Judge stepped in front of a Nolan pass and took it down the right sideline for a 37-yard interception return for a touchdown, making it 29-0 with 5:42 in the half.

After a bad Liberty punt snap the Mustangs took over at the Panther 8. Two plays later Gales cruised around the left side for a seven-yard touchdown gallop, making it 36-0 with 3:53 in the half.

The Mustangs added a safety with 2:33 in the half when the ball sailed over the punter’s head into the end zone.

Robinson completed 6-of-9 passes for 105 yards in the first half with Anderson catching two for 44 yards. Gales darted for 99 yards on 15 carries.

Nolan completed 4-of-12 passes for 74 yards with receiver Gavin Fontenot catching two passes for 77 yards, both catches coming on the last series of the half.

Curtis led the Panther ground game with 38 yards on 13 carries.

It got rougher for the Panthers in the second half.

The Mustangs went 74 yards in five plays on their first possession of the half. Gales had four carries for 35 yards and Jailen Brown capped it with a 39-yard touchdown scamper to make it 45-0 with 8:02 in the third.

The Panthers finally answered with a quick two-play, 50-yard drive as Nolan found Fontenot on a 30-yard pass and Curtis finished it with a 20-yard touchdown jaunt up the middle with 7:14 in the third.

It was Judge’s turn to electrify the Mustang faithful again when he took the ensuing kickoff and scooted 97 yards down the left sideline for the score, pushing it to 52-7 with 6:55 in the third.

Judge picked off another Nolan pass at the Liberty 33 and the Mustangs scored six plays later when Dustin Helm scored from three yards out.

WO-S put together a nine-play, 68-yard scoring march and running back Isaiah Thomas capped it with a three-yard touchdown to make it 66-7 with 9:15 remaining.

Helm finished up the scoring with his second touchdown as he scooted around the right side for an eight-yard touchdown with 4:53 left.

The Mustangs have their bye week next week before closing the regular season Nov. 5 on the road at Bridge City while Liberty returns home Friday to face Bridge City.

Bobcats power their way past Cardinals, 23-14