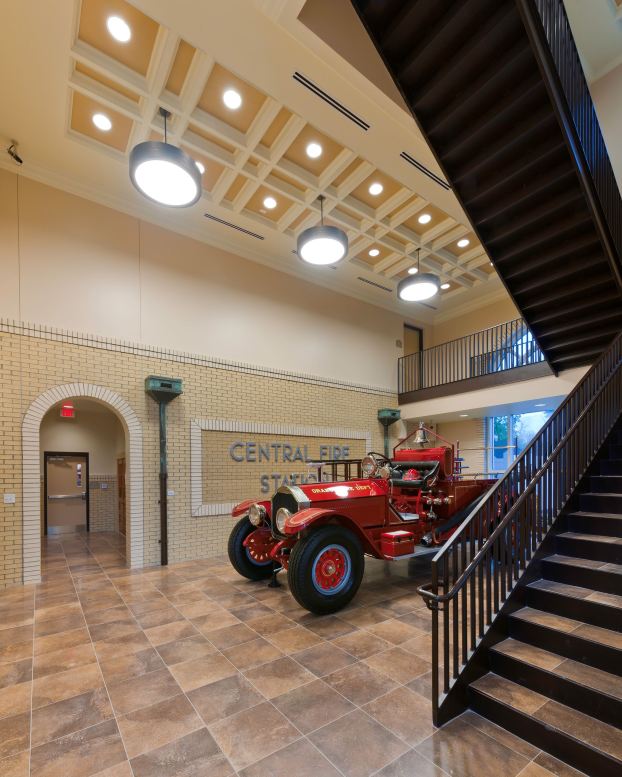 Courtesy photo A look inside the Central Fire Station located in downtown Orange.

What Made Orange Great: Orange had a Volunteer Fire Department from 1870-1955

Sometime in 1870 the first piece of fire fighting equipment arrived in Orange. It was brought from Galveston on a two-masted schooner owned by Captain J.R. Bolin. The men of the fire department were excited to receive the man-pulled fire wagon equipped with a man-powered pump.

At that time, the firehouse was located at the foot of Fourth Street so they would have ready access to water from the river. For some reason, not remembered, the fire house was sold and the money from the sale divided among the firemen.

Orange Commissioners Court Records for November 11, 1890, show an application was approved for the construction of a two storied frame building about 24X30 feet to be built on the southeast corner of the courthouse block. It was to be erected by the hook and ladder fire company and occupied by the fire department.

There are no records of the building ever being constructed.

The original charter for the volunteer fire department was issued on March 17, 1880. About the turn of the 20th Century a new fire station was built on Division Street at the river. The city equipped the volunteer firemen with a horse drawn fire wagon and a pistol to fire to sound fire alarms. It was an exciting method to sound alarms and some citizens continued to fire pistols long after the steam whistle was installed about 1904.

Bonds were issued by the city in 1904 for the erection of a fire station and city hall on Main Street between Fourth and Fifth Streets.

During these early years there was only one paid employee of the fire department, he was the driver of the fire wagon. He was paid $80 per month. From this he purchased feed for the horses and for shoeing the horses and any repairs the equipment needed. The script he was paid with was discounted 20% by the city so the driver was left with only $64.

Percy Adams was the first employee of the fire department. He drove a single horse fire wagon until it was replaced by a pair of black ponies. He trained the pair of blacks and George Reyes drove the pair.

Later the wagons were increased by the use of a pair of yellow horses. Horses served for nearly 20 years until they were replaced by mechanized equipment.

L.B. Adams was a volunteer fireman who drove the fire wagon pulled by horses named Josie and Wanda. Adams said the horses could pull the wagons faster than the motorized trucks.

When water pressure became available a hose wagon replaced the steam engine and in 1912 a chemical and a ladder truck came into use. Old No.1 the first piece of motorized equipment was purchased in 1914 and the next year a fire system with automatic fire whistles was placed in service.

In 1917, a second motor powered fire engine, No. 2 was purchased. No.3 was purchased in 1918. For years after they were taken out of service the old engines were kept in running condition and stored in an unused fire station.

Between 1940 and 1950 the department added six new, modern fire trucks. They opened the Burton Street and Riverside Addition fire stations, and also built and manned fire stations at Pine Grove and Border Street.

In 1949, the department moved into a new central fire station on Seventh and Elm Streets. At that time the department consisted of 22 paid firemen and 15 volunteer firemen.

In June 1949, the City of Orange signed a contract with the Orange County Commissioners Court to make fire runs outside of the city limits. As part of the contract the city purchased at a cost of $85,000, a high pressure John Bean pumper.

In later years, the contract between the city and county was abandoned, leaving residents living outside the city limits unprotected except for volunteer fire departments in the smaller communities. Those communities worked up to having fully staffed and well equipped fire departments.

In 1952, Vertis Sands was elected fire chief by the volunteer department. Two years later, rescue equipment was purchased for the fire department through donations. The equipment included a 1954 Chevrolet panel truck with lifesaving equipment and a boat and trailer.

In 1955, a document was granted to supersede the 75 year old charter and on December 1, 1960, the Orange Volunteer Fire Department was disbanded, and all firemen became city employees. There were 33 firemen that year.

In 1936, in an article written for the Centennial Edition of the Orang Leader it was written, “The Orange Fire Department is declared to be one of the most efficient in the entire State of Texas. In addition to training the men to fight fires, nearly all the men are trained in first aid and lifesaving.”

It seemed that over the years, things only got better for the Orange Fire Department as newer and more modern equipment was purchased and the training was increased. The statement made in 1936 holds true today.