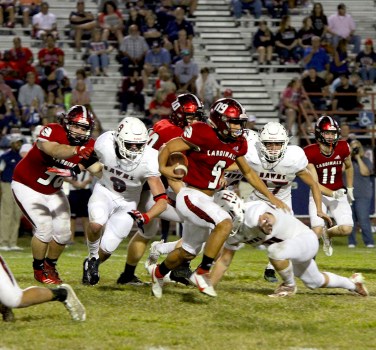 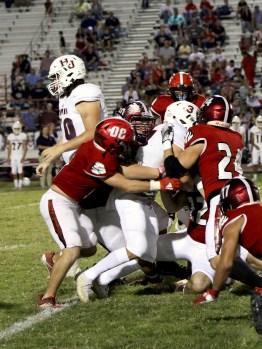 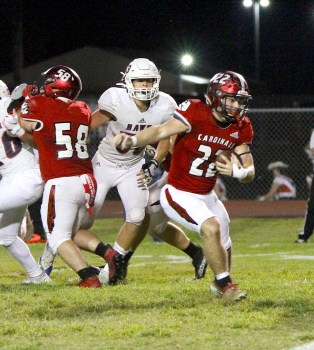 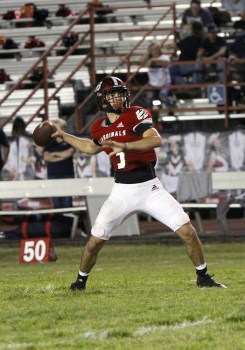 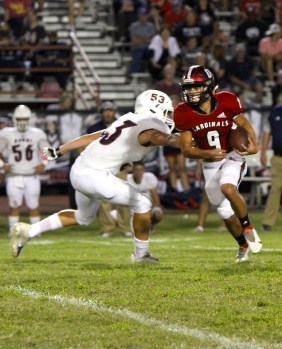 BRIDGE CITY – The Bridge City Cardinals beat the Hardin-Jefferson Hawks 21-20 in a District 11-4A Division II that went down to the wire at Ward Stadium Friday night.

The game was a high-stakes matchup for the Cardinals (3-3, 1-1), not only was it homecoming night, but their former head coach Dwayne Dubois was on the opponent’s sidelines as well.

Turnovers and missed opportunity were the themes of the game. On their second drive, the Cardinals lost a fumble on their opponent’s one-yard line. On the Cards’ next drive, Kyler Garlaska found the end zone off a screen pass that went for 54 yards- but it was called back due to a costly holding penalty.

After receiving the Cardinals’ punt, Hardin-Jefferson’s offense immediately coughed the ball up. Harrison Gauthier recovered for Bridge City. However, BC quarterback Ethan Oceguera threw a jump ball into the end zone which was intercepted to end the first quarter.

While the Hawks (1-5, 0-3) offense continued to sputter out, the Cardinals finally scored the game’s first touchdown halfway through the second quarter. Garlaska bounced a run outside, breaking free for a 74-yard house call to put Bridge City ahead 7-0.

The Cardinals’ strong defensive showing went on as Gauthier forced his second turnover of the night, intercepting the Hawks at their own 32-yard line. With the great field position, Oceguera hit Joey Murty for a 26-yard gain and set his team up in the red zone. JS Bearden followed it up by punching the ball across the goal line with a 6-yard touchdown rush.

Ahead 14-0 nearing halftime, Bridge City’s defense kept the pressure on. Bearden recovered a fumble, marking the Hawks’ third turnover in just the first half.

Both teams’ ball security was just as bad in the second half. Bridge City’s Rayburn Hebert intercepted an errant pass, but the Cardinals failed to score. Soon after, Hardin-Jefferson recovered a fumble inside the Cardinals’ 30-yard line. Tyler Fountain rushed 24 yards for a score, bringing the Hawks closer, 14-7.

On the Hawks’ next drive, they fumbled again and it was recovered by Bridge City’s Trey Hebert. The Cards’ offense stalled out though, giving the ball back to the Hawks with seven minutes left in the fourth quarter. After seven plays, Jacob Weldon rushed three yards to tie the game 14-14.

With the pressure mounting and less than five minutes to play, Ethan Oceguera led Bridge City on a thrilling drive downfield. Facing a third-and-thirteen, Oceguera launched a rocket straight into the hands of Joey Murty for a huge 40-yard gain. Oceguera then connected with Noah Broussard in the end zone for a 30-yard touchdown.

With the Cardinals ahead 21-14 and less than two minutes on the clock, Hardin-Jefferson needed a miracle. They nearly got one when Jacob Weldon returned the kickoff 78 yards for a score, bringing the Hawks within one point.

The Hawks initially kicked the extra point and it was blocked, but the PAT was replayed due to an offsides call against the Cardinals. With the game on the line, the Hawks elected to go for two. The rush attempt was blown up by Bridge City’s front seven, leaving the Cardinals on top, 21-20.

Oceguera felt great about the homecoming win. “Going out there against one of our old coaches, it’s always going to be a rivalry. But we stayed focused, got the job done, and I couldn’t be more proud of these guys.”

The Cardinals will hit the road next week to take on Silsbee while the Hawks will return home to face Hamshire-Fannett.