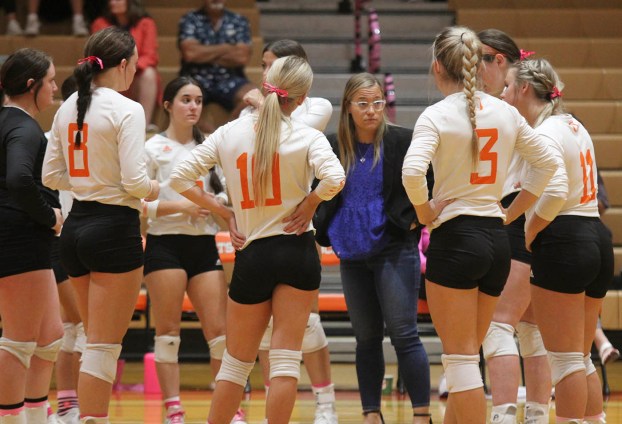 Van Wade/Orange Leader Orangefield coach Ashlee Broussard addresses the Lady Bobcats during a timeout in the sweep of Silsbee.

ORANGEFIELD – Starting off the second half of the District 22-4A volleyball campaign with some flair, the Orangefield Lady Bobcats took care of the Silsbee Lady Tigers in quick fashion Tuesday night at Bobcat Gym as they strolled to a convincing 25-9, 25-18, 25-13 victory.

The Lady Bobcats (24-8, 6-1) got it done against the Lady Tigers (1-6 in district) in numerous ways as they were clicking on all cylinders.

Orangefield picked up 31 kills while the Lady Tigers had just 15. The Lady Bobcat offense was set up well by the likes of Faith Burnette and Brianna Moore as they set up their teammates so well throughout the match.

The Lady Bobcats did a lot of their scoring off their own service game as they racked up 51 service points and seven aces while the Lady Tigers had 16 points and two aces.

Bailey Pate led the Lady Tigers with five points. Moore had four points and an ace. Hall had three points while Sadie Glaz had an ace.

Orangefield went on a 10-1 run in Game Three to snag a 19-8 cushion before closing out the match.

Bridge City chimes in at No. 5 in latest volleyball state rankings