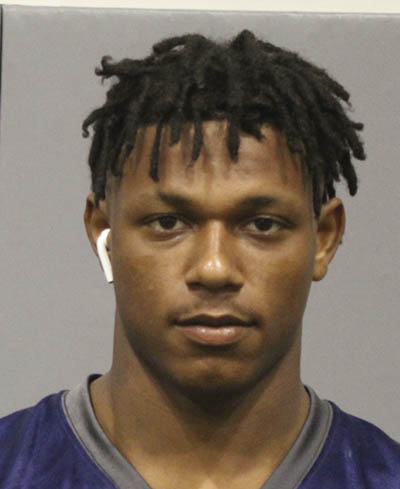 WEST ORANGE – The West Orange-Stark Mustangs took care of the Hardin-Jefferson Hawks 54-7 at Dan R. Hooks Stadium in West Orange Friday night in District 11-4A Division II action.. It was never in doubt for the Mustangs this game, putting up 54 points before the Hawks even scored.

Overall, the Mustangs (4-1, 2-0) out matched the Hawks (1-4, 0-2) in every part of the game. The defense held firm and the offense was able to pile on points every chance they got. Even after losing their starting quarterback Jayson Zeigler Jr. to an injury last week, Keyshwan Robinson took control of the offense and did a decent job throughout the night.

The Mustangs finished with 349 yards of total offense.

The win sets up a big battle for the Mustangs next week when they welcome in the Silsbee Tigers. Silsbee defeated Liberty 20-7 Friday.

The Mustang defense was a big reason they were able to get ahead and pile on the points all game long. The Hawks couldn’t reach 100 yards in total until mid-way through the fourth quarter. They finished with an even 100 yards when all of the dust was settled.The Mustangs had two interceptions and a good handful of fumble recoveries to stop any attempt the Hawks would make. They would have one drive deep into Mustang territory but that ended with a pick-six from Dakarian Judge, and another pick from Jadon Jones.

Offensively, Elijah Gales would be the leading rusher for the Mustangs on the night. With just 6 carries he mounted up 130 yards of rushing and a rushing touchdown, not to mention a big 60 yard punt return for a touchdown. Gales was able to easily break through the defense and get multiple big plays for the Mustangs.

After an opening stand from the defense, the young quarterback for the Mustangs took the team to the end zone on the first drive. Robinson opened up with a solid drive, getting a couple of decent screen passes off to Gales and Jailen Brown. Robinson would run it in from 30 yards out for the score. The Mustangs missed the PAT, but took a 6-0 lead with 10 minutes left in the first quarter.

Gales got the first carry of the drive and tooks advantage of good blocking for a big play. The Mustangs recovered a fumble to give the offense the ball at their own 26. Gales took a rush all the way to the house for a 74-yard touchdown. The two-point conversion would be good with a catch from Darren Anderson as the Mustangs led 14-0 with 1:41 left in the first quarter.

The Mustangs’ special teams stepped up for the next touchdown to start the second quarter. Gales hauled in a punt from the Mustang 40, weave through the blocks and took it all the way to the house for a 60-yard touchdown. The PAT went wide, making the score 20-0 with 11 minutes left in the first half.

The Mustang defense held the Hawks again, and even disrupted the punt to give the Mustang offense the ball inside the opposing 20. After a couple of runs, Gale would punch in the score from the 2. The PAT got blocked, making the score 26-0 Mustangs with 4:36 left in the first half.

The Mustangs kept pouring it on, with Robinson gettings involved in the scoring. Starting at their own 43, Gales would get things going with a big 38-yard run. Robinson would take the next run and punch it in from 15 yards out, on a sweep around the outside, making the score 33-0 Mustangs with 1:50 left in the first quarter. Robinson had 47 yards on the ground and completed 3-of-4 passes for 39 yards.

Dakarion Judge snagged an interception after the Hawks had a promising drive, and took it to the end zone for another score. All the way from the six-yard line, Judge would weave through the Hawks and take it all the way for a touchdown for 94 yardsgiving the Mustangs a 40-0 edge with 33 seconds left in the half.

The Mustangs keep the parade of scoring up in the second half with another quick touchdown thanks to the defense creating a fumble and recovering. Jamaal Shaw broke off on a 21-yard run to bring them inside the H-J 10. Shaw eventually punched through the final six yards for the touchdown, pushing it to 47-0 with 20 seconds left in the third quarter.

WO-S got some fresh legs in the backfield and scored again. After Judge broke a decent 10-yard run, the Mustangs brought in Isiah Thomas for the next run. Thomas easily broke free and scored from 26 yards out. Thomas finished with 60 yards on six carries.

The Hawks finally got on the board thanks to an interception from the defense. Caleb Chesire would jump a screen route and take the pass to the end zone from 44 yards out with eight minutes remaining.

Jacob Weldon was the one bright spot for the Hawks as the back had 70 yards on 14 carries.

H-J quarterback Brady Trotter was 0-for-7 with the two interceptions.

LITTLE CYPRESS – Defensive fans definitely got what they wanted at Battlin’ Bear Stadium Friday night and so did the... read more