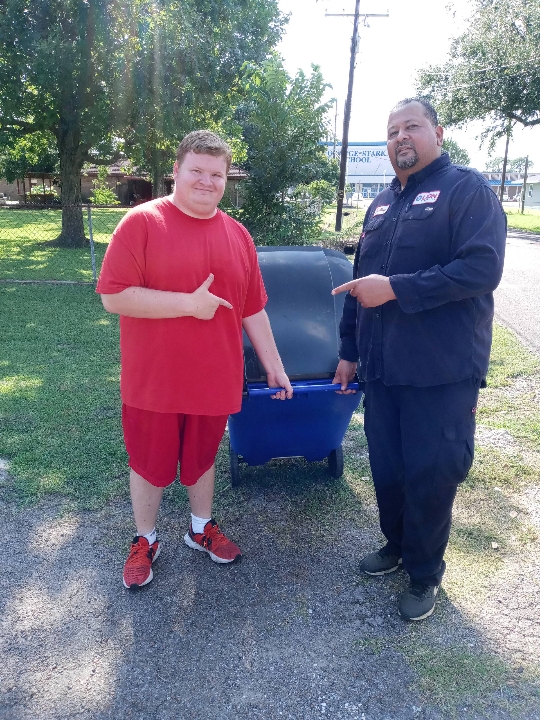 Changing the world one trash can at a time is exactly what Dylan McClelland Tywater and his friend Erick Guillory are doing. What started as a neighbor helping another neighbor find work, has grown into a business and a heartfelt friendship.

Erick with his wife, Tyeshia, along with children Trey, Ty’ Kendra, and KJ, live directly across the street from West Orange Stark High. Dylan, a 2017 graduate of Orangefield High, lives in the same neighborhood. Dylan loves to attend Mustang games and walk the streets listening to classic Rock.

“He was just the kid with the headphones,” said Erick when describing Dylan.

Dylan is the grandson of long time WOS coach Robert Tywater and wife Dorthy Tywater. Dylan was someone everyone in the neighborhood knew.

Erick recalls their beginnings by saying, “He was quiet and didn’t speak to strangers. One day I offered him a bottle of water. We talked, and it just grew from there.”

Erick and Dylan began to brainstorm on ways to increase Dylan’s $10 per week allowance.

Dylan was having a hard time finding work. On paper, he is considered autistic, but in person he is far from the label. With a highly intelligent vocabulary and a sense of humor to match, Erick felt it was important to show Dylan the same respect he would anyone else that was looking for employment, saying “The way society views him isn’t the way I do. I know he is capable of doing anything anyone else can do.”

The tag team came up with several ideas, including a lawn service and selling water bottles to Mustang fans on Friday night games. The best idea was a trash service to help the community. The two made up flyers and passed them around the neighborhood. They offer to pull trash can from each neighbor’s house on Thursday, bring it to the road for the following trash day, and also bring it back to the house the following day. On the first of every month Dylan and Erick collect $10 per house.

Dylan describes collecting the money by saying, “We come to collect like loan sharks!” The term is from a song Dylan listens to from the group “Riot” one of Dylan’s favorite Rock groups.

At the start, the two saw a small number of participates, but as the days and weeks went by the number of neighbors grew. They now cover two to three streets, with the hope to raise enough money to get Dylan a bike to cover more streets around the neighborhood. Dylan also wants to use his newfound fortune to fund one of his other passions, comic book collecting. He loves Manga comics, which are from Japan and read right to left.

In a world of political division and racial tension, it is good to see two people from opposite ends of the spectrum come together for a positive goal.

Erick is passionate saying, “People need to help their neighbor, it’s not about color or background, it is just about offering a helping hand.”

Dylan says it is awesome to work with Erick and loves his new job. His smile lights up the streets as he and Erick go from house to house pulling trash cans to the end of each driveway. He doesn’t have to be conformed to the labels of society nor should he. Just one conversation with Dylan and you can see his intellect is high and above the immaturity of those who did not want to employ him.

Dylan and Erick never let anything stop their goals. Turning a dirty job into something pure and fun. Dylan loves that other people’s trash has turned into his treasure. A treasure of purpose, joy, friendship and employment.