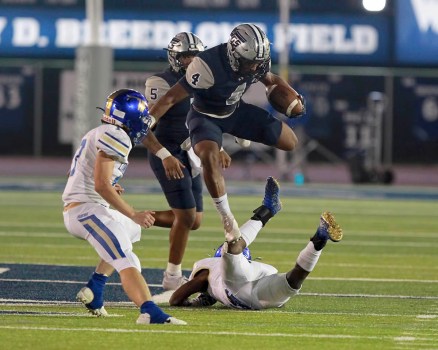 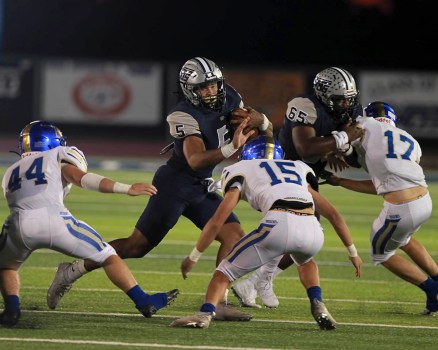 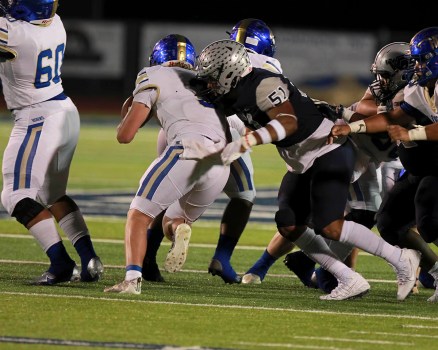 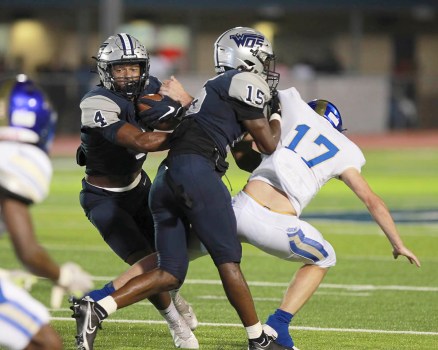 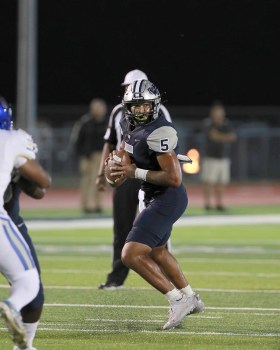 WEST ORANGE – They came close to getting a big shutout again, but the West Orange-Stark Mustangs settled for a 24-8 Homecoming victory over the Hamshire-Fannett Longhorns Friday night as they opened defense of their District 11-4A Division II title.

The Mustangs (3-1, 1-0) are on a quest for their 12th straight district title. The Longhorns (3-2, 0-1), battled hard, especially on defense, but the Mustangs were in control of the contest most of the way.

The Mustangs finished with 254 yards of total offense.

Quarterback Jayson Zeigler, Jr. rushed for 50 yards and two touchdowns on 14 carries and completed 3-of-11 passes for 72 yards before having to lead the game late in the third quarter due to a shoulder injury.

Mustang tailback Elijah Gales rushed for 70 yards on 10 carries and grabbed a Zeigler swing pass and took it 66 yards for a score.

The Mustangs limited the Longhorns to 186 total yards with 77 of it coming on H-F’s last drive of the night in which they scored.

H-F quarterback Kheagian Hegaman rushed for 77 yards and a touchdown on 21 carries and completed 3-of-11 passes for 69 yards.

Both defenses were outstanding in the first half, but it was the Mustangs that were a lot better as they limited the Longhorns to just 35 total yards in the first 24 minutes and the Mustangs found enough offense to be ahead 14-0 at intermission behind a pair of rushing touchdowns by Zeigler.

The Longhorns limited the Mustangs to 110 yards in the half as their defense held firm, thwarting three WO-S possessions deep in H-F territory.

After a scoreless first quarter the Mustangs were able to get excellent field position at the H-F 24 early in the second quarter. They found paydirt in three plays when Zeigler broke through the middle for a 20-yard touchdown burst. Kicker Cristan Quiteno Polio booted the extra-point to give the Mustangs a 7-0 edge with 8:46 in the half.

The Mustangs closed the half with a nine-play, 88-yard scoring march. Thanks to hard running by Gales and Zeigler, who teamed up for 58 yards on the ground and two personal foul penalties on the Longhorns WO-S found the end zone again when Zeigler scored on a one-yard keeper, pushing it to 14-0 with 0:28 in the half.

Gales had 49 yards on seven carries in the half, including three totes for 39 on the long drive, while Zeigler had 48 yards on 13 carries.

Heckaman had 28 yards on nine rushes for the Longhorns while Jordan Joiner had 16 yards on the ground.

The Mustangs made it 21-0 in a hurry to start the second half when Zeigler swung a pass to Gales on the right side and Gales outsprinted the Longhorn defense for a 66-yard touchdown on the second play of scrimmage in the third quarter.

WO-S chewed up 6:53 off the clock on a 15-play, 57-yard drive with all the yards coming on the ground and the Mustangs settled for a 28-yard Quiteno Polio field goal with 8:39 remaining.

The Longhorns punched one in late with a five-play, 82-yard drive. Heckaman, who had not completed a pass all night at that point, completed three straight passes that ate up 69 of the yards, including a 39-yard pass to D.J. Brown that got to the Mustang 4. Two plays later Heckaman scored on a one-yard keeper off right tackle and then he added the two-point conversion run with a sweep around left in to trim it to 24-8 with 0:19 left.

The Mustangs will venture to Sour Lake next week to face Hardin-Jefferson while the Longhorns return home to face Bridge City.