What Made Orange Great: Frances Ann Lutcher as Orange’s Benefactress 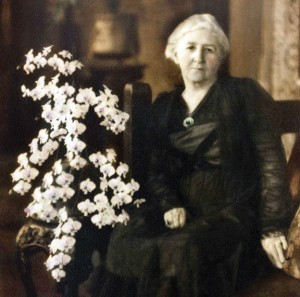 Courtesy photo As proud as she was of the church and hospital, Frances Ann Lutcher was even more proud to be known as “The Orchid Lady.”

The marriage of Henry J. Lutcher and Frances Ann Robinson in 1858 was to be a long and successful marriage. Lutcher was to become a wealthy timber baron and his wife Frances was a woman who used her wealth to benefit her community.

Lutcher heard of the vast forests of virgin pine and cypress in Texas and made a trip to survey the forests for himself. He saw potential and decided to move to Texas in 1877. By 1880 he had partnered with G. Biddell Moore and started the Lutcher and Moore Lumber Company. The company would grow to become one of the largest and most profitable in the nation.

In 1893 she and her daughters, Miriam Melissa and Carrie Luna traveled to the Chicago World’s Fair where she purchased three stained glass windows. One window depicted a man on a chair holding a Bible. Another was of Michael the Militant, and the third was the Angel Gabriel. The theme of the church would be planned around these three windows.

She purchased more stained glass at the Columbian Exposition in 1896. Stained glass was used to construct a 36 foot opalescent dome, the only one in the nation.

In 1902 Willis Carrier, a young engineer for the Buffalo Forge Company had invented what he called, “An apparatus for treating air”. He received a patent for his process in 1906. About this time Stuart H. Cramer developed a similar system which he called “Air Conditioning”. Carrier adopted the name for his system.

When Mrs. Lutcher heard about this system, she contacted Buffalo Forge and ordered a system for her church. The design of the church incorporated air conditioning. Windows were not designed to be opened.

The glass dome was covered with sheets of copper in the early 1940s due to wartime concerns. In the 1950s there were a few leaks. The leaks were repaired, and a new copper dome was installed.

The materials used and the quality of workmanship were so high that over time there has been little need for replacements. Only maintenance and occasional repairs have been needed.

Mrs. Lutcher created an endowment fund for upkeep of the church. Over time her family has added to the fund.

Since the church was a gift to Orange, Mrs. Lutcher kept the cost a closely guarded secret. She had each contractor submit his bill directly to her and she paid each bill personally. Legend tells us that Frances Ann destroyed the receipts and kept the cost to herself, not wanting to flaunt her wealth.

In 2018, an Orange Leader article was uncovered in the Eunice R. Benckenstein Library & Archive which read, “…the magnificent Lutcher Memorial Church, which has just recently been completed at a cost of $300,000…for ages to come it will stand as a memorial to the name of Lutcher, a name closely linked with the progress and prosperity of Orange.”

Mrs. Lutcher loved flowers and had greenhouses with many varieties. Her favorites were orchids. During WWI when troop trains passed through Orange, she would go to the train station and give each soldier an orchid. She became known as “The Orchid Lady.”

In her 80s, after years of concern about the number of men being injured in the sawmills in Orange, she decided a modern hospital was needed, so she started working on the design and construction of one for Orange.

The Frances Ann Lutcher Hospital was opened in 1921. It was considered one of the two best equipped hospitals in the nation. The hospital was a four story building with a frame of reinforced concrete with a red brick exterior. There would be rooms for 70 patients. Electric elevators were installed by the Otis Elevator Company. There were two operating rooms, the larger had skylights, which were standard in those days. The smaller operating room had the new No-Shado operating room light. This meant that surgery could be performed on cloudy days with little natural light or at night.

The rooms were plainly furnished, but restful and modern. The beds were made by the Simmons Company, the mattresses by the Sealy Mattress Company of Sugarland, Texas. All linens were marked “Frances Ann Lutcher. Furnishings were the same in all the private rooms and the wards.

Over the door to each room was a signal light and a button near each bed could be pressed by a patient needing assistance. Bedside lights could be turned off by either the patient or a nurse.

She installed a Hess Baby Incubator. A specially trained nurse was in charge of the nursery. There was a heated dressing table, a weighing scale, and anything else a newborn baby could need.

A Johnson System washed the air and then cooled or heated it as needed. Each room had a thermostat and humidistat. Each room could be separately ventilated.

Operating rooms were airtight in order to control the odor of either used as the anesthetic.  Operating tables were the best available made by the Scalon-Morris Company of Madison, Wisconsin. Floors and walls were made of white tile for easy and thorough cleaning.

A Scanlon-Morris Battery Sanitizer used high pressure and heated water for sterilization of surgical instruments. There was also a large utensil sterilizer that could be used to boil large pans and basins.

There were no sharp corners in the hospital, all the walls had rounded corners for ease of cleaning and sterilization. The hospital also had an electric sterilizing system to ensure that there was sterile water throughout the hospital.

In addition to the hospital chief of staff, there were six doctors from every branch of medicine, six graduate nurses and a trained technician in charge of all laboratories. All doctors in Orange had privileges at the hospital.

The hospital conducted a school with a three year course of study for nurses. There was a two story home on the south side of the hospital used as a residence for student nurses.

The Lutcher hospital was the only hospital in Orange until the Navy Hospital opened in 1942. In 1956 the Orange Memorial Hospital was built. Gradually use of the Lutcher Hospital faded away. The old hospital had served Orange for nearly 50 years by the time it closed.

Frances Ann Lutcher was an altruistic woman who shared her wealth with and cared for her community. She was always more interested in community service than personal recognition.

She died in New York City on October 21, 1924. She was returned to Orange and laid to rest in the Lutcher-Stark mausoleum in Evergreen Cemetery.