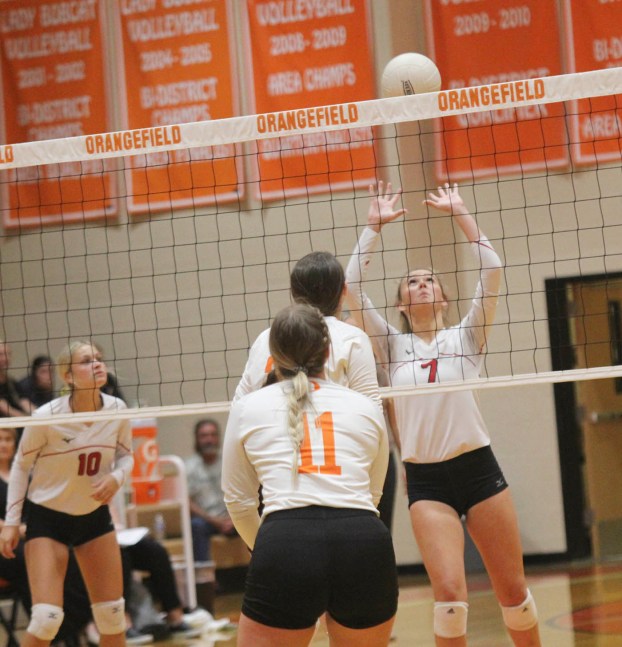 Van Wade/Orange Leader Bridge City’s Taryn Doiron sets the ball for one of her teammates as she had a bunch of assists in the Lady Cardinals sweep of Orangefield.

ORANGEFIELD – Using a balanced arsenal the Bridge City Lady Cardinals strolled past the Orangefield Lady Bobcats 25-18, 25-22, 25-17 to remain perfect in the early part of the District 22-4A season.

Bridge City, ranked No. 10 in the latest Class 4A state poll, had 35 kills, 45 points off their serve and seven aces.

Demi Carter had one of her strongest outing of the year at the net for the Lady Cardinals as she finished with a match-high 12 kills. Morgan Louvier and Harlee Tupper had seven kills apiece for Bridge City while Caryss Carpenter had four, Taryn Doiron three and Makenna Carey two.

Madison Greenway had a strong match for Orangefield (20-7, 1-1) as she racked up nine kills. Greenlea Oldham had five kills while Kylie Mouton had three and Mackenzie Haley, Faith Burnette and Kennedi Dubois each had two.

Greenway notched sreven points and five aces for the Lady Bobcats. Libby Thurman served up eight points and an ace. Burnette had four points and Brianna Moore had three.

The Lady Cardinals tallied 15 of the last 24 points to snag the win in Game One.

Orangefield looked completely in control of Game Two and darter out to a commanding 16-6 lead. The Lady Cardinals rallied to within 22-15 and then reeled off the game’s last 10 points to shell-shock the Lady Bobcats.

The Lady Bobcats will look to bounce back Friday when they visit Lumberton while the Lady Cardinals return home to face Silsbee.