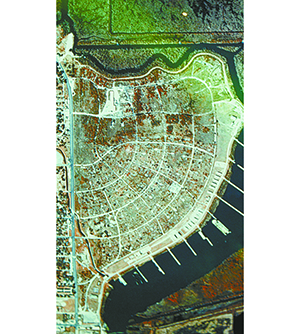 Leader file photo An aerial view of Riverside, a residential area designed to last 10 years but was in use for 30 years.

What Made Orange Great: Riverside and the people who lived there

Martin Dies was an Orange native who entered politics and became United States Congressman Martin Dies. Always concerned about his district that Orange was part of, he obtained what is probably the biggest boost the economy of Orange ever had. Congressman Dies obtained a contract for the Consolidated Steel facility in Orange, still under construction, to build 12 destroyers for the U.S. Navy.

The war in Europe had been going on for about a year and it was known that at some point America would join in the war. It happened earlier than expected when, on December 7, 1941, Japan attacked the U.S. Navy Base at Pearl Harbor. Shipbuilding in Orange would explode and so would the population.

With the shipbuilding that would be going on at the three shipyards in Orange there would be thousands of people coming into Orange. The biggest problem would be available housing in a town with a population of about 7,000.

The government came up the solution. They would buy land on the edge of the Sabine River and build 2,000 housing units that would be within walking distance of Consolidated and Levingston shipyards.

The land was swampy and covered with vegetation and trees, the first action would be to clear and level the land for the houses. The project was designed to be built fast and to only last about 10 years. It was for wartime usage and not much after that.

Sand was pumped in from the river and the water and sewer lines laid on the ground and covered up with more sand. The streets were made without steel reinforcement since steel was needed for war materials. The streets had curbs and gutters, but no drainage lines, rather the streets were sloped to the middle of the street and all streets were graded to drain into the river.

The houses were mostly duplexes and from one to three bedrooms. They had solid wooden floors and indoor plumbing along with stoves and refrigerators. The outer walls were covered with asbestos siding. The addition would be called “Riverside.”

Later “Riverside Addition” would be built consisting of another 2,500 units. They were not as well constructed with the outer walls being two layers of sheetrock covered with a coating of rubberized paint.

Riverside would be like a small town. There was a grocery store, barber and beauty shops, a fire station, and three elementary schools. It was pretty much self-contained.

People began to flood into Orange, thousands a month for a period of time. The population of Orange would swell from about 7,000 to over 60,000.

Many of the people who came to live in Riverside were from rural areas. Some were from areas that had no running water or flush toilets in their homes. Some had to be taught how to properly dispose of garage since where they had lived was very rural and kitchen scraps and other things could just be tossed in the yard and eaten by the dogs, hogs, chickens, and other animals that roamed loose around their house.

A good number of the men coming in to work in the shipyards could not read and write. The shipyards worked with the school district to conduct night classes for men who wanted to learn to read blueprints and other things necessary for their jobs in the shipyards.

Orange had the distinction of having the only shipyard on the Texas coast that built warships for WWII. The quality of the work was recognized by the Navy and the men who sailed on the ships. Levingston Shipbuilding was award the “E” Award for Excellence twice during the war period.

After the war ended, many families left Orange and returned to their former homes. Riverside Addition was razed. When the Navy selected Orange as the site for a base for the storage of surplus ships, 350 of the Riverside housed were removed for the land to be used for the base.

About 1500 of the Riverside houses remained occupied. The three schools remained open as did the grocery store and other shops in Riverside.

Eventually the fire station was closed and one by one the three schools closed. The government wanted to give up their ownership of the property. It could not be taken over by the City of Orange since nothing was built to code, it was after all only supposed to be a temporary place.

The “temporary place” went into private ownership. People who had come to Orange for wartime work stayed and found other jobs. As people moved out of Riverside, other people moved in. It became a good place for a young couple to live as they were starting life together. Most of Riverside consisted of nice, well kept homes owned by hard working people. Some people lived in Riverside for 30 years.

Ownership of Riverside changed two more times. People began to move out. The grocery store and other shops closed. The property overall was beginning to show its age. Streets, having no reinforcement steel, were breaking up and becoming almost impassable. In 1957, a tornado passed through Riverside and destroyed a number of homes. The last owner of Riverside was an investment group headquartered in Dallas. They decided the property was no longer profitable. They asked the last residents to move out and began to sell off and tear down the houses.

The property that was designed to last about 10 years lasted over 30. Some of the houses sold were relocated to other parts of Orange. There may still be a few occupied. They are recognizable, they are unique.