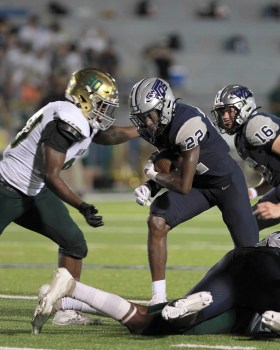 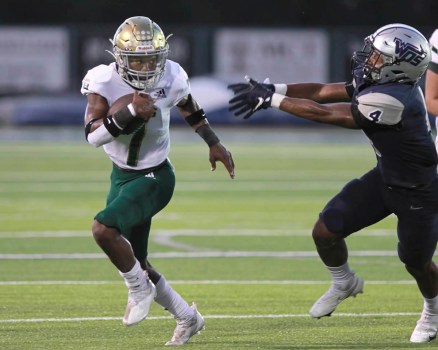 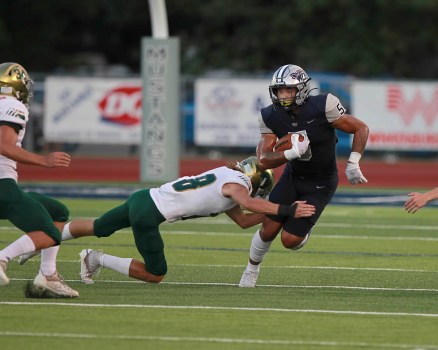 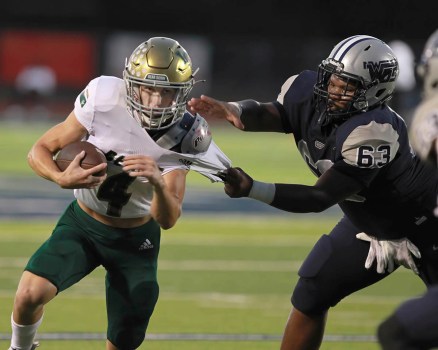 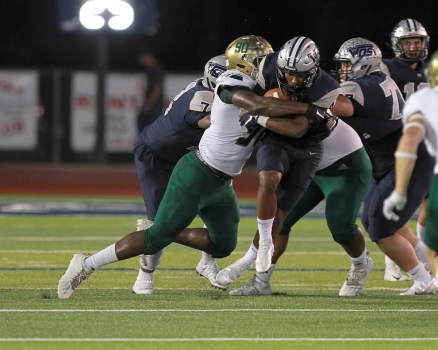 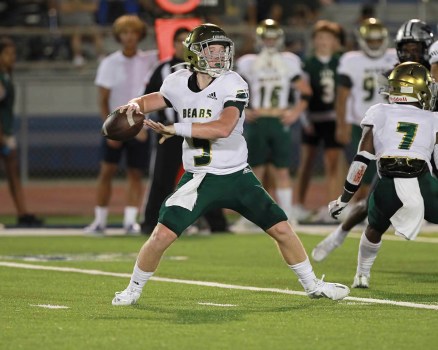 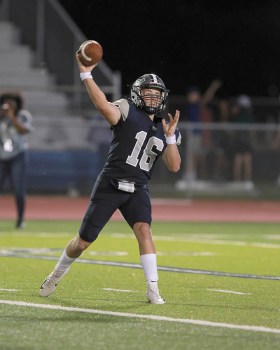 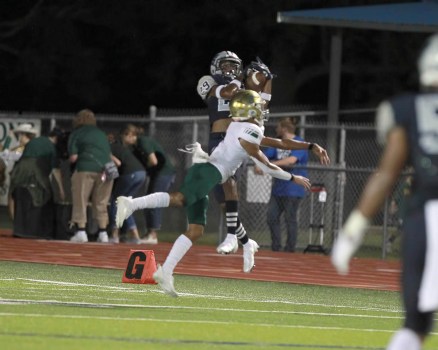 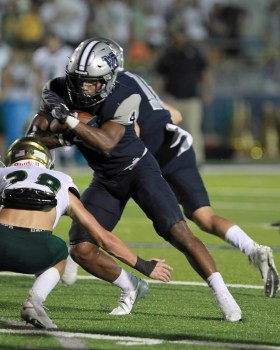 WEST ORANGE – After dominating the first half, the West Orange-Stark Mustangs zipped to a 39-20 victory over the Little Cypress-Mauriceville Battlin’ Bears to take the Orange Bowl at Hooks Stadium Friday night.

The Mustangs (1-1) controlled the first half most of the way and then held off a surge by the scrappy Bears (1-1) in the second half to nail down the win.

The Mustangs racked up 422 yards of total offense as they spread the wealth around.

They rushed the ball 47 times for 252 yards while quarterback Landon Heath completed 9-of-19 passes for 170 yards.

Mustang tailback Jamaal Shaw ran for 105 yards on 11 carries while backfield mate Elijah Gales had 85 yards on 14 totes. Jayson Zeigler, Jr. had five catches for 67 yards and 34 more on the ground.

LC-M running back Da’Marion Morris had an electrifying night on the ground. He tore through the Mustang defense for 162 yards on 16 carries. He scored three touchdowns against Hamshire-Fannett last week.

LC-M quarterback Ashton Landry rushed for 60 yards on nine carries and completed 9-of-21 passes for 54 yards as LC-M finished with 275 total yards after managing just 74 in the first half.

After both teams swapped scores on their first series, the Mustangs controlled the rest of the first half to lead 27-7 going into intermission.

The Mustangs outgained the Bears 258-74 in the half.

The Mustangs went up 7-0 when Heath teamed up with Jadon Jones on a 66-yard touchdown strike down the left side. Elijah Gales booted the extra-point as WO-S snared a 7-0 lead with 10:30 in the first quarter to cap off the four-play, 80-yard drive.

Heath completed 5-of-11 passes for 93 yards in the first half.

The Bears countered nicely with a 10-play, 65-yard drive to tie things up.

Morris, who had 55 yards on seven carries in the half, had a huge 25-yard scamper to the Mustang 15. The Mustangs got called for pass interference in the end zone as the Bears faced a fourth-and-6 from the 11. Getting the ball at the Mustang 2, Landry scored, going two yards off left tackle. Robbie Wedel booted the extra-point and the game was tied at 7-7 with 6:20 in the first quarter.

WO-S held the Bears to just nine more yards the rest of the half.

The Mustangs went up early in the second quarter with a nifty seven-play, 53-yard drive.

Ziegler, who had 27 yards on five carries in the half, broke loose for a 14-yard gain and Shaw, who had 89 yards on nine carries in the half, busted loose on a fourth-and-1 play 22 yards all the way down to the Bear 8. Two plays later Ziegler cruised straight up the middle for a nine-yard scoring dart on the first play of the second quarter to make it 14-7.

The Mustangs, behind their powerful offensive line, bruised their way 74 yards on 14 plays to go up by two scores. Shaw had a 24-yard jaunt up the middle that got to the Bear 41. Facing a fourth-and-6 from the Bear 28, Heath tossed one up to Darren Anderson, who outleaped a Bear for a superb 20-yard grab along the right side at the LC-M 8. Two plays later, Gales, who rushed for 53 yards on 10 totes in the half, broke loose for a six-yard touchdown. The extra-point failed but the Mustangs led 20-7 with 5:02 in the half.

Anderson was a thorn in the Bears’ side on LC-M’s next series as well when he stepped in front of a Landry pass and took it 46 yards for a touchdown, making it 27-7 with 4:04 in the half.

The Bears fumbled the ensuing kickoff but the Mustangs couldn’t quite capitalize.

Landry completed 2-of-10 passes for 23 yards in the first half with Morris hauling in one of them for 15 yards.

LC-M didn’t go down without a fight.

The Bears took their second series of the second half and zipped 79 yards to paydirt in six plays.

Morris cut loose on a 44-yard dart all the way to the Mustang 35. Landry hit receiver Dean Reynolds with a 17-yard strike that got to the WO-S 15. Two plays later Morris cut up the middle for a 14-yard touchdown gallop to make it 27-14 with 7:25 in the third.

The Mustangs answered late in the third and early fourth when they went on a 13-play, 84-yard drive that chewed up 5:13 off the clock.

The biggest play of the series was when Heath found Zeigler over the middle for a 47-yard gain that went all the way to the Bear 10 on a third-and-18 play.

Three plays later Gales found the end zone, going four yards up the middle to push it back to 33-14 with 11:07 remaining.

The Bears had a quick answer though as they navigated 63 yards in five plays on their next series thanks to Landry’s legs. Facing a fourth-and-9, Landry found a crease and zipped up the middle for a 41-yard keeper for the score to trim it to 33-20 with 9:09 remaining.

The Mustangs iced it on their next drive as they marched 65 yards in nine plays.

Gales sealed it with a gashing 20-yard sprint up the middle with 4:29 left.

The Mustangs will be trying to find an opponent next week. They were suppose to play Jasper but the Jasper ISD closed their schools down for two weeks due to Covid protocols. The Bears will venture to Katy for some Thursday night football when they take on Katy Jordan.