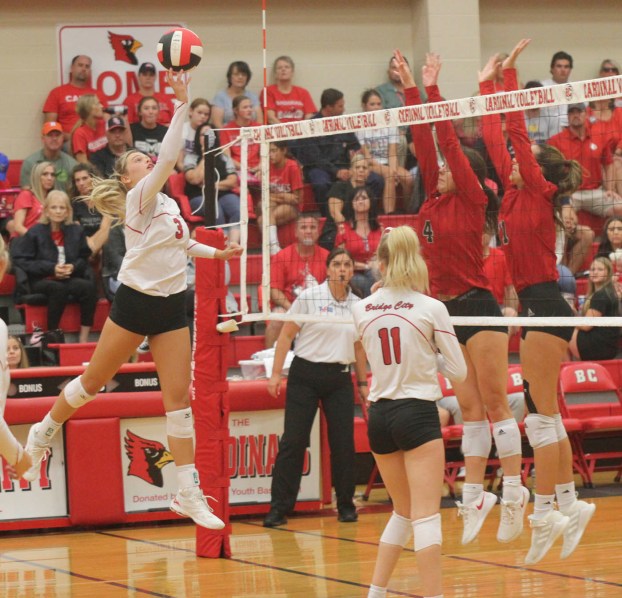 BRIDGE CITY – Two of Class 4A Region III’s top volleyball teams squared off at Cardinal Gym Tuesday night and it was the Huffman Lady Falcons that got the best of the Bridge City Lady Cardinals again 25-20, 25-18, 30-28 in front of a lively crowd.

Huffman has made it to at least the 4A Region III semifinals the last five seasons.

The Lady Cardinals battled hard but could never quite overcome the awesome service game and defense of the Falcons.

Huffman picked up 45 points off its service game, including 14 aces. The Lady Cardinals got 35 points off their serve and 12 aces.

The Lady Falcons collected 34 kills on the night while the Lady Cardinals had 29.

Kristin Kruger had a match-high 13 kills for the Lady Falcons. McKenzie Anderson had eight kills while Brooke Guerrero had six and Erin Prvenkar had four.

It was Prvenkar’s service game that disrupted Bridge City as she notched 12 points and a whopping eight aces.

Huffman jumped out to a 13-7 edge in Game One but the Lady Cardinals fought back to get to within 15-14. The Lady Falcons took control by running away with the next seven points to go up 22-14.

The Lady Cardinals trailed much of Game Two but rallied back to tie things up at 13-13. Huffman went on a couple of mini runs and went on a 12-5 jaunt to take the game.

The two squads went back and forth with the lead. The Lady Cardinals had the lead three times after that but couldn’t close it. Huffman tied it back up at 28-28 behind a Kruger kill and then got a kill apiece from Anderson and Kruger to close out the match.

Lady Cardinals chime in at No. 7 in Class 4A state volleyball poll

The Bridge City Lady Cardinals find themselves ranked No. 7 in the Class 4A state ranking by the Texas High... read more