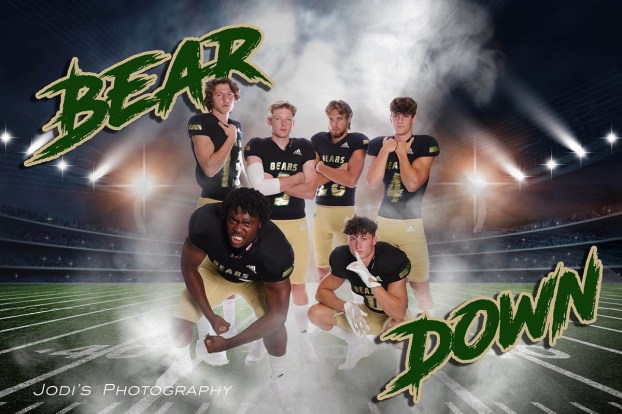 FANNETT – The Little Cypress – Mauriceville Battlin’ Bears beat the Hamshire-Fannett Longhorns 26-6 in Hamshire Friday night. Friday night lights are finally back with this hot season opener for the Bears, who nailed down the first win for new head coach Eric Peevey.

The game was called early in the fourth quarter due to nasty weather after it already had been delayed in the first half.

There were a couple of stand out players for the Bears (1-0) on the offensive side of the ball. Quarterback Ashton Landry was the focal point for this offense. He would rush for 84 yards and pass for 78 on the night. Landry was under pressure most of the time, but he was able to scramble and avoid negative plays. The other standout for the offense was running back Da’Marion Morris.

Morris finished rushing for 50 yards on nine rushes and had a reception for 18 yards, but where he made the biggest impact was in the red zone. Morris accounted for three of the Bears’ touchdowns this game. Morris is a threat, and he showed the Longhorns’ defense why this game.

For the Longhorns (0-1), there were a couple players who performed well. Quarterback Kheagian Heckeman would air out the ball this game with 31 passes. Heckeman would go 16-for-31 in the air with 122 yards, and also lead the team in rushing with 74 yards on the ground. His main target was Jordan Denson at wide out. Denson collected seven catches for 59 yards on the night.

Neither defense had an amazing night, but Nicholas Granger for the Bears had one play that would launch the Bears farther into the lead. Davis busted through the line and forced a fumble out of Heckeman, and scooped the ball and scored from 50 plus yards out. Davis was able to stay alert and took advantage of the Longhorns miscue.

The Bears came out ahead in the first half with two touchdowns and held the Longhorns to no points. The Bears struggled getting the ball moving early in the first quarter but quarterback Ashton Landry started to heat up and took control of the offense. He utilized the run-option offense well.

LC-M got on the board first thanks to Morris taking care of the yards on the drive. First, an 18-yard pass from Landry to Morris set up the Bears for a strike after starting on the 50. Morris would run the ball the next play and took it all the way in for a 37-yard touchdown after muscling his way through a pile of Longhorn defenders. The Bears made the PAT to go up 7-0 with 3:39 left in the first quarter.

Both teams would have to take a 45-minute break thanks to a thunder storm overhead. They would resume the game and the Bears took the chance to get more points on the board.

The Bears extended their lead with another Morris touchdown late into the second quarter. Landry took care of most of the carries on the drive, using the option to keep the defense on their back foot. He rushed for 53 yards and tossed a quick 14-yard pass on the drive, and Morris would punch it in from four yards out. The PAT went wide, making the score 13-0 Bears with just two minutes left in the half.

The Longhorns finally had a good drive going midway through the third quarter, but the Bears defense put a stop to it. Not only did Granger force a fumble, he scooped it up and scored from 50-plus yards out for the touchdown. The Battlin’ Bear defense showed up big when it mattered and put a dagger into the Longhorns going up three scores. After the PAT went in, the Bears led 20-0 with 4:59 left in the third quarter.

The Battlin’ Bears find another touchdown as the third quarter was winding down. Morris and Landry would take care of the rushes on the drive, pushing it down the field and getting at least five yards a carry between them. Morris punched in his third touchdown of the night from nine yards out. The Bears went for two but come up short, making the score 26-0 with 32 seconds left in the third quarter.

The Longhorns finally struck back in the first minute of the fourth quarter. Heckerman took control of the march and began an attempt at a fourth quarter comeback. Heckerman found Colin Dorsey for a 10-yard pass to start things off. Next he tucked the ball, found a hole and took off for a 44-yard touchdown run. The PAT got blocked, making the score 26-6 with 11:04 left to play in the game.

The Bears finished with 215 total yards while the Longhorns had 226.

Another delay cut this game short right after the last Longhorn score. A disappointing end to the season opener, but the Bears started to show their potential for this season behind their new head coach.

The game was more than just the season opener for the Bears, it was the debut for Peevey as the head coach. Coach Peevey implements the run-option spread style of offense, and it worked well tonight utilizing the speed around the edges for the offense. There are a few things the offense could straighten up, like pass protection, but the team is looking to put together a nice throughout the 2021 season.

The Bears will venture to West Orange-Stark next week to face the Mustangs.

Cardinals stymie Buna to give McGuire first win at BC

By Keagan Smith Orange Leader BUNA – The Bridge City Cardinals opened their 2021 football season with a bang on... read more