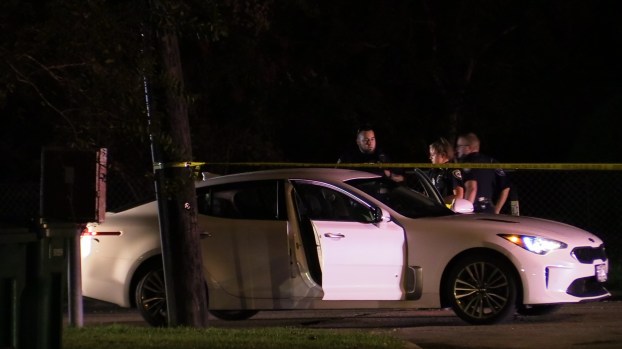 EJ Williams/Orange Leader Police investigate a shooting where a man was shot in the head after his vehicle was shot at Thursday night.

One sister is left dead after an argument on Thursday in Roselawn and approximately eight hours later another shooting is reported in the east side of Orange.

Orange Police officers responded to a shooting at 12:23 p.m. on Thursday on Circle D in the Roselawn area.

Officers found Mykeisha Young, 29, laying on her back in the living room suffering from a gunshot to her head or neck area, according to a police report.

Two sisters were home with their mother when the sisters began arguing, resulting in one of them being shot, according to a press release.

The incident is currently still under investigation and no charges have been filed at this time.

“We are waiting until we have more information,” Detective Captain Robert Enmon said.

Detectives are investigating how the gun was introduced into the fight, resulting in the death.

At 8:52 p.m., officers were dispatched to the area of 6th and John in Orange in reference to a shooting.

A man reported being shot in the head while driving.

“He is very fortunate to be alive, and walking and talking,” Enmon said.

The man’s vehicle was shot at as he drove down the street and was struck in the back of the head. He was taken to the hospital where the bullet was removed from under the skin.

“He did not receive any major damages to his skull,” Enmon said. “He was extremely fortunate.”

At this time, the police are asking the public for any information they may have concerning the incident. If anyone has any information regarding this incident, contact the Orange Police Department Detective Division at 409-883-1095.