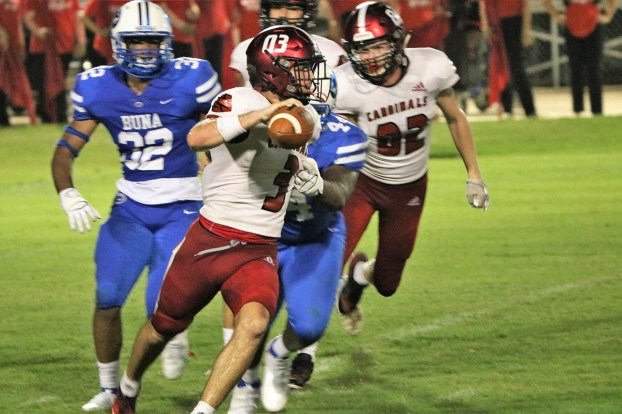 Cardinals stymie Buna to give McGuire first win at BC

BUNA – The Bridge City Cardinals opened their 2021 football season with a bang on Friday night, defeating the Buna Cougars on the road 27-14 for their first win of the new year and a great first win for first-year head coach Cody McGuire.

Buna struck early within the first minute of the game. Thanks to a great kickoff return and a quick penalty by their opponent, the Cougars began their drive from nearly midfield.

A 22-yard rush from quarterback Dylan Graffagnino took them into Bridge City territory, and Graffagnino later delivered a 23-yard dime to Logan Moss for the first touchdown of the season. There was still some rust to shake off though as Buna missed the extra point, leaving them with a 6-0 lead.

The Cougars coughed the ball up themselves though- Graffagnino threw a ball into the end zone which was picked off by BC’s Gavin Garrett. The Cardinals couldn’t make anything happen, and the Cougars took over once again. Graffagnino carried the ball six times for 47 yards and capped it off with a rushing touchdown, and the Cougars attempted a two-point conversion to make it a 14-0 ballgame.

The Cardinals (1-0) offense got moving to start the second quarter. A drive from their own 30 was capped off by a 16-yard rushing score by Oceguera to put his team on the scoreboard. The Cardinals would go on to score again two plays later, this time on a long interception return by Rayburn Hebert.

Despite an interception thrown by Oceguera, neither team would score in the remainder of the first half. Heading into the second half the scoreboard remained tied at 14-14.

Both offenses struggled to start the third quarter, but Bridge City capitalized with their second pick-six of the night; this time a 56-yard return from Braylen Collins. Although they came up short on a two-point conversion, the Cardinals took their first lead of the game, 20-14.

A clutch stop by the Cardinals defense put the ball back in Oceguera’s hands. This time, he led a long drive down the field with a 15-yard scramble and a 44-yard pass downfield to an open Joey Murty. As the fourth quarter began, running back JS Bearden finished the drive off with a 10-yard touchdown rush and solidified Bridge City’s lead 27-14.

Buna attempted to mount a comeback with six minutes remaining, but a costly fumble prevented them from converting a crucial third down. With the pressure mounting, the Cougars offense couldn’t find any consistency- and Gavin Garrett sealed the win for the Cardinals when he intercepted his second pass of the night.

While the action was a non-conference matchup, Bridge City still has to feel great about opening their year with a win on the road. Led by McGuire, the Cardinals defense made a huge impact tonight and will look to ride this wave against Tarkington next week.

Buna falls to 0-1 on the year and will face Hemphill next Friday.

ORANGEFIELD – Physically man-handling Anahuac in the trenches on both sides of the ball, the Orangefield Bobcats opened their 2021... read more