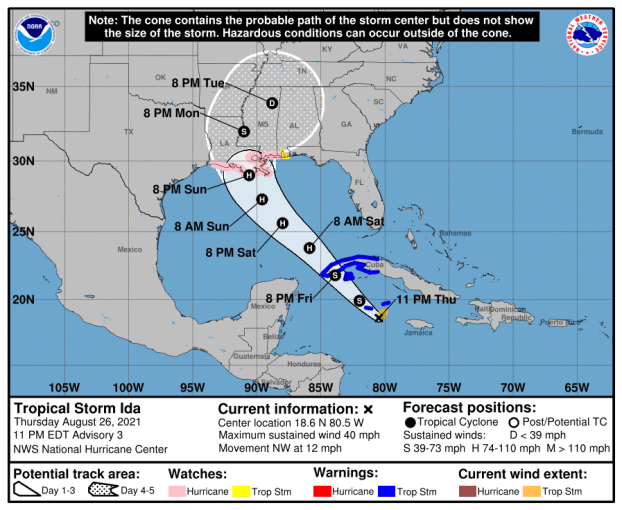 The National Hurricane Center has issued a Hurricane Watch for Cameron, LA eastward to the Mississippi/Alabama state line.

A Storm Surge Watch has been issued from Sabine Pass, TX eastward to the Alabama/Florida state line.
Tropical Storm Ida is expected to move into the southern Gulf of Mexico late Friday and become a hurricane. As it moves over very warm waters in the central Gulf, it will likely strengthen to a major (category 3 or stronger hurricane) before landfall on the Louisiana coast, most likely between Morgan City and New Orleans. The timing of landfall will be between Sunday afternoon and late Sunday night. An earlier landfall may help it not strengthen as much, a later landfall means it could strengthen even more.
Deadly storm surge, damaging hurricane force winds, heavy rain and tornadoes are all expected with Ida, mainly along and east of where it makes landfall in Louisiana.
You Might Like