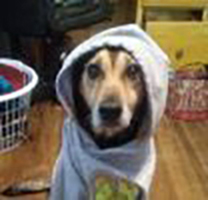 OP-ED: Story Over a Cup: The Golden Dogs

Life at Castle Cole has been a little bit uneasy of late. It has nothing to do with the plans to dig the moat and add the gators. Though, I must thank the county for digging my ditches deep enough to house gators. It is making the next steps all the easier.

(That is not sarcasm. I genuinely want to thank the guys who work on the ditches in my neighborhood, the flooding problem has improved a lot. You guys only receive attention when things go south, I think you need a big thank you for the things going right. Thank you)

Well, that is not a big thing because apparently the wife has a thing about gators. I am wearing her down on the vat of boiling oil for when salesmen visit.

This concerned our oldest dog, Jada.

She was having trouble standing and had developed a lump on one of her teats.

To say we were freaking, would be an understatement. Now, a little back story about Jada. She, we assume, was born in July of 2006. I say assume because she was a stray.

We found her between the metal security doors and the glass doors of a convenience store. There was no way for her to have made her way there by herself, so I have assumed she was dumped there.

I hope the person who did it is stuck in a DMV line as we speak.

I brought her home. The wife was not amused. We had just lost a black lab puppy to parvo, and the wife was not the slightest bit keen about getting this scrawny little puppy.

Jada struggles out of my arms and under the wife’s car.

My wife was the only one who could coax her out.

She relented (and named Jada, after Jada Pinkett Smith I assume), on the caveat she was an outside dog, while Foxy and Max were inside dogs.

That night, Jada was under our window howling up a storm.

So, the second night it was agreed that she could sleep inside, but in the living room.

By the third, the bedroom, but not the bed.

After that, she has slept on our bed ever since.

So, the idea after a dozen years of her not being there anymore was not comforting to either of us.

Off to Dr. Dunn and the folks at Cypress Animal Clinic. A great group of people, Dr. Dunn has been the vet to almost every one of my dogs.

Of course, the rain would start the second we got in the car. And steadily got worse as we neared the vet.

Then it was removing a dog from the car while the rain was pouring. Never a good thing.

She walked around, and then fidgeted on the scale.

The rest of the visit went pretty well. We were told the teat would need to be removed.

Then my wife asked if she was in good enough health to survive the surgery.

I will have to admit, Dr. Dunn gave an answer that was, well golden.

“She is in great health for someone who is 90.”

No longer was she Jada, partner in crime. Jada, scourge to all cheese. Jada, the girl who whines all the time…

She was now the dog version of Sophia from the Golden Girls.

I now look at her and whenever she has Bill and Roswell near her, I can almost picture her saying..

“Picture it, the living room, 2009. There I was a young female pup, and who would walk by, but the mailman…”

Michael Cole is a syndicated columnist that when he is not writing, he, with Jada’s assistance, is plotting global domination. You can follow him at www.storyoveracup.com

OP-ED: Why Americans should care about Afghanistan

It’s 4 a.m. in Charlotte, North Carolina, and 12:30 p.m. in Kabul, Afghanistan. After 72-hours of communication between several Veterans... read more