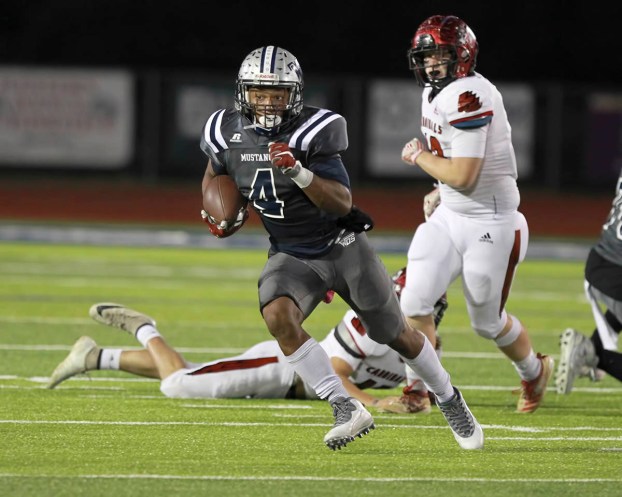 WEST ORANGE – Everyone is jacked up again at West Orange-Stark as their fans are anticipating another grand season from the Mustangs on the field again this year.

For the winningest program in the state all-time by percentage, it has always been about traditions, and oh yes, streaks.

The Mustangs would love to continue those trends under the leadership of longtime head coach Cornel Thompson.

WO-S has captured 10 straight district championships as they are on a quest for No. 11 and will be looking for their 10th trip to at least the Class 4A Region III Finals in the last 11 seasons.

And yes, there was those four straight trips to the Class 4A Division II State Championship games in which the Mustangs nailed down two state crowns in 2015-16.

Now the Mustangs, who went 8-1 last season and a perfect 6-0 in District 11-4A Division II play, will look to continue the district winning streak and stretch their campaign way into the postseason.

“We have a great tradition here and we want to keep it going, when you start a new season, you don’t worry about streaks and such, it’s that next opponent in front of you that you concentrate on,” said Thompson. “We’ve got a chance to be pretty good but there are a lot of areas we must improve on. Usually in the past we’ve had to have kids step up on offense but this year, which is rare, we need some young guys to step up on defense. The kids have had a great turnout throughout the summer, so we’re ready to get this thing rolling.”

The Mustangs return nine starters on offense and five on defense.

WO-S will need to replace standout quarterback Jerren Terrell, who passed for 1,497 yards with 19 touchdowns and just three interceptions.

As of right now, the Mustangs are looking for the likes of Dakarion Judge, Keyshawn Robinson and Chris Jones to step in as they will get looks in the scrimmages.

In the backfield, the Mustangs will lean on a pair of experienced and versatile backs in the All-District pair in Elijah Gales and Jamaal Shaw.

Gales, a senior, has been instrumental in the Mustang running game ever since he was a freshman. Last season he averaged a whopping 10.1 yards a carry in rushing for 576 yards on just 57 totes and seven TDs.

Shaw, a junior, zipped for 419 yards on 46 carries with four TDs and averaged 9.1 yards a tote. Isiah Thomas will see his share of totes as well.

“We’re looking for Gales and Shaw to make huge contributions and they are both capable,” said Thompson. “Both will be major contributors on defense too, so they are a nice 1-2 punch. We plan the run the ball much more this season than any other we’ve had the last several seasons.”

The Mustangs have some quality receivers to get the ball to as well in senior Jadon Jones, senior Dontrey McClain, junior Jailen Brown, junior Darren Anderson and senior tight end Carmello Jones along with Clayton Whatley.

“We’ve got some guys there with pretty good hands,” said Thompson. “If we can get the ball to them, they’re capable of making some big plays down the field.”

The Mustangs have a tremendous strength in their offensive line, which is almost entirely intact.

It will be paced by All-State senior Demetrius Hunter, who has verbally committed to the University of Oklahoma, along with All-District senior tackle Bryson Jordan, Andrew Wilson, Evan Gray and Davin Heard. Ja’Kalen Jenkins and Issac Morris will also look to make an impact.

“Right now, our offensive line is the strength of this football team,” said Thompson. “I think we have some guys in there with solid experience that can pave the way for us.”

WO-S has several key defenders returning as well and will look for a few young players to step into big roles as well after they allowed just a mere 143.3 yards a game last season.

The defensive line should be sparked by McClain, who made All-District after 72 stops last season, at defensive end along with Brown.

Gales will look to make his mark at linebacker again after an All-District campaign along with senior Quinton Walker. Whatley, Isiah Thomas, Deshawn Brunson, Jalen Lewis, D.J. Warren will all be vying for time at linebacker too.

Jadon Jones, a All-District performer at safety and three-year starter, will be counted on to spark what will be a youthful Mustang secondary.

Looking to make their mark in the secondary are Judge, Robinson, Shaw, Anderson and Marquarious Garrett.

“Defensively, we have a lot of question marks, but the kids are picking things up pretty well in practices,” said Thompson. “Everyone will be getting a lot of looks in the scrimmages. We are a work in progress but we see plenty of potential.”

As usual, the Mustangs have a formidable non-district campaign set up as they have dates with Nederland, LC-M, Newton and Jasper.

“We always take pride in playing a stiff non-district schedules, it only makes you a better football team when district starts,” said Thompson. “We missed our dates with Nederland and Jasper last year due to the pandemic and storms. It’s no easy task when you go to Nederland because those Bulldogs are always well-prepared. It’s the opener, and that will show us where we are at early. LC-M is always a great game that means so much to both communities. Newton is always one of the best programs I the state at the 3A level. Jasper, what more can you say, that has always been a great game that both schools look forward too because we’ve played so much over the years.”

It will be no easy chore in District 11-4A Division II as each team looks to be better and deeper this season.

“A goal every year for us is to go get that district title but we’ve got to go through some tough competition in this league,” said Thompson. “Everybody seems to have a lot of key people back on each team and you know they would love to knock us off. Silsbee has a bunch of skill people back and they always seem to match up with us well. Orangefield, those kids battle week-in and week-out and they love to compete, that’s their trademark. Hamshire-Fannett has some tremendous talent back, especially on offense. Hardin-Jefferson is always ready to battle. Liberty has a lot of talent and were close in so many games last year. Bridge City has a lot of key guys back and will be fired up under a new regime. It’s going to be a tough district, so you better bring your ‘A Game’ every time.”

Thompson likes the group of kids the staff gets to work with again.

“District is still a long ways off, so the goal right now is to strive to get better each and every week,” said Thompson. “We really think this is a good group to coach up and we’re all excited to see what can be accomplished again.”

Bobcats’ Ashworth, Babineaux ready to shine on both sides of the ball