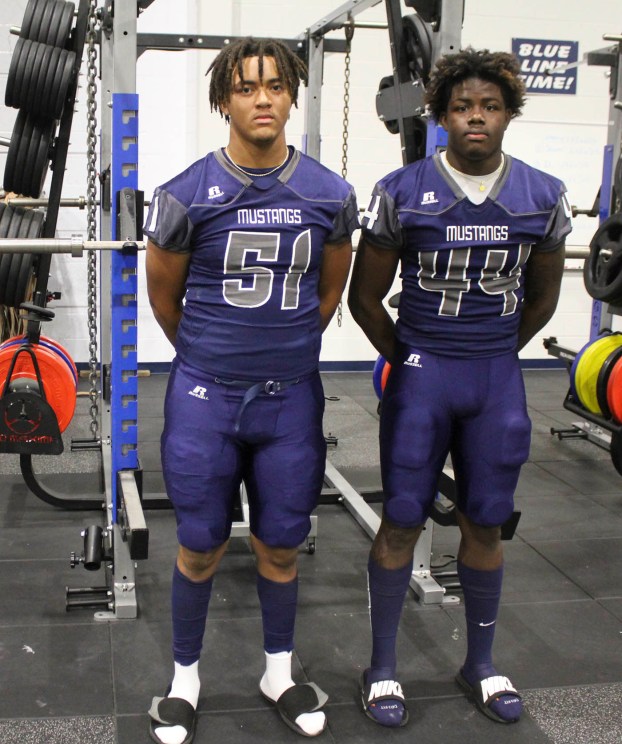 Van Wade/Orange Leader West Orange-Stark seniors Bryson Jordan (51) and Carmello Jones (44) are looking to shine on both sides of the ball for the Mustangs.

With the highest winning percentage of any high school football team in the state of Texas, the West Orange-Stark Mustangs have a tradition of excellence to uphold. The 2021 season is coming up shortly, and the Mustangs are geared up to make another postseason run.

Jordan says his individual goals are to play harder than last year and improve his play even more. For Jones, he wants to improve on both sides of the ball and play hard on every down.

Locking in for every possession is definitely a trend for the Mustangs. Jordan says that as a team the goal is to “lock in all together, it’ll make us a heck of a team. We’ve got great guys, a great team and we’re stacked everywhere. We want the young guys stepping up too, but we’ve got great leadership too.”

Jordan added that he feels “the offense will be the key this year. On defense we’re going to do a lot of growing, but Coach  (Cornel) Thompson can handle that.”

For Jones, he says the team goal is simple. “We’re really good, but we’ve got to communicate better. If we get that communication, we’ll be a great team.”

The team has the potential to really take their game to the next level, and the seniors are prepared to step up as leaders to make it happen. Jordan talked about filling that leadership role- “To me, it’s an honor to be a leader at West Orange-Stark, the winningest team in the state of Texas. That sounds great to me. I take that very seriously.”

Jones also feels a strong tie to being a leader. “Just like Bryson said, it’s really great to be a leader. Everyone’s looking up to you and counting on you, expecting you to do something good.”

As seniors, both players have spent plenty of time wearing the blue and silver. Jones said that his favorite part of playing for the Mustangs has been the coaching. “They really get onto us, not just preparing us for football but also preparing us for life.”

Jordan says he enjoys being a part of such a storied program- “sharing the field with my teammates and just going out to compete is great.”

The Mustangs are ready to get the season rolling, hopefully without any COVID-related complications this season. With a ‘normal’ football season approaching, Jordan says “It means a lot to have more support, more fans in the stands than last year.”

Jordan looks forward to a normal senior year too. “It means a lot because last year just felt like turmoil. This year we can enjoy it with our fans, our coaches, and our community. It’s a really great feeling,” he told us.

West Orange-Stark is always one of the biggest names in high school football; this year should be no different. They have some incredible talent on the roster, and their revered coach Cornel Thompson is returning to run it back again. As always, the Mustangs will be out to go all the way and compete for yet another state championship.

WEST ORANGE – Everyone is jacked up again at West Orange-Stark as their fans are anticipating another grand season from... read more