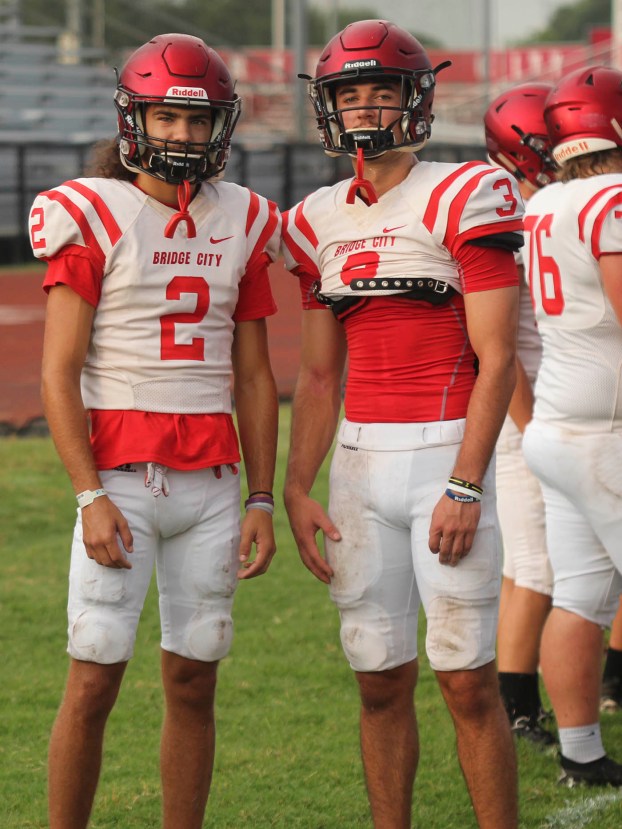 Van Wade/Orange Leader Bridge City seniors Gavin Garrett (2) and Ethan Oceguera (3) look for a strong season out of the Cardinals.

After a disappointing 1-6 finish to their 2020 season, the Bridge City Cardinals are back with a new energy. Quarterback Ethan Oceguera and wide receiver/defensive back Gavin Garrett are both looking forward to their senior seasons and have some goals in mind for the upcoming year.

Oceguera set his sights high, saying, “I want to be the district MVP, and definitely first-team in district. As for team goals, we’re going to win a district championship and make a run in the playoffs.”

Garrett echoed those same expectations- he also hopes to make all-district as an individual, and help the team make a deep playoff run.

One thing the seniors take pride in is their leadership. Oceguera says, “It means a lot to be a leader. It’s not easy to do, but having the team look up to you as a leader is something you just have to trust in yourself for.

Garrett also added, “It feels good to be a leader and have people looking up to you. We’ve got a bunch of great guys out here and it’s a fun group to be around too.”

Of course, the biggest story this season for Bridge City will be their new head coach, Cody McGuire. The new hire most recently worked as an assistant coach at Austin Westlake, a 6A powerhouse coming off back-to-back state titles.

With McGuire bringing a new energy to the program, things seem to be looking up for the Cardinals this year. Oceguera told us, “The energy from day one was there. The atmosphere just changes when you walk through the door. Coach McGuire is a great guy, and I’ve never trusted anyone on the first day more than him. Trust is always a great thing to have with coaches and we’re glad to have him.”

Garrett also raved about the new hire. Asked about the new coaching, he says, “It’s great. The energy on the field, in the weight room, everywhere has changed. It feels great. Everyone’s happy to be here and we’re ready to win.”

Garrett is ready to contribute however he can; he’s lining up on both sides of the ball this year. His experience playing both receiver and defensive back has “Definitely been hectic. There’s not really any breaks. Having new plays on offense and new plays on defense, it’s a lot to take in- but I’m ready.”

Oceguera also put in work over the offseason, attending a football camp at Baylor University. He explained that he honed his skills by participating in new drills at camp and added some praise for Bridge City’s new offensive coordinator, Kurt Zihlman. Oceguera added, “Coach Zihlman was excited and impressed and half those drills I learned were the ones he gives us. He knows what he’s talking about and I’m happy to have him too.”

The 2020 football season came with some caveats brought about by the COVID-19 pandemic, but things seem to be getting back to normal. Most schools are excited to have a normal season, which means the world to the seniors.

Oceguera says, “Pep rallies won’t be outside- they’ll be in the gym again, and just getting back to normal feels good. Especially in the summer, getting out here and getting to work out and throw with our teammates is great. I’m glad we’re about back to normal.”

Garrett expressed the same sentiment. He says getting to have a normal senior year is much better. “After games we’ll get to visit with friends and family instead of going straight back to the locker room. It’s definitely nice.”

Ultimately, the Cardinals have a real shot at making some noise when the season begins. With their senior leadership and new coaching staff, 2021 might just be their chance to bounce back.

Cardinals look to rise up in McGuire’s first season

BRIDGE CITY – Aspirations are high in Bridge City as the Cardinals will look to shine under first-year head coach... read more