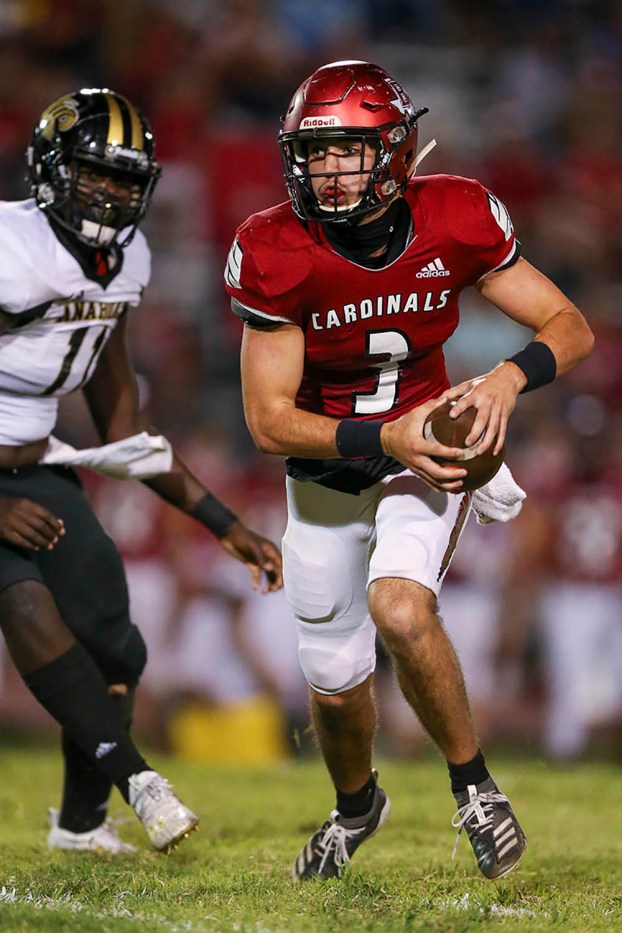 Cardinals look to rise up in McGuire’s first season

BRIDGE CITY – Aspirations are high in Bridge City as the Cardinals will look to shine under first-year head coach Cody McGuire.

McGuire brings more than 20 years of coaching experience as a top-notch assistant coach.

As an assistant coach for Austin Westlake for the last three seasons, he helped lead the team to back-to-back 6A State Championships and completed a prefect 14-0 season in 2020.

At Westlake, McGuire coached under Port Arthur native Todd Dodge. Now McGuire will have his sole intentions on getting the Cardinals to the postseason.

“It’s been awesome so far,” said McGuire. “Everyone on the staff and administrators have welcomed me with open arms. The kids here are super. They have worked so hard over the summer and they are picking up a new system very well. The senior kids have really stepped up and are leading the way. Our numbers are good, we started the first practice with 101 players, which is solid. We’re just ready to get things cranked up.”

Bridge City struggled to a 1-6 record last season and only one District 11-4A Division II win.

“We want to improve every time we step out on the field,” said McGuire. “A lot of work has to go into it, if you want to be successful. You just can’t take a ‘magic pill’ and go out there and win every game, you have to play every down. The kids are buying in and they are listening well in everything that the staff is teaching them.”

The Cardinals have plenty of experience returning, including nine starters on offense and five on defense.

Senior quarterback Ethan Oceguera (Second Team All-District) is back to spearhead the offense for the third straight season. Oceguera passed for 848 yards and eight touchdowns last season. The Cardinals are looking forward to running out of the spread set this season.

“It’s so great to have Ethan back,” said McGuire. “He’s a great competitor and one of those natural-born leaders. He’s excited about our offense. For those that know football around Southeast Texas, we plan to run an offense similar to what Beaumont West Brook has been running the last several years.”

Justin Abate will back Oceguera up and the Cardinals will utilize him in other spots as well.

Junior running back JimSharon Bearden returns to the mix as well after darting for almost 500 yards and a pair of scores. Senior Dorian Pruitt is also versatile and can line up at multiple positions after toting the leather last season.

“We feel we have a nice combo we can utilize in the backfield,” said McGuire. “Bearden is super strong and is a hard runner that can get through people. Pruitt is more of a speed guy that will get some carries but will catch balls out of the backfield as well.”

Back to haul in Ocerguera’s passes is J.T. Fielder, who was First Team All-District last season after hauling in 22 receptions for 235 yards and a score. Several others will be involved in hauling in receptions, including seniors Joseph Murty, Gavin Garrett and Deegan King along with juniors Kyler Garlaska, Cale Breaux and Matt Livingston and Braylen Collins.

“We’ve got some nice depth and experience at receiver and tight end for sure,” said McGuire. “If we can come out and get our running game going, that will really open up the passing attack, because we want to have a pretty even mix, we want to sling it around.

“We’re counting on those guys to step it up,” said McGuire. “We’ve got to get that surge going up front to give our backs room to work. Ethan can really scramble around well, but we must be able to protect him better in pass protection.”

The Cardinals have a strong anchor on defense in All-District linebacker Harrison Gauthier, who notched 78 tackles, seven for losses last year. Linebacker is a strength as the Cardinals also have experience in Bearden, senior Trey Hebert, junior Noah Broussard and Cale Newsome.

Garrett, King and Pruitt bring back experience in the Cardinal secondary with Rayburn Hebert factoring in as well.

The Cardinals are looking for some young guys to step up and power the defensive line.

We’re looking at several guys to step in and fill some huge roles for us up front,” said McGuire. “The scrimmages will give us a good look at where we are at with those guys.”

The Cardinals will crank up their season Aug. 27 when they visit Buna. They will start District 11-4A Division II play Oct. 1 when they travel to Hamshire-Fannett.

“We have a pretty good non-district schedule and we all are looking forward to heading to Buna for that opener,” said McGuire. “Then we’ll have Tarkington, Huffman and Anahuac ahead of us. It’s a good schedule, and one we think will get us ready for a tough, tough district.”

Bridge City is seeking its first playoff victory since 2016 when the Cardinals advanced to the Class 4A Division I Region III semifinals and the Cardinals will look to navigate through a rugged District 11-4A Division II to reach the postseason.

“When you think about this district and you want to win it, you know you have to go through West Orange-Stark,” said McGuire. “The prestige of that program goes way back and Coach (Cornel) Thompson is a legend around these parts and always gets every ounce out of those kids. Silsbee is always in the mix and makes deep runs with the skill set they have. Orangefield has that tough mental and physical concept and Coach (Josh) Smalley does a great job there. I’m learning more and more about Hamshire-Fannett, Hardin-Jefferson and Liberty as I go along. It’s going to be a battle every Friday night for sure. In football, it’s all about execution, not making silly mistakes with penalties or turning the ball over. Every game is a challenge, whether it is Week 1 or in the playoffs. The kids are fired up about the season, the staff has been getting after, we’re just ready to line up and get out there and go.”

ITTLE CYPRESS – There is no question that when Little Cypress-Mauriceville’s Trinity Williams’ big kill shot went over the net,... read more