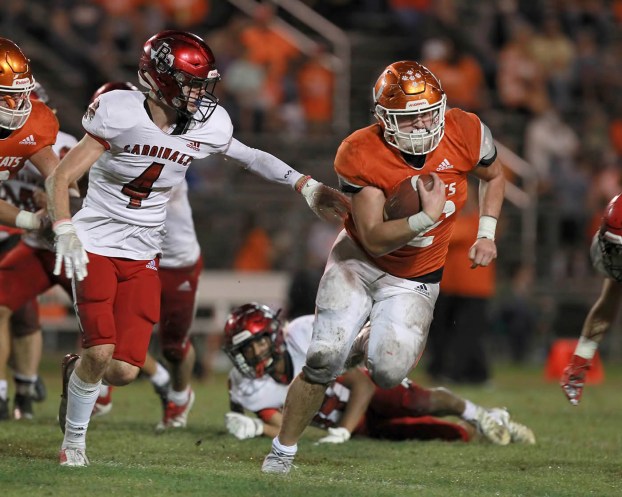 Bobcats getting ‘defensive’ in quest for playoff spot

ORANGEFIELD – After a superb season in 2019 in which they went 9-2 in their last season in the Class 3A Division I ranks, the Orangefield Bobcats proved they could once again compete in Class 4A as they made the playoffs, like they have had before, out of a tough District 11-4A Division II race.

This year, the Bobcats and long-time Coach Josh Smalley will once again be in the hunt for a postseason berth and will try to improve on their 4-5 overall mark from a season ago.

“We felt like we competed with everyone pretty well last season,” said Smalley. “That’s something that we’re all proud of around here, is that we may not be the biggest or the fastest but our kids flat-out compete and work hard. So many of them are expected to play on both sides of the ball again and they are aware of that and it makes them work that much harder.”

The cupboard is far from bare in Bobcat Country, especially with eight returning starters back off a strong defense.

Under new defensive coordinator David Kendrick, the Bobcats are switching from a 4-3 defense to a 3-4.

The Bobcats ranked second in District 11-4A Division II last year in total yards allowed, right behind West Orange-Stark, and will look to be stout again.

“That’s a big plus to have that many guys back on that side of the ball because they stepped up and played well last year, despite being a young defense so that experience is going to hopefully pay off,” said Smalley. “We are switching our scheme, and that has to soak in but they have adjusted to it pretty well thus far.”

The Bobcats have two outstanding All-District linebackers returning to the mix in seniors Brayden Babineaux and Macoy Marze, Lane Evans and Beau Elkins getting plenty of time as well along with incoming sophomores Kyle Michael and Lane Gipson.

“We’ve got some strong caliber guys that made all-district like Ashworth, Norwood. Babineaux and Marze that should really lead the way for us in that front seven,” said Smalley. “We do have a little depth on the defensive front and offensive line so hopefully we’ll be able to shuffle a lot of those guys in and out.”

Standout jack-of-all-trades Cameron Dischler will be moving from linebacker to strong safety this year.

“Dischler is one of those guys that can do it all,” said Smalley. “He’s what a lot of coaches like to call a ‘Swiss Army Knife”, because he can do so many things. He’s going to have to get use to being eight yards off the ball instead of two but he has a shot at being an excellent safety.”

The secondary has two veteran seniors in Tyler Shearin and Cade Smith.

“Two quality guys right there,” said Smalley. “Smith is going into his third season starting. Shearin, he made a lot of big plays last season, including a few interceptions that really helped us set the tone in a couple games.”

Offensively, the Bobcats will be replacing two-year starter Gunner Jones at quarterback. Junior Brayden Parker looks to be the one to fill the bill in Orangefield’s Slot-T offense.

“Brayden practically took every snap at the JV level last year,” said Smalley. He has a great demeanor and desire and nothing really rattles him. After a couple scrimmages are in his system, we think he should adjust to the varsity level quite well. We also want to be able to throw the ball a little more this season and he has a pretty good arm.”

Smith and Dischler are the backup quarterbacks.

“Dischler can step in and basically play every position on offense except on the line, we will likely line him up anywhere,” said Smalley.

Ashworth, All-District at fullback, is back after bruising his way to 626 yards and six touchdowns.

“Hunter is back and came into practice in tremendous shape,” said Smalley. “He’s a solid 220 pounds and he’ll get his share of carries again. We depend on him a lot on both sides of the ball and he has a great motor. He’s one of those kids that never wants to come off the field.”

Dischler had some solid outings at halfback last season and will see plenty of totes and Marze, Spears and Babineaux all have experience toting the leather too.

“We have some depth in the backfield again,” said Smalley. So many of those guys help in running the ball and also start on defense. We try to keep them fresh, that’s why everyone sees our guys have eight to nine carries a game.”

When the Bobcats put the ball in the air look for split end Sampson and tight ends Maddox and Frederick to haul them in.

The Bobcats have strong anchors returning along the offensive line in All-District performer Hunter Norwood, Coby Coulter and Cutler Hubbard. Lane Ponfick and Kolbie Sowell will also look to pave the way for the stout running attack.

The Bobcats will get their 2021 season going Aug. 27 when they welcome in the Anahuac Panthers. Orangefield will start District 11-4A Division II play Sept. 24 when they play host to the Silsbee Tigers.

“We have Anahuac, Woodville, Livingston and Buna in non-district,” said Smalley. “It’s good to keep those old rival games like Buna, Anahuac and Woodville on our schedule from our 3A days. Livingston will be a battle. Those guys won their district last year and we gave them a great battle.”

The Bobcats have made the playoffs seven of the past eight seasons but are seeking their first postseason win since 2015 when they defeated Houston Worthing 37-28 in bidistrict. Coach Smalley knows the Bobcats have to navigate a tough 11-4A loop to get to the playoffs again.

“Across the board, our district is one of the toughest, if not the toughest Class 4A district in the state,” said Smalley. “We have West Orange-Stark (No. 4) and Silsbee (No. 18), that are always ranked high in the state poll every year and they both always have tremendous athletes and go deep in the playoffs. Bridge City is going to be better and everyone is fired up over there with Coach (Cody) McGuire looking to build them up. Hamshire-Fannett has almost everyone back and they have some excellent skill people. Coach (Dwayne) DuBois always has the Hardin-Jefferson Hawks ready to battle. Liberty is always scary. They had a pretty strong defense last year with most of those guys coming back. Every Friday night, you better bring everything you’ve got, there are no nights off.”

“There are plenty of things we need to concentrate on, like our new defensive scheme and we’ve got to find some type of kicking game, and we’re looking at several different guys there,” said Smalley. “There is always something to work on and to improve at. After our scrimmages and four good non-district opponents, we’ll know where we are at. You want to get better each week before district starts.”

By Keagan Smith Orange Leader After a disappointing 1-6 finish to their 2020 season, the Bridge City Cardinals are back... read more