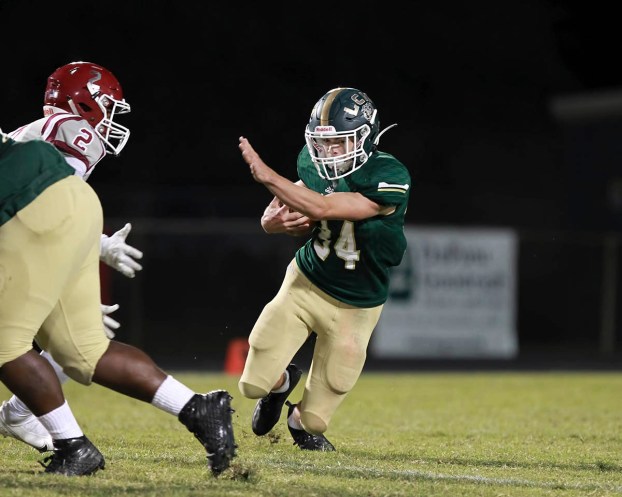 LITTLE CYPRESS – Everyone is pumped up in “Battlin’ Bear Country” as Little Cypress-Mauriceville looks forward to turning things around under the leadership of first-year head coach Eric Peevey.

Peevey a former assistant coach at both Orangefield and LC-M, had a tremendous stint as an assistant at Beaumont West Brook before taking over the Bruins program as head coach.

Coach Peevey helped lead the Bruins all the way to the Class 6A Division II State Championship Game in 2018 where they lost a hard-fought 35-34 decision to Longview. He notched a 33-15 overall record at West Brook with four playoff appearances.

Now he will look to help the Bears turn the corner and get back into the playoff chase after a 1-7 campaign last year in which they won just one District 10-4A Division I tilt.

“I’m so proud of the kids and what they shown us over the summer, they all have bought in on what we want to accomplish,” said Peevey. “The numbers were amazing throughout the summer and they all pushed everybody. One thing for certain, the Bears are going to be stronger this year. What the staff and I or thrilled about is our senior group this year. Those guys are so hungry and they’ve been up here almost everyday. The coaching staff is fired up and ready to go, We’ve come in and changed a lot of our schemes both offensively and defensively and the kids have picked that up wonderfully.”

Peevey and staff will see five starters return on offense and seven on defense.

“Offensively, will want to be able to run the football first,” said Peevey. “If you can’t run the football, it keeps you from doing other things you want to do successfully. We’ve stressed that. We would eventually love to be 50/50 running and passing, but it’s the running game that establishes that for you. Our offensively line this year, I think everyone will see a tremendous improvement.”

The Bears certainly have a versatile quarterback returning in senior Ashton Landry to help run the spread offense. Landry passed for 1,017 yards and five touchdowns and rushed for 686 yards and three scores as a junior. Junior Dean Reynolds could also see time at QB and in the backfield.

“Ashton has come a long way since his surgical procedure he had in late spring, early summer,” said Peevey. “He’s got the ‘green light’ and is at 100 percent. He caught up so quickly with a late surge in the summer. He inspires everyone around him. He’s a tremendous athlete, he proved that last season.”

Reynolds will be all over the field for the Bears as he will line up at tight end, some in the backfield and will start at linebacker and punt as well.

“Dean is one of those kids you could almost play at every position,” said Peevey. “He loves the game and is so smart and precise at everything he tries to accomplish.”

LC-M has three solid backs in the mix including junior Da’Marion Morris (428 yards, 2 TDs), so versatile on offense and defense, senior Andy McDow and senior Dwight Davis, who had a solid run as an Orangefield Bobcat. Davis is now at LC-M for his last year as he joins his father John Davis, who is the Bears’ defensive coordinator.

“We’ve got to get the ball in Morris’ hands more this season because he’s so explosive,” said Peevey. He’ll line up in the backfield and we can put him in the slot for those quick passes and he’s so dangerous in the return game. McDow is hard-nosed and we can count on him to get those tough yards and we’re leaning on him at Mike Linebacker too. Davis was such a sparkplug at Orangefield and he’s going to be huge for us both in the backfield and in our secondary.

The Bears bring back some nice experience at the receiver positions in seniors Nathan Granger and Keaton Rives along with fellow seniors Carson Peet and Evan Barborek. Junior D.J. Roberts and sophomore Alantheon Winn will be in the mix in hauling in passes as well as tight ends Reynolds, Owen Dolbear and Jordan Pollock.

“We’ve got some guys back with experience in those spots that can make big plays,” said Peevey. “Watch for Winn, he’s just a sophomore and always been in just basketball but he has come out and he will be capable of making some big catches.”

LC-M will be seeking several players to step in and fill huge roles along the offensive line, which returns just one starter in senior center Gunner Johnson.

Khaleen Johnson, Eduardo Mares and Brady Wright will all see time at guard with Jan Nazario and Slayde Barker at the tackles.

“We’ve got to make strides on offense, because defensively, we were not that bad last year, it was on the field too much,” said Peevey. “Watching film from last year, we seemed to shoot ourselves in the foot. We would move the ball and then somebody would miss an assignment, causing a turnover, or we would get some of the worst mental penalties. That’s what we want to clean up. Our district is so competitive, a mistake here and there, no matter what it is, can cost you in a hurry.”

10-4A Defensive Newcomer of the Year junior Amir Washington returns to anchor the LC-M defensive front.

Joining Washington along the front will be fellow ends Jarvis Riley and Gianni Huffman with Barker, Pollock Jose Molina and Jonathan Gilbeaux playing at the tackles.

The Bear secondary should be solid with the return of Peet (78 tackles) and Morris. Davis will be back there as well after starting for Orangefield while Roberts and senior Ezavier Smith and Barborek will also be factors.

The Bears will open up their season on the road at Hamshire-Fannett Aug. 27. They will start District 10-4A Division I play Oct. 8 at Huffman.

“We have a very formidable non-district schedule,” said Peevey. “Hamshire has a ton of kids back. WO-S is simply loaded as always. Katy Jordan has 2,400 students and we get to go play them in Katy on a Thursday. Woodville is tough all the time and have a ton of kids back and then there is Houston Kincaid, who has excellent skill people and is one of the top teams in TAPPS every year.”

LC-M has made the playoffs six out of the last eight years, but have won only one playoff game since 1997, a 48-21 bidistrict victory over Stafford in 2019.

Peevey feels District 10-4A is up for the taking and every team will be in the mix in chasing the district title.

“Looking at it, we’ve got Huffman on the road right out of the gate at their place to start district and they have been so consistent over the years in our district and they have a ton of players back,” said Peevey. “Then Vidor will roll into here and Coach (Jeff) Mathews has always done a tremendous job with that program. They are always so physical and you better do something when you have the ball against them because they love to limit your possessions. Splendora always had a great deal of talent and usually have a great running game. Livingston won the district last year and may have the district’s best athlete in their quarterback (Daniel Ruiz). Lumberton has a whole new staff and we know those kids will compete. It’s going to be a dogfight every Friday night.”

Peevey feels the Bears will be in the mix all the way.

“The kids are buying into the system and that’s a great thing, but you still have to go out their and execute everything and execute it well,” said Peevey. “We want to be more physical this year and show everyone that we want to put up a fight and be tougher. If we can do that, we’re going to be a pretty darn good football team.”

By Keagan Smith Orange Leader With the highest winning percentage of any high school football team in the state of... read more