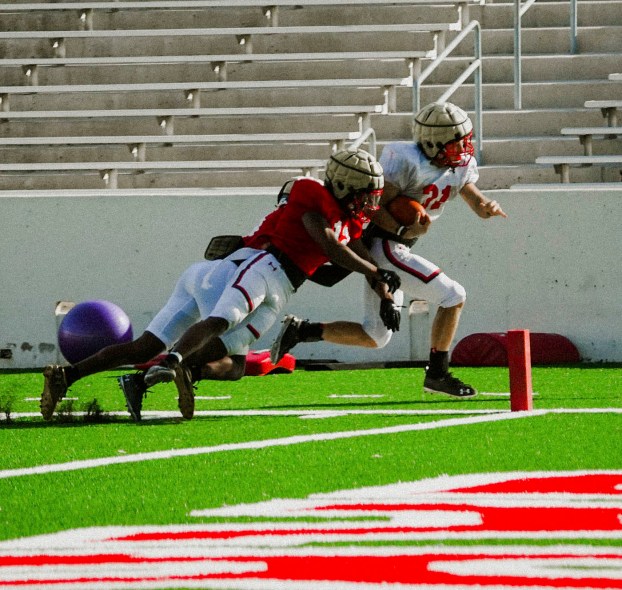 Lamar had an exciting Red-White scrimmage over the weekend.

BEAUMONT, Texas – Lamar University’s offense rolled up 344 yards of total offense Saturday morning, but it was the defense that came away with more highlights in the team’s first scrimmage on the new playing surface at Provost Umphrey Stadium. The defense limited the offense to just three scores (two touchdowns) on the day.

“Certainly, after every scrimmage you will need to go back and breakdown the film to gain an accurate picture, but I thought we competed well today,” said second-year head coach Blane Morgan. “Like every team at this point in the season we have a very long way to go. We have a lot of young guys who we need to get plenty of reps, but the initial reaction is we’ve got some good young players and it’s exciting to see this team grow together.”

In addition to limiting the Cardinals offense to just three scores, the defense forced two turnovers (one interception and a fumble recovery), 15 tackles for losses (including six sacks) and recorded five quarterback hurries.

The defensive effort was led by freshman inside linebacker Blake Gotcher who finished the day with six total tackles, including four for losses, and two sacks. Gotcher was one of five different players to record a sack on the day.

Freshman defensive back Alex Meeks recovered the lone fumble of the day, while classmate Damian Alexander picked off a Mike Chandler pass and would have returned it for the score had the play not been called dead after he broke into open space.

The Cardinals offense finished the day with 192 yards passing (with two touchdowns) and 152 yards on the ground. The LU coaching staff was able to look at 10 different players who recorded a rush Saturday. Big Red’s ground attack was led by junior James Jones’ nine carries for 41 yards. Sophomore Chaz Ward tacked on five carries for 25 yards, while returning starter Jalen Dummett had four rushes for 34 yards.

“We wanted to get a certain number of plays with our ones, twos and threes,” said Morgan. “In the last drive I think we were able to catch up in terms of plays with our threes. Right now, we just have so many in our threes who need reps and to get out there and play football. It’s a good problem to have because that means we have numbers now which creates healthy competition.”

The signal callers ended the scrimmage 13-of-27 for 192 yards and two touchdowns and the lone pick. Freshman Daelyn Williams was the most accurate quarterback on the day completing 6-of-10 (.600) attempts for 107 yards and two touchdowns. Dummett was 3-of-7 for 24 yards while sophomore Mike Chandler completed 4-of-10 for 64 yards and an interception.

The offense got out to a quick start with three big running plays – consecutive 10 yard-runs from Jones followed by a 16-yard gainer from Dummett after being flushed out of the pocket. After that the defense stepped up to force back-to-back negative-yard plays to end the drive.

It was a slow start to the day for the quarterbacks as LU converted on only two of their first five attempts, but the second attempt of the day went for 61 yards and a score (Williams to freshman Dozie Ifeadi). The grab was Ifeadi’s lone reception but he made it count.

After the No. 3 offense scored on its opening possession, the defense tightened the screws. The D put the offense back on its heels by recording a sack followed by another tackle for a loss on consecutive plays. The next offensive possession resulted in a missed Bailey Giffen field goal (from 32 yards out). The Cardinal kickers were 1-of-2 on field goal attempts Saturday with freshman Colby Sessums converting his lone attempt (39 yards).

The Cardinals other touchdown came late in the scrimmage following a drive from the No. 3 offense. After being forced out of the pocket, Williams did a good job of extending the play until a receiver could get open. Just before stepping out Williams found classmate Canden Grogan alone in the middle of the end zone for the score.