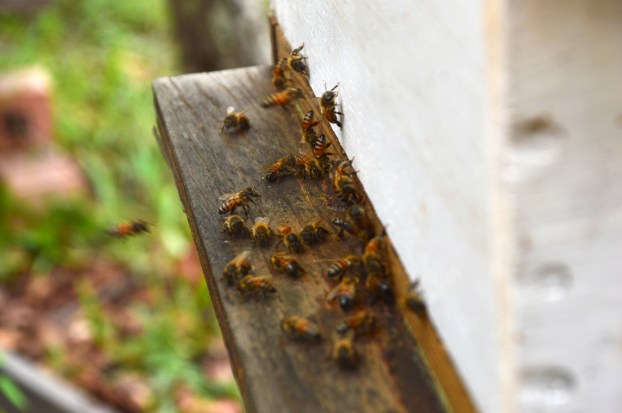 Appreciating the honeybee this Saturday

This day was first established in 2009 for beekeepers, as a way to promote honey and to encourage educational programs.

The honey bee is the only insect that produces food eaten by man. A honey bee can fly for up to six miles, and as fast as 15 miles per hour, hence it would have to fly around 90,000 miles -three times around the globe – to make one pound of honey. It takes one ounce of honey to fuel a bee’s flight around the world, according to americanbeejournal.com/.

Those days of collecting nectar and pollen for the hive is instrumental in the health of the hive.

“If they are exposed to sublethal chemicals it shortens their lives,” VanMarion said. “If their life is shortened by one day, that is a 5-percent lose in honey crop. Add in hurricanes, and freezes, they have a tough time trying to survive.”

“Bee Keeping today faces challenges that were not on scene 40 years ago,” beekeeper Chick Collins said. “Back then we had foul brood and wax moths. Now, with migratory bee keepers moving hives up north for the apple pollination, then to California to the almond fields, and back to SE Texas to winter, we are being exposed to anything from here to there.”

American foulbrood (AFB) is a fatal bacterial disease of honey bee brood caused by the spore forming bacterium Paenibacillus larvae. It is not a stress related disease and can infect the strongest to the weakest colony in an apiary, according to beeaware.org.au

There are approximately 100 hobby beekeepers in Orange County. A hobbyist could have as few as one or two hives in their back yards or have up to 70-75 as VanMarion.

“I have a couple of hives in my backyard and I have some more at another location,” VanMarion said.

He has had hives for 15 years now.

“As a kid, we always had hives,” VanMarion said. “When I got married and we had kids, I got away from it. When I started, I had to learn again because so much had changed.”

He started by reaching out to local beekeepers which led to his interest in the Master Beekeeper program with Texas A&M.

“To my knowledge, I am the only certified Beekeeper in South East Texas,” VanMarion said. “It is a good program. It took four to five years to get through.”

He added the honeybees have difficult time because they do not have the immunity to the herbicide, and other chemicals.

“The honey is worth nothing,” VanMarion said. “There is more money in pollination services and selling queens.”

While he has obtained some hives through removal from a house, he said those hives do not have a good survival rate.

“Usually, they are removed in July to August when the nectar has stopped and you have to feed the hive,” VanMarion said.

Hobby beekeepers are not permitted to sell honey in the store, they must sell it directly to the customer, according to Orange County Environmental Health and Code Compliance Deputy Director James Scales.

“They have to produce less than 2,500 pounds a year and the honey must be produced in hives located in Texas,” Scales said. “They can sell from home, market or festivals, but the beekeeper must be present. There are some labeling requirements.”

“The main thing about getting local honey is, you get 100% honey from your area. You don’t get local honey by going into a local grocery store and buying honey with a “local honey” sticker on it,” Chick Collins said, “You have to buy from a bee keeper who lives right here, and maintains his hives here year around. Most honey you buy off the shelf, is honey blended from numerous sources. Look at your label. China is the world’s largest producer of honey. Chinese honey is also banned in the US due to the use of chemicals they use there, to treat their hives for various honey bee diseases. These chemicals are recognized by the US as being unsafe for people. Unethical businesses will import Chinese honey, repackage it as a product of their country, and ship it out to the U.S., where it gets blended into the honey we consume. When you buy honey from the man selling honey on the side of the road, or local Mom and Pop businesses, you are pretty much guaranteed you are getting good honey.”

Collins also warns of honey labeled as a blend.

“That not only can include honey from other countries mixed or blended, but also corn syrup or sugars blended onto the honey,” Collins said. “Next time you request honey at some of these fast-food places, read the packages. Some are labeled as honey “sauce”. This is mostly corn syrup.”

A piece of history stops in Orange

By Dawn Burleigh Big Boy No. 4014 stopped for approximately 30 minutes in West Orange on Thursday morning as residents... read more