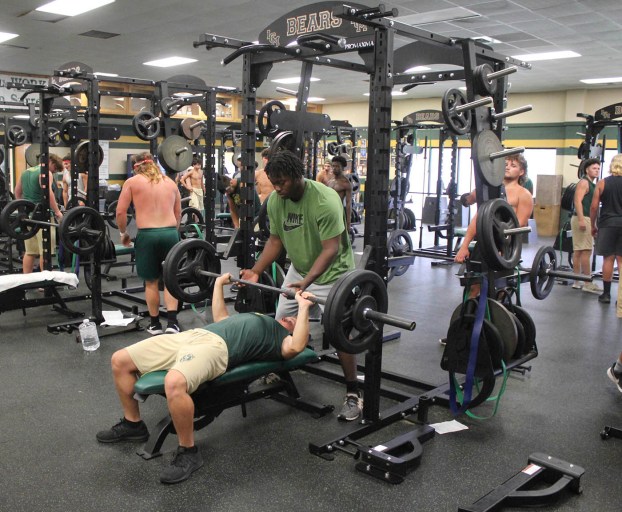 Van Wade/Orange Leader The LC-M Bears have been busy in workouts as they prepare for a big season ahead.

After almost two weeks of getting after each other to start football practice, area high schools will be hitting the scrimmage fields Friday to face someone in another uniform as coaches will have a great chance to see who is going to shine early on and will give them a chance to see which players can play where.

The West Orange-Stark Mustangs will head to Port Neches-Groves Friday to tangle with the Indians.

There will be an Orange County flavor at Little Cypress-Mauriceville Friday as the Battlin’ Bears will play host to the Orangefield Bobcats.

The Bridge City Cardinals will venture to Lumberton Friday to take on the Raiders.

The Vidor Pirates will play host to the Buna Cougars in a scrimmage tilt Friday.

Over at WO-S, the Mustangs will be on a quest to win their 12th straight district crown as they will look to continue their tremendous tradition.

The Mustangs have reached the Class 4A Division II Region III Finals nine out of the past 10 years under the leadership of Cornel Thompson and staff, that included a four-year run to four straight Class 4A Division II State Championship games from 2014-2017 in which they won two state titles in 2015-2016.

WO-S returns nine starters on offense and five off defense from a 8-1 unit that reached the area round of the playoffs.

The LC-M Bears will look to make the playoffs again as Eric Peevey has brought plenty of enthusiasm as the Bears look to bounce back from a 1-7 campaign. LC-M has made the playoffs six of the past eight years.

The Bears have five starters returning on offense and seven on defense.

The Orangefield Bobcats look to zip back into the postseason for the second straight year for Coach Josh Smalley. The Bobcats return five starters on offense and eight on defense from last season’s 4-5 playoff unit.

The Bridge City Cardinals will look to find their way back into the postseason behind first year head coach Cody McGuire’s guidance after going 1-6 last season.

The Cardinals were a young squad last season and they return nine offensive starters and five on defense.

The Vidor Pirates will look to improve upon last season’s first year in Class 4A. Vidor made the playoffs with a 4-5 mark and Coach Jeff Mathews will see five starters return on each side of the ball.

Second scrimmages are set for everyone Thursday Aug. 19.

WO-S will visit Vidor, LC-M will welcome in Bridge City and Orangefield will travel to Lumberton.

The regular season cranks up for everyone Aug. 27 when WO-S travels to Nederland, LC-M visits Hamshire-Fannett, Orangefield will play host to Anahuac, Bridge City travels to Buna and Vidor will welcome in Silsbee.

ORANGEFIELD – The Orangefield Lady Bobcats cruised to a sweep in their 2021 volleyball season opener Tuesday night as they... read more