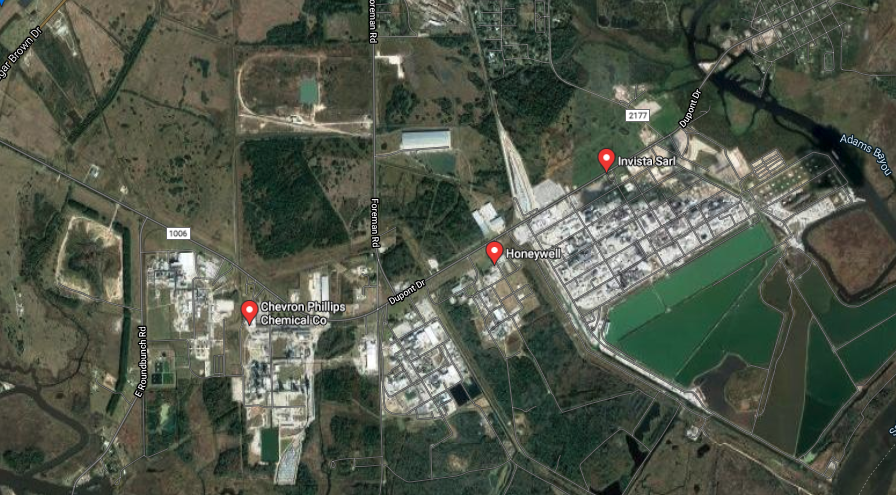 Courtesy of Google Maps An aerial view of Chemical Row in Orange, Texas.

Orange has a long industrial history starting in 1836 when the first sawmill was put into operation. There was a period of sawmilling in Orange that lasted nearly 100 years. After the timber was exhausted and the sawmills closed, the next industry that was established was the building of steel ships. That began in 1940 and caused a boom in Orange during the World War II years.

At the end of WWII, the third major industrial boom began. The Dupont company acquired 1500 acres of land west and south of downtown Orange and began to build a chemical plant. The plant opened in 1946. Other chemical companies acquired land next to DuPont and built chemical plants along Farm to Market Road 1006 in what would be called “Chemical Row.” That stretch of highway would become an initial $3 billion investment in Orange. There would be millions more invested over the years as plants expanded and new facilities were built.

Over the years there would be name changes as things changed in the industry and companies were bought and sold. Some of the later names were Gulf Oil Chemicals, DuPont Investa, Goodrich Gulf, Lanxess, Enterprise Petrochemicals, Chevron Phillips, Bayer, Honeywell, Dow-Dupont, and Dow.

Orange had been a favorable site for this industry and the land called Chemical Row was ideal due to its location near established railroad lines and the south part of the land bordering on the Sabine-Neches Waterway. There would later be easy access to Interstate 10.

Executive Director of the Orange County Economic Development Corporation Jessica Hill made a statement in 2020 about the importance of Chemical Row.

“Orange County does not have any refineries—what we do have is Chemical Row, with a strong base of companies that make chemicals and plastics, many using petroleum products that are refined by our neighbors,” Hill said. “We are not in competition with Jefferson County and Southwest Louisiana—rather we are ideal growth partners for our neighbors.”

Orange is unique in that among the cities in Jefferson County and Southwest Louisiana region it has no refineries, only chemical plants.

After the oil discovery at Spindletop in 1901, there was a rush to build refineries. Orange was too far away from the Spindletop field to be included in the refinery building rush. By the time the field at Orangefield was discovered, the major oil companies already had refineries in operation across the Neches River in Jefferson County so that it was much cheaper to run pipelines than to build any sort of refinery in Orange. Some crude oil was also shipped out of the field by barge down Cow Bayou to the Neches River, then to the refineries in Jefferson County.

When new products were needed for war production, plastic was one of the new products being developed, along with nylon and other materials that could be manufactured from petroleum byproducts.

Refineries produce mainly fuels like gasoline, kerosene, and diesel fuel along with petroleum coke. The byproducts from the distillation process include ethylene, benzene, cyclohexane, toluene, and a few others that become feedstocks for chemical plants.

Forward thinking men in Orange campaigned to have DuPont build a plant in Orange. Land was made available at an attractive price. DuPont became convinced that Orange was a most favorable location for a new facility. Feedstocks from area refineries could be brought in by rail, pipeline, or water. There was an available workforce in Orange since Orange had grown due to the number of workers needed for the war effort. Some of those who had moved to Orange for the war effort wanted to find work and stay in Orange.

Seeing the success DuPont had in Orange and the favorable conditions for building, other chemical companies began to locate in Orange.

Keeping a workforce in the chemical plants in Orange and the refineries and chemical plants of the region is so important that Lamar State College Orange teaches courses in Process Operation and Industrial Technology to prepare those wishing to find employment in the petrochemical industry.

Chemical Row is so unique that it has been photographed for postcards,  and for promotional information about Orange. The miles long string of lights is an impressive sight that Orangeites have taken visitors to see for decades.

January 25, 1999 was declared “Orange County Day” by the State Legislature. Orange County was honored with House Resolution No. 25. One section of the resolution read: “WHEREAS, Today, Orange County stands as one of Texas’ most forward-looking regions from the top of the 177 foot high Rainbow Bridge over the Neches River and the canebrakes below to Chemical Row, an extraordinary miles-log run of steel, glass, catwalks, and flames, Orange County is indeed special to Texans.”

Abbott to speak at Reagan-Trump Roundup in February